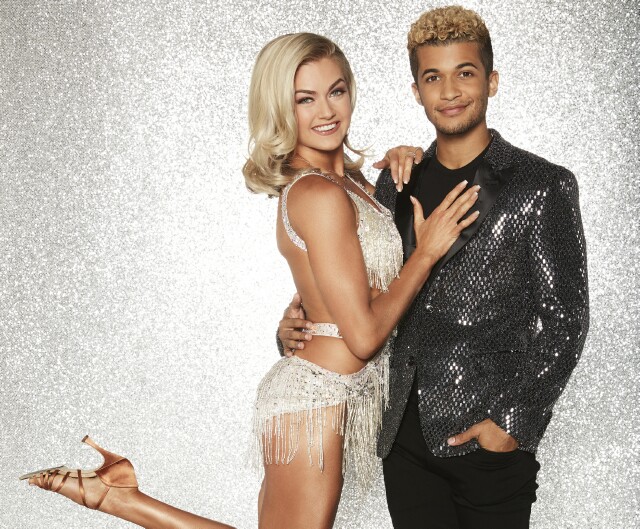 What would an installment of ABC's Dancing with the Stars be without the drama?  Last night’s semifinals were no exception.  It came courtesy of pro-dancer Lindsay Arnold when the Season 25 front-runner was injured rehearsing a troupe dance on Sunday, leaving partner Jordan Fisher in doubt that the couple could even compete.  (Arnold had to dance wearing a knee brace.)  As if that injury wasn't enough, Arnold inadvertently scratched Fisher’s cornea during Monday’s dress rehearsal, causing the star a great deal of anguish.  Despite slipping by two points last night they still finished with a solid 59 out of a possible 60 -- and they are still in the lead heading into the finals.

"It's been a tough week," Arnold told MediaVillage after the show.  "The semifinals will do it.  [My knee] feels okay today and okay when it's in the brace; that's why I've had this lovely friend on my leg all night.

"Honestly, I knew I was going to dance with Jordan tonight and do whatever I had to do to make it happen," she continued.  "I wasn't going to miss out.  I'm making sure I look after myself this week and I'm ready to go next week."

"It was a tough week, I'm not gonna lie," Fisher added.  "Everything hurts at this point; lights hurt, blinking hurts, keeping my eyes open hurts and it's hard to see. It was one of those freak things; nobody would ever do something like that on purpose or expect for that to be a thing to think about during the competition.

“Can you imagine she sabotaged me?” he laughed.

“This has really been the hardest couple of days of the entire competition,” Fisher admitted.  “We're just grateful we were able to pull this off with just one good leg and one good eye, like a pirate, and still we managed to make it to the finals.  My parrot's at home in bed and we're both headed to our respective places and looking forward to getting some good rest for sure."

Sadly, it was curtains for Paralympic Gold Medalist Victoria Arlen and partner Val Chmerkovskiy, despite finishing the night with solid 56 out of 60.

"Victoria going was really sad, to be honest," Malcolm in the Middle star Frankie Muniz, one of her competitors, said after the show.  (Her distress was evident on camera.)  "We became close and before every performance, she would come up and give me a motivational speech. She was just so supportive and awesome."

Overall it was a good night for Muniz who, along with partner Witney Carson will be advancing to the finals.  Muniz himself risked great injury reenacting a feverish Paso Doblé (originally performed Apolo Anton Ohno and Julianne Hough in Season 4). Thankfully the strenuous knee work required didn't prove problematic for the star, whose knees already are strained.

"I was kind of expecting it all week," Muniz said.  "We pretty much did everything that [Ohno and Hough] did.  [The knee dips] were one of the most iconic parts of the dance.  I wanted to do it but I'm so afraid of my knees because they are so bad.  But I got through it; they're really bruised but nothing tore so that's a positive."

Pro-dancer Mark Ballas was thrilled to be advancing with partner Lindsey Stirling, yet had some explaining to do last night over his comments this past weekend about his future with the show.   The quotes about him possibly not returning next season gained traction and he was happy to dispel them.  "I don't know who started this bollocks," he laughed.  "Let's just leave it there; people exaggerate."

Property Brother Drew Scott and partner Emma Slater couldn't believe the news that they, too, would in the finals.  “I had to do a second take,” he beamed.  “Did they say we were going home or we were staying?  I'm on cloud nine right now; still shaking because I’m so excited.”

Scott also made DWTS history last night as the first male contestant to perform in a kilt, one that was shorter than his female partner’s tartan skirt.  “It's a first!  It was the length of me, so maybe it was the same size,” he joked.  “Honestly, I felt more comfortable in that than any other outfit because I'm Scottish.  I'm wearing a kilt at my wedding.”

Dancing with the Stars two-part season finale will be telecast on Monday and Tuesday at 8 p.m. on ABC.