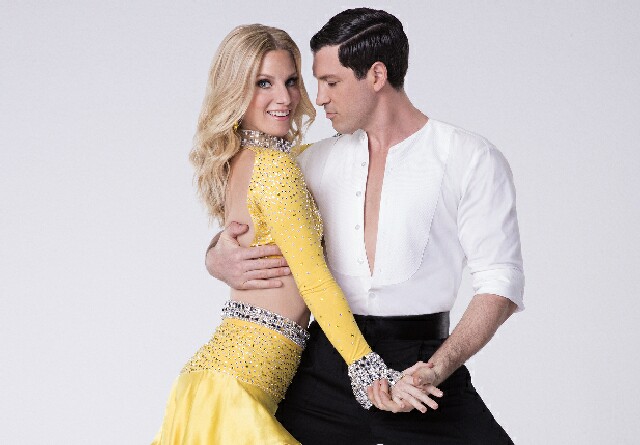 Dancing with the Stars ballroom bad boy Maksim Chmerkovskiy returned to the ABC show Monday night, albeit still in a sidelined capacity. After tearing his calf muscle during rehearsals for last week’s energetic jive, Chmerkovskiy flew to Cleveland, Ohio, to undergo surgery, leaving celebrity partner Heather Morris (pictured above with Chmerkovskiy) to continue her journey in the capable hands of DWTS pro Alan Bersten. But just because Chmerkovskiy is out for the moment doesn’t mean he’s entirely down for the count; he supervised his partner’s tango for this week’s show via Skype. With the surgery behind him, the DWTS champ was back in the studio Monday night and hopes to be dancing as soon as possible. (MediaVillage.com’s behind-the-scenes coverage of Dancing with the Stars Season 24 continues below.)

“Yes I feel unprecedentedly amazing, if that makes sense,” Chmerkovskiy told me after the show, one that saw his partner awarded 33 out of 40 points for her routine.  “My goal is [to return the week after] next week. This week I didn’t want to do something stupid and regret it. I want to do the right thing and if this is the result of one week I’m sure I’ll be more than ready.”

Chmerkovskiy said that his recent decision to cut sweets from his diet “somehow prepared” his body for the worst and actually accelerated his recovery. “I don’t want to jinx it,” he explained, “but the week that it happened I was going through some stuff and I put so much effort into really looking after my diet and lifestyle. It got to the point where I wasn’t even sure if it was worth it.  Do you really have to rid yourself of all of the sweets, desserts and things like that?  It was hard to justify when it was me against everyone around me saying, ‘Just relax and enjoy [some] sweets.’”

However, the pro was glad he did. At the Cleveland Clinic, three days after his injury, Chmerkovskiy’s doctor delivered a positive prognosis.  “Three days post-trauma I had absolutely no swelling or bleeding,” he said.  “The MRI showed a grade one muscle tear and even physically my leg didn’t look even a little bit hurt. I thought, maybe I was misdiagnosed? But I couldn’t step on it, I couldn't walk, so [after] the procedure it turned out that my body is primed to heal itself.”

While the procedure Chmerkovskiy underwent is described as revolutionary in sports medicine, the dancer prefers to credit his healthy lifestyle as the most revolutionary aspect of his speedy recovery.  “It’s like always being aware and ready to go,” he explained.

Chmerkovskiy said that since his surgery there has been a lot of interest from athletes who have suffered similar injuries, all wondering why they were on crutches for two-and-a-half weeks when he’s walking after three days.

“It’s pretty wild,” he exclaimed. “I’m going through this and I’m trying to get back to 100%. It’s [usually] a 4-to-6 week therapy process for this type of injury.  That’s well documented. There is a certain protocol athletes take when they get injured and we kind of ran ahead of time.”

According to Chmerkovskiy injuries in his field come with the territory. “No one likes being in pain,” he said. “Whenever somebody asks, ‘What is it like being a dancer?’ I say, ‘This is how it is.’ This is public and on TV, but it’s my reality, so being in the middle of rehearsals and having your muscle just blow up … it’s a process we’ve been through so many times before, be it a pulled ligament, broken bone, something dislocated or a muscle tear.”

Chmerkovskiy cites “the competitor” in him that is driving a prompt return to the competition.  When someone says “you don’t need to do this” it only makes him more determined.

“I want to do this and now I have an opportunity to do it better than I did it before I got injured,” he declared.  “I want to experience that and I want to do my best, come back and give Heather the best chance at winning this competition. I think she should be given the chance.”

For the new father the biggest downside to being sidelined from the competition was the weeklong separation from his infant son Shai, who stayed behind in Los Angeles with fiancé (and fellow DWTS pro) Peta Murgatroyd.  “Every day we would Face Time, and after I flew back it’s like he had grown twice the size,” Chmerkovskiy said.  “He’s now making different noises so of course I’m pissed that I missed it.”

Although he won’t be hitting the ballroom boards next week, Chmerkovskiy revealed he will be very present in the cha cha that Heather will be performing. “I’m going to be with Heather and Alan in rehearsal,” he smiled. “It’s going to be a joint effort.

Dancing with the Stars continues next Monday at 8 p.m. on ABC.