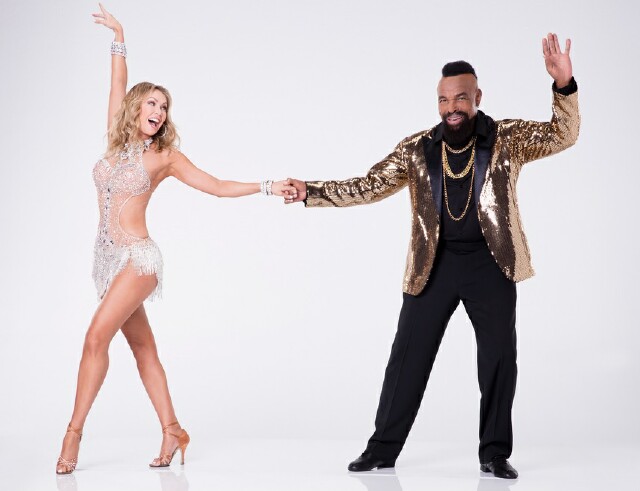 Dancing with the Stars pro Kym Herjavec, along with her season 24 partner Mr. T, survived last night’s first elimination round on the ABC series. The couple scored 22 for their paso doble, two points up from last week's cha-cha. However, their triumph was at the cost of fellow contestant Chris Kattan and partner Witney Carson, who were eliminated.

For Herjavec, her return to the show couldn’t have come at a better time. She married her DWTS partner Robert Herjavec (Shark Tank) in July 2016 after the couple paired for Season 20 of the show – and had no intention of returning to ballroom.

“It was a shock to me to come back,” she told me backstage after last night’s show.  “But it’s been so fun. I did try to stay in shape over the last couple of years and it took a little readjustment to kind of get the legs going; but I feel I’m really getting back into it.  Mr. T is the perfect partner for me.”

In addition to her DWTS coaching duties, her limited spare time has been occupied expanding her brand.  Herjavec will soon open a dance and fitness studio in the same hallowed Beverly Hills location once occupied by fitness guru Richard Simmons, where he taught his famed “Slimmons” classes.

“I wanted a fitness studio and I saw this article that Richard was closing the space down,” Herjavec revealed.  “So Robert and I drove straight down there.  There was a lady teaching and I asked if I could take over the lease and she said, ‘no.’

“I just couldn’t bear the thought of that space being turned into office cubicles,” she continued.  “So I spoke with the landlord and she felt the same way.  She said she was so glad someone was taking over the space and keeping it a fitness space because Richard did so much for so many people.  I’m hoping to continue that tradition.”

Simmons’ self-imposed exile in recent years has resulted in much conjecture regarding his health and safety.  Reports are he’s fine and now simply prefers a quieter life.  Herjavec knows only too well the lives Simmons touched during his time in the space.  In fact, her mother experienced it first hand.

“Mom is Australian and when she came to visit all she wanted to do was take a class at Richard Simmons’ space,” she recalled.  “That was three years ago.  It might have been one of his last classes.  I had an injury and couldn’t participate, but I saw what he brought to his classes and the energy that he gave.  It’s such a special space.  When I go in there it has his energy about it.  I’m there every morning checking on the construction work.”

Herjavec thanks her husband for instilling her newfound “multi-tasking” skills.  She’s up early dedicating hours to the studio’s refurbishment then training with Mr. T in the afternoon.

“I’m sort of managing both as we do open in a couple of weeks,” she explained.  “Juggling Mr. T and the studio, I do feel like a businesswoman/dancer.  It’s a totally different phase for me but it’s exciting because I get to do what I love and I’m learning a lot from Robert about business.  It is a little like Shark Tank at times.  He asks me about numbers and I’m like, ‘Agggghh!’  But I do need to know those things so it pushes me.”

One quandary the pro-dancer didn’t envisage was what to do with the famed “Slimmons” sign that has prominently hung in the space since 1974.  “I feel so bad taking it down,” she said.  “I really don’t know what I’m going to do.  I feel I may take it and box it or maybe frame it somewhere.”

Herjavec admits she’s yet to hear from the fitness guru regarding her taking over the space, but wants one thing known:  He has an open invitation to drop in anytime. “It’d be nice if he reached out and I’d love for him to come back and christen the studio,” she smiled.

In addition to the fitness classes, which she anticipates teaching four times a week, Herjavec plans to include an on-premises nutritionist making the studio a one-stop fitness shop.  Her DWTS fellow pros will be conducting private lessons there and she’ll be paying tribute to the man that started it all with a special themed class.

“One of [the classes] will be ‘80s Bod’,” she revealed. “It’s a throwback to Richard Simmons and Jane Fonda and I want everyone to come dressed up.  It’ll be like a flashback Friday thing.  There’ll also be a heels class where I teach people how to dance in heels and a class called ‘Bitchin’ Body.’  It’s all going to be a lot of fun.”

You might even see current partner Mr. T get in on the fun. “Once in a while I’m going to teach a class,” he told me last night after the show. “I can scream out ‘Billy stand up now! Don’t you be giving me any stuff Billy!’  It’s definitely hallowed ground to do that on.”

Season 24 of Dancing with the Stars continues Monday at 8 p.m. on ABC.