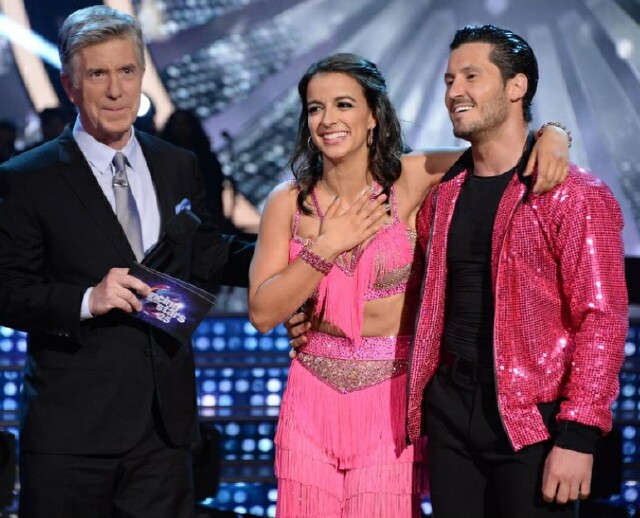 Season 25 of ABC’s Dancing with the Stars cha cha'd its way into primetime Monday night with a dazzling two-hour premiere with 13 couples competing.   This season the show pits social-media influencers, sports stars and actors against some seasoned stage performers, all of whom want to walk away with the Mirror Ball trophy -- or at least without injury.  Showbiz stalwarts like Nick Lachey (98 Degrees) and Debbie Gibson (of Electric Youth and Broadway fame) might once have been considered sure bets for a win (both have danced for years) – but the night produced four big surprises with the unexpected dancing talent displayed by TV host and actress Vanessa Lachey, former Malcolm in the Middle star Frankie Muniz, violinist/YouTube star Lindsey Stirling and ESPN personality Victoria Arlen.

Miraculous and inspirational were two words that came immediately to mind while watching Arlen dance.  She contracted Transverse Myelitis at age 11 which left her in a near-comatose state, unable to speak, eat or move (but aware of what was happening) for four years, and when she “awoke” she was paralyzed from the waist down.  She learned to walk again only a year ago, at age 21, albeit without feeling in her legs.  And yet she expertly executed a cha cha with partner Val Chmerkovskiy, scoring a 19 and high praise from judge Carrie Ann Inaba, who referred to her as a “revelation.”  (Arlen is pictured at top, center, with DWTS host Tom Bergeron, left, and Chmerkovskiy.)

Vanessa Lachey and partner Maks Chmerkovskiy’s intense cha cha earned the duo a 21, while Stirling’s cha cha had her tie for top of the leader board (alongside Jordan Fisher) with a 22.

Thanks to his breakout performance as Doody in Fox’s Grease Live! newcomer Jordan Fisher had some experience with live television. He’s also been appearing on-stage in Hamilton, but neither of those experiences prepared him to tango in front of millions of viewers.  “When you do anything that you have never done before it is a little nerve racking at the end of the day,” he revealed.  “But I think the bottom line of this show is to see growth happen and we are so excited to do that.”

Also high on the nerve-o-meter was Frankie Muniz.  His foxtrot with partner Witney Carson was flawless, despite his nervous system being in overdrive. “Honestly, I was a disaster as far as nerves all day,” he told me after his dance. “But I am so thankful that [Witney] is my partner because she put up with me asking a million questions and I almost didn't remember the song we were dancing to.”

The night had other memorable moments, notably the revelation of the flirty side of Shark Tank shark Barbara Corcoran, whose limited dance ability was far overshadowed by her exuberance at having Keo Motsepe for a partner.  (Corcoran is pictured below, center, with Bergeron, left, and Motsepe.)  One might have thought she was on The Bachelorette!  (Her Shark Tank co-star Robert Herjavec met his bride Kym Johnson while dancing on the show.)  Post-show, the usually composed dealmaker was attempting to seal a different kind of deal with her partner.  “I’m turned on, buddy,” she joked when I asked about her obvious excitement.  “It’s like God came down and chose me to be the luckiest girl on earth.  So I’m more than blessed.  Look at this guy!  Do I deserve a man this age?” 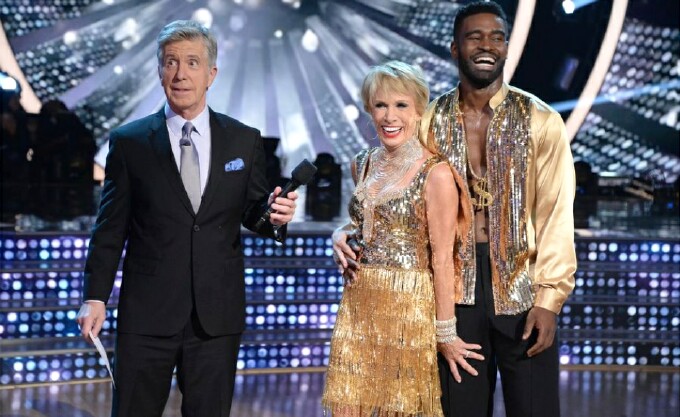 When quizzed about what Motsepe found sexy about his gushing partner, the pro-dancer diplomatically referred to her determination and work ethic. However, Corcoran was quick to interpret her partner’s praise.  “I will decode it for you, it’s like this,” she laughed.  “‘Honey, you’re rich and can I marry you just for a couple of years and be set for life?’  Just come out with it, you don’t have to beat around the bush.”

Most of the season’s competitors replied “everyone is my greatest competition” when I asked who they had their eye on.  Still, there was no denying the incredible story of Victoria Arlen.  The execution of her cha cha had everyone agreeing she is a force to be reckoned with this season.

“I thought that everyone had an amazing performance,” admitted WWE champ Nikki Bella.  “But Victoria … her story, and to go out there on live TV and do what she did and she [was] so amazing.  That is beyond inspiring.  She made me cry and she literally is the epitome of never giving up.”

Those words were echoed by Debbie Gibson, whose own shocking revelation of dealing with Lyme disease for the last four years surprised everyone. Despite her own health issues, Gibson’s praise of the brave Arlen was high.  “She blew my mind,” Gibson exclaimed.  “How could you even think you’re struggling with learning steps after watching that?  I almost felt I should hang up my hat and go home; in fact, my whole family is voting for her!  She was really amazing.”

Next week the DWTS competition continues with two nights of competition and two eliminations, Monday and Tuesday at 8 p.m. on ABC.