"DWTS": That Shocking Double Elimination Has Everyone Talking 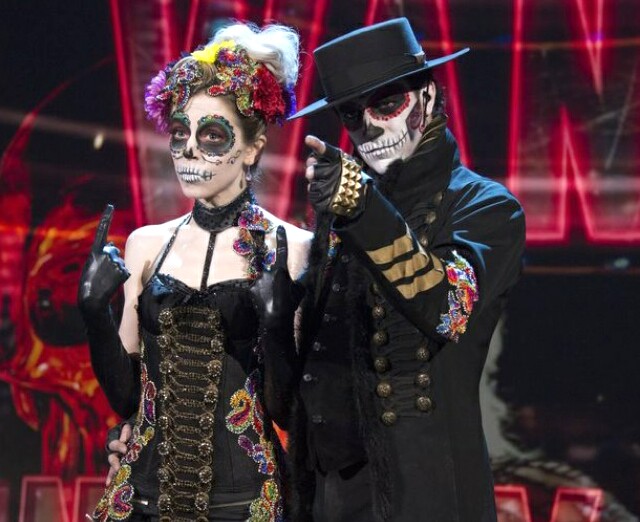 There was a giant trick amid many little treats Monday night on Dancing with the Stars’ Halloween-themed show, especially for Nikki Bella and Vanessa Lachey, who along with respective partners Artem Chigvintsev and Maks Chmerkovskiy exited the ABC dancing competition in a shocking double-elimination.  Bella and Chigvintsev received a score of 24 for their Jive, but the routine was met with mixed reviews from the judges. Lachey and Chmerkovskiy delivered an intense Paso Doblé and were also awarded a 24.  However, those respectable scores weren’t enough to keep either couple dancing for another week.  “Holy crap,” exclaimed pro dancer Lindsay Arnold of the double elimination.  “They like to spring that on us … and it’s a double!”

“I’m devastated,” echoed her celebrity partner, Jordan Fisher. “I was particularly close to Vanessa and Nikki. It get’s increasingly difficult to see people go, especially knowing how much hard work they put into this.”

“I’m not surprised,” admitted pro dancer Mark Ballas of the results. “I have been here too long for that. It had to come as there was that week when we were all saved, so it was definitely in the cards.”

Ballas and partner Lindsey Stirling (pictured at top) faced their own drama this week, with the possibility of Stirling having to forfeit the competition due to a severe rib injury. The couple did perform a Paso Doblé, but the pain was evident in Stirling’s face. “It’s not a break or a fracture -- those would have been devastating,” Ballas told me after the show. “It’s called a floating rib and the muscles between the ribs are really painful. It’s going to take a minute; we’re going to continue icing it and luckily Lindsey is in a state where she can continue as of now.”

“It’s hard seeing your friends go,” Terrell Owens mused. “I know personally the hard work that goes into this and to see someone eliminated … I hate seeing people go through it.” Owens and partner Cheryl Burke performed a Tango to the tune of a 25 score from the judges. “I’m becoming a dancer,” Owens said with a smile. “I think what happened is I gave myself permission to be a dancer.”

“That was genuine shock on our faces,” Val Chmerkovskiy said of the shocking moment. “That was some ruthless shit!” For Chmerkovskiy it was an extra-tough night because his brother Maks was a casualty of the results. “Someone has to go home,” he noted. “It’s sad, but bittersweet, bitter he had to go, yet sweet in that we are still here.”

Next Monday DWTS will make history when, for the first time ever, the remaining six couples will partner with a returning celebrity dancer from a previous season for a trio-dance. (Pictured below, left to right: Alfonso Ribeiro, Kelly Monaco and Corbin Bleu, three of the celebrity dancers who are set to return.) 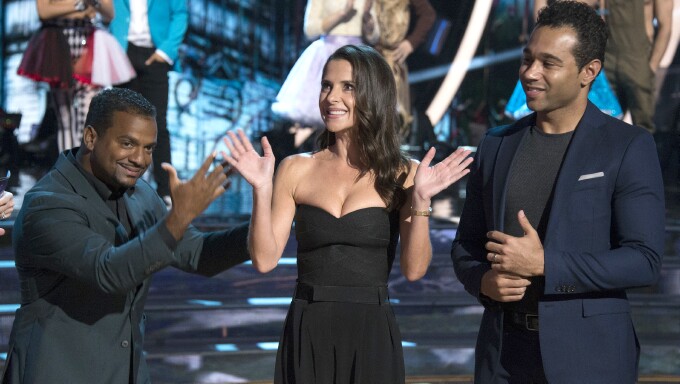 “This is something we have never done,” explained Lindsay Arnold, who along with partner Jordan Fisher will dance alongside Corbin Bleu. “The fact we get to have two celebrities in the room bringing different aspects of what makes them special and the reason they were on the show, as a choreographer I am so excited to see what I can do with them.”

“We have been friends for years,” added Fisher. “We’ve had very similar careers. Both of us worked on Broadway and with Disney, but we have never shared any kind of experience creatively so it‘ll be fun as friends to be able to do that.”

“I’m reuniting with one my champions!” Ballas beamed. “Kristi Yamaguchi is coming back so that’s exciting. Lindsey (Stirling) reminds me of Kristy, her whole vibe is reminiscent of her so it’s a perfect match. [Kristi] is one of the best partners I’ve ever had and I can’t wait to reunite with her.”

“One of my best friends, Kelly Monaco, who won the first season is back,” Cheryl Burke told me. “We are doing a rumba trio, which is a first in DWTS history. [Terrell Owens] can barely handle me, so two of us tigers …? I may lose a friend after Kelly sees me go crazy in the dance studio. Who knows?”

“I’m so excited about Alfonso [Ribeiro] returning,” beamed Lindsay Arnold (who won Season 19 with him). "Frankie already knows him, so they will get along and he’s a great guy so it's going to be fun.”

“We’ve been friends for years,” her partner Muniz confirmed. “We have the same work ethic but the only thing I’m afraid of is the fact he is really good and I’m going to have to keep up with him.”

Dancing with the Starsis telecast Monday night at 8 p.m. on ABC.