"DWTS" Exclusive: The Season is Taking Its Toll on Nick Viall 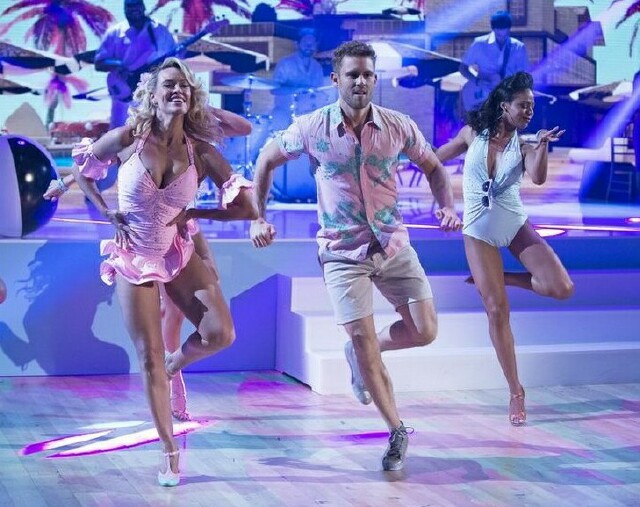 ABC’s Dancing with the Stars enters week seven of the competition tonight -- and it's proving to be a tough time for Bachelor Nick Viall. Like his competitor Bonner Bolton, Viall is feeling the pressure of the show, as was evident in last week’s video package prior to dancing a jive with partner Peta Murgatroyd. “I feel like I am getting worse,” he lamented during rehearsals. “It’s hard enough not to be self-conscious about being here, just being the reality TV reject.”

Despite Murgtroyd’s insistence that morale was “overall high,” Viall was depicted continuing to struggle with the routine. “It’s hard, I get it; I suck,” he admitted, adding, “I’m physically and mentally tired. Honestly, at this point I am trying to survive.”

Unfortunately for Viall, their Beach Boys inspired routine was met with mixed comments from the judges, all of whom concurred he needed to work on his finesse. The couple (pictured at top, and below with DWTS host Tom Bergeron) scored a 28/40 with Judge Len Goodman being exceptionally harsh.  “I wasn’t picking up a lot of good vibrations,” he said, which did nothing to boost Viall’s spirits.

“The packages are the packages,” Viall told me after last week’s dance. “I think this week everyone’s kind of hit that point in the competition. We had two dances this week and especially for us guys, we’re not dancers. It’s a lot for us to handle one dance, let alone two. 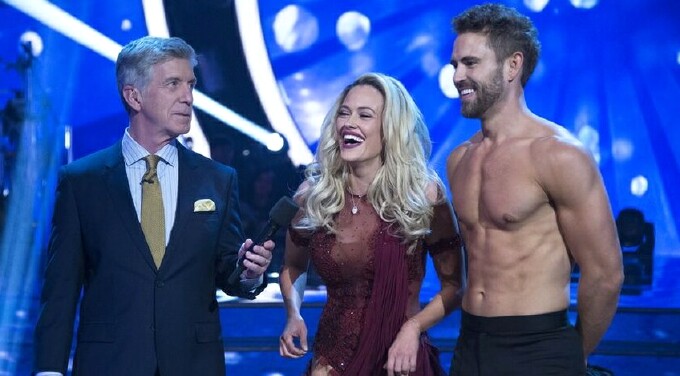 As for referring to himself as “a reality show reject,” Viall mused, “It’s all in good fun, but the truth is I understand why I’m here and I am kind of in awe of my peers sometimes.

“I wasn’t joking around when I said as a kid growing up I’d watched Nancy Kerrigan with my family winning a gold medal; being in awe of what Simone (Biles) does and having Rashad (Jennings) on my fantasy football team,” he continued. “I remember watching David (Ross) hit the World Series home run in bed in a hotel room, so to call them friends is weird to me because while it’s an honor to be The Bachelor, at the same time its cool being amongst them.”

The night was also particularly hard for Murgatroyd. She had to endure fiancé Maksim Chmerkovskiy and his partner Heather Morris’ elimination after receiving the season’s first perfect score. “I was flabbergasted,” she told me. “It’s really devastating. Max was so positive and really excited to be back dancing, so to go out like that hurts me just as much as it did him. I thought Max and Heather would stay.”

She did, however, find some humor in the situation when I asked if she could demand a recount. “No, you can’t,” she laughed. “You can’t do that; once you’re out, you’re out. I guess Max will have more time with [our son] Shai now.”

With their jive firmly in the rear-view mirror, Viall and Murgatroyd are setting their sights on a new dance under tonight’s movie night theme. They will be dancing an Argentine tango. As the Season 24 finale looms, Viall is also looking to future ventures. However, remaining in reality TV may not be Viall-able. “I think my time in reality TV is probably done,” he admitted. “But for right now I’m just focusing on dancing.”

There’s always that recording contract guest judge and Backstreet Boy Nick Carter offered him following his boy band-inspired group dance last week. “I may have to take him up on that,” Viall laughed. “But I can’t sing, unfortunately, and I'm still working on the dancing part.”

Viall’s journey continues tonight at 8 p.m. ET on ABC’s Dancing with the Stars.