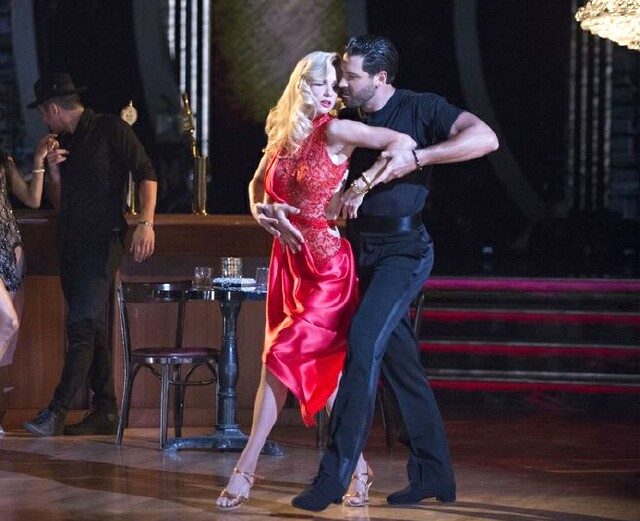 Not since the sudden ousting in Season 5 of Cheetah Girls star Sabrina Bryan (and partner Mark Ballas) has there been as shocking an elimination on ABC’s Dancing with the Stars.  Audible gasps filled the ballroom at the end of Monday night’s show when former Season 24 frontrunner Heather Morris and partner Maksim Chmerkovskiy (pictured at top and throughout) were given their marching orders following a perfect 40/40 score for their rumba. The dance also marked Chmerkovskiy’s return to the ballroom after being sidelined for three weeks due to an injury, and while their performance had the judges using words ranging from “elegant” to “stunning” the couple’s happiness was short-lived. My exclusive interviews with Heather and Maks follow.

“I’m okay with it,” Morris admitted to me after the show. “It’s bittersweet and we had a wonderful time [although] it was hard to balance going from Maks to [stand-in dancer] Alan [Bersten] and back to Maks, but tonight was awesome and we were really happy with the dance and happy that it came through so it all worked out.” 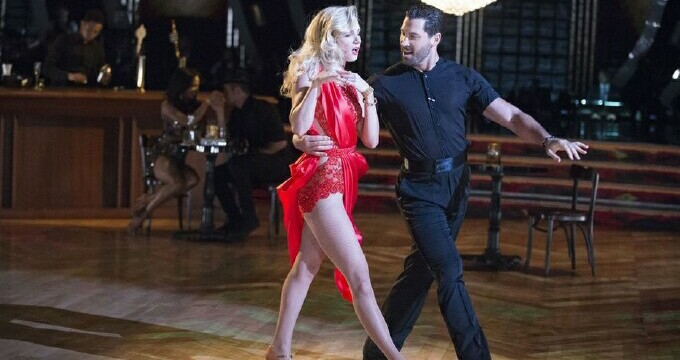 The similarities to the unforgettable Season 5 ousting of Bryan were not lost on Chmerkovskiy either. “I feel that same way I did when Sabrina Bryan got voted off,” he told me. “That was also not a deserving exit, or the way Brandi [Norwood] and I got eliminated from the [Season 11] finale.  That was kind of similar.

“This is so strange that it is kind of okay given the way the show is,” he added. “I just feel bad because there was an opportunity for Maks and Heather to develop and to build every single week and that got cut short. Alan did an amazing job. He definitely showed himself this season. I feel bad it took so long for me to get back [after my injury]. I did the best to get back but, you know … I am going to miss coming to work.”

Many observers thought Morris was a shoe-in to make it to the season finale. She’d previously been a back-up dancer for Beyoncé and proved her dance prowess week after week on Fox’s Glee. Still, she appreciates that viewers may have seen that as an unfair advantage. “Its heartwarming and its great that [fans in the ballroom] were behind me, maybe America is just not,” she sighed. “They weren't behind us that much, so you don’ t know what’s going on, but for our last time to be so great and to be together again was so great.” 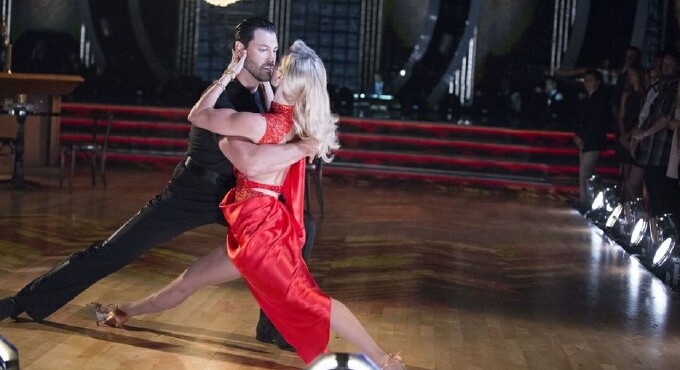 Elimination aside, Morris looks fondly at her time on the show, admitting the take-away was worth it. “I learned to do a kick-ass rumba,” she laughed.

Morris also discovered her dancer’s body is not quite what it used to be and the rigorous demands of DWTS only highlighted that. “I'm a little bit older so my body doesn't work as well,” she admitted. “That’s hard because you want to mentally keep up, but you know it's just different for your body. Your back starts to hurt and it's hard to juggle that.”

With her dance card punched for the foreseeable future, Morris is hoping another project she’s been working on will continue a DWTS connection. “I have been doing a lot of writing and wrote a dance film,” she revealed. “Hopefully I can finish that up and hopefully give it to Julianne Hough because she would be perfect for it.  We’ll see how that goes.”

Morris says now that the show is over for her she’s going to miss “the people” and Chmerkovskiy especially, whom she describes as “hysterical in all aspects.” However, there is a plus side for both her and her partner -- their kids. “The time spent away from my kids, that was really hard because I love them so much,” she said. “Maks now has more time with his baby, too.”

“Yes I will because mommy has to go to work,” joked Chmerkovskiy. [Maks and fiancée Peta Murgatroyd, also a dancer on the show, have an infant son, Shai. Peta is currently dancing with Nick Viall of The Bachelor.]  “There is now no holding him for her and me just standing there. I have a lot to look forward to.

“But you know what? It's Season 24 and I hope everyone enjoys the rest of the show and has an amazing time!” he concluded.

Dancing with the Starscontinues Monday at 8 p.m. ET on ABC.