Earth Day Special: "2040," on The CW, Takes Viewers to a Utopian Future

By Steve Gidlow April 21, 2021 Behind the Scenes in Hollywood Archives 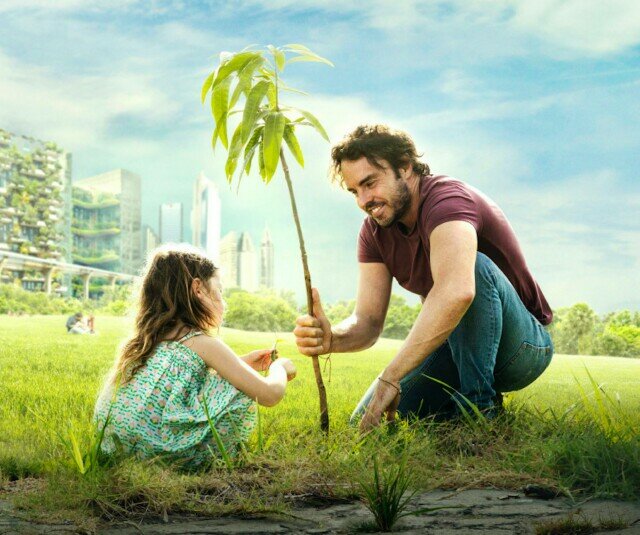 Australian filmmaker Damon Gameau has high hopes for the future of the planet. He eloquently reveals them in his award-winning 2019 environmental documentary 2040, which tonight receives its U.S. network premiere on The CW in celebration of Earth Day 2020. Told through the lens of a love letter to his then four-year-old daughter Velvet, Gameau explores the impact of climate change on our environment and the detrimental domino effects to ecosystems globally. Instead of highlighting a dystopian future, through his innovative storytelling Gameau paints the picture of a utopian 2040. His only rule - - everything used to create that future space must currently exist. It's something he calls "fact-based dreaming" and is delivered perfectly by the film's riveting visuals.

"I spend a lot of my time watching documentaries," he said during an exclusive interview with MediaVillage. "But sometimes they can fall into a category that can be a bit earnest and reverential. I don't think necessarily that's how they have to be. There's lots of evidence to show that we absorb more information if it's delivered in a fun, accessible, or creative way. I guess it opens up parts of our brain [and] hopefully allows that information to be stored and embeds it deeper."

Gameau did just that with his last documentary That Sugar Film (2015), an expose on the "healthy" sugar additives used in food, in which he became his own guinea pig. He learned a lot about sugar during production (and said he has the "liver scars" to prove it).

"These subjects need to be shared very broadly," he said, noting that many documentaries only play to "a very distinct and limited crowd. I got that experience with Sugar, seeing how many people, especially in Australia, don't really watch [documentaries]. I thought there's terrific power in this -- if you can use different devices and bring more people in. Make them fun, nice to watch, visually exciting and arresting.

"In 2040 those visuals were key and had to be done right," he continued. "If you try to pose it as a better future and it looks hokey and cheap, no one is going to connect with it. So, we spent a lot of time making sure the visuals were bold and accurate. There was a lot of discussion with the creative team and special effects people about which side of the road a driverless car pulls over on; or what kind of trees would grow on this rooftop in this particular city. Some were my visions, but were also based on some terrific conversations, drawings and sketches. It was a very fun project to do."

Throughout the film, Gameau introduces viewers to a handful of innovators and changemakers in the fields of economics, technology, civil society, agriculture, education and sustainability. "I spent a year with a researcher," he shared. "I spoke to probably 100 different academics, scientists and futurists to get a handle on how bad things were and understand not only the intricacies of climate science, but the systemic flaws and all the things that are causing them.

"Then [we] tried to find some of the legitimate scalable solutions that existed," he added. "We had a huge whiteboard with all the solutions written out; then we started to whittle them down so that they weren't just about emissions. They had a raft of other cascading benefits for our health and society, from community building to income inequality. I met some incredible people along the way."

In addition to the academics interviewed, Gameau spent hours interviewing the children of today – the group that will be most affected by tomorrow and the people he hopes to inspire to work toward the re-generation of 2040. All came with great ideas. "I would say what probably gives me the most hope for the future is not just the kids in the film, but the ones we've seen in schools, and just how insightful and eloquent they are on this topic," he explained. "They’re really switched on to stuff. There's a pain to that in the sense that they are acutely aware of how dire things are.

"[They have an] innocence and an openness to new ideas," Gameau continued. "We need to nurture that, because a lot of them want to do something to make a difference to the world. But they're not being shown the engineering projects they could be involved with, or they could come up with. We have to give them the food for that creativity. The great win with the film is these astonishing kids send us stuff every week saying, 'please add seaweed,' or are building (solar) microgrids. Their creativity is being stimulated, so let's not just teach them how bad things are. Let's get them excited about ways that could change the world so they can get involved."

Since making 2040, Gameau has undergone a personal environmental awakening. He's cultivating healthy soil at home to grow vegetables. He now drives a second-hand electric car, run by solar panels, and has purchased electric gardening tools to reduce emissions. They're all changes he describes as "subtle," but the biggest take-away is being able to educate his oldest daughter, who inspired the project, along with the other daughter he has welcomed since completing the film.

"Most importantly with our daughters now is that we teach them to value nature," he shared in closing. "I think that's what every parent can do to make the biggest change. Introduce them to the magic of nature; explain how trees talk to each other under the ground. If we can embed that into this generation, they will fight for nature and want to protect it because it will have value and meaning. Our biggest change is really getting our daughters excited about the living world. Gosh, if every parent and every teacher did that, we'd have a very different world by 2040 or 2050."