Eddie Cahill of ABC's "Conviction" -- Forever a Friend of “Friends” 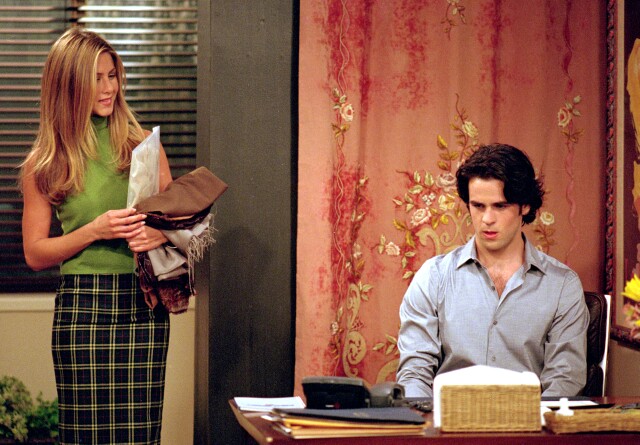 (Editor's note:  This column was originally published on October 14, 2016.)  As D.A. Connor Wallace on the new ABC drama Conviction, actor Eddie Cahill has his hands full, quite often with co-star Haley Atwell (formerly of Marvel's Agent Carter). Seems romancing beautiful women on screen is a long-running theme of Cahill’s career; in 2000 at the ripe young age of 22 landed the role of a lifetime on Friends  and would soon find himself locking lips with Jennifer Aniston's Rachel.

Cahill’s character, Tag Jones -- Rachel’s naïve/hunky assistant at Ralph Lauren -- helped introduce the word Tag to the vernacular long before it became synonymous with social media. While Tag’s employment credentials were dubious, his boyish charm (and ability to paint a house) would see him win the assistant position (over the more qualified Hilda) and soon move from behind his work desk to front and center of Rachel’s dating life. Although Cahill’s arc on Friends lasted just seven episodes, the actor admits it’s a role he can’t escape --  and that’s just fine with him.

“I couldn't give you a number but it comes up quite a bit and came up recently,” he recently told me. “The reach of that show is remarkable to me and it gives me hope because it was 16 years ago. I was 22 years old. Every time someone says, “You we're on Friends,” I think, ‘I’ve still got it!’” (The show’s resurgence on Netflix likely has a lot to do with this, not to mention its continued popularity in syndication.)

Cahill still gets goose bumps talking about his audition for the role, one he describes as “nerve-racking.”  He says audiences almost saw a very different actor in the part. “The final audition was on a Tuesday and down to myself and Tom Welling (Clark Kent on Smallville),” he recalled. “They bought us to set and whoever got the role was going to go to right to rehearsals. I remember walking into a room with Marta Kaufman, David Crane, Kevin Bright and Jennifer Aniston and they could see I was terrified.”

According to Cahill both actors read for the part and somehow through his “white knuckling” he landed the role. “Tom very graciously shook my hand and wished me well,” he smiles. “[Then] I asked for a telephone so I could call my mom.  It was pre-cell phones!”

Not bad for a first audition by an actor who had just landed in LA and used his last $230 to buy a plane ticket to get there. “I was supposed to go back to New York that day,” Cahill laughed. “We finish rehearsals and I was outside of Stage 24 and Courteney Cox looked at me. I must've looked lost. She said, ‘Do you need a ride home?’ I was way too scared to say, ‘Yes.’”

Cahill was quick to add his thanks to Jennifer Anniston, whose generosity as an actor made his Friends experience so joyous. “She really let me have a voice on the set,” he recalled. “There was one moment I remember in particular; we were trying to work on a joke in rehearsal and I kind of leaned in with an idea and she said, ‘Hey, Eddie has an idea and it's a pretty good one. Let's try it.’ She allowed me to have a voice, which was very cool.” 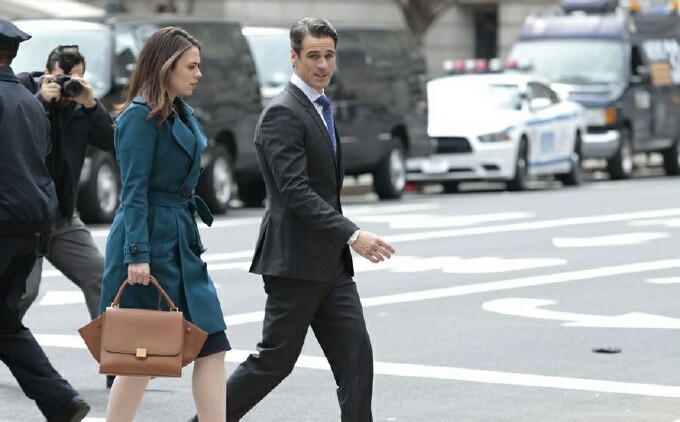 Today Cahill (pictured above in Conviction with co-star Hayley Atewll) has much to thank Friends for, including longstanding friendship with co-star David Schwimmer and endless re-runs of the episodes he is featured in. Unlike a lot of actors who don’t watch themselves, Cahill is not afraid of the TV way-back machine and will watch an episode if he happens upon it. “I was very hard on myself back then because I was young and new,” he said. “Now I'm sort of soft about it. I can see it and see my youth and kind of see my sweet younger self. I look at him now and instead of being hard on him and saying, ‘You didn't do it well enough,’ now I think, ‘Well done, kid.’

“I feel fortunate because I got to be a part of something so important in television and they received me very well,” he added. “It was a really nice beginning, a nice introduction and as scared as I was and as much as I felt like a three-headed dragon, there was so much support and that encouraged me to say, ‘keep going, you belong.’”

When it comes to the question of “Where would Tag be today?” Cahill has his own ideas.  However, running Ralph Lauren was probably not in the cards. “I wonder if he didn't run back to Ohio,” Cahill mused. “I don't know where [Tag] was in the moxie department.”

Read Steve's interviews with other Friends of "Friends," including Leah Remini and Anna Faris.