Elizabeth Perkins Proves 60 Is Sensational in Fox's "The Moodys" 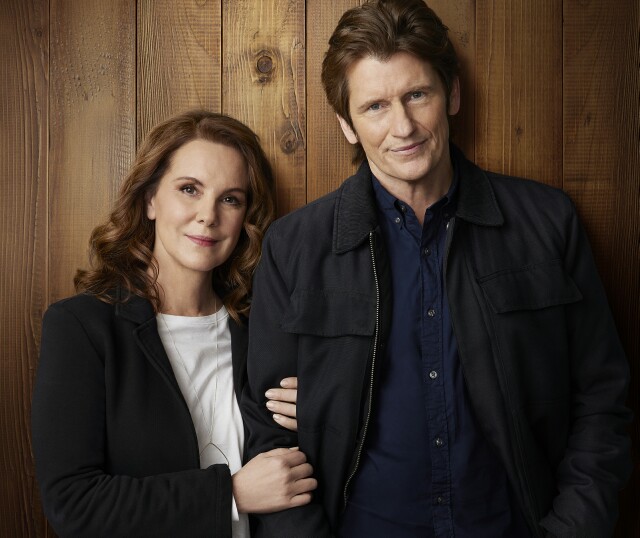 Elizabeth Perkins' latest character, Ann Moody, is a woman who has lived and still has plenty of living to do. Perkins and Ann are each proudly 60, vibrant, happily married, and ready for the next chapter.

In the sitcom The Moodys, which returns to Fox for its second season on Thursday, April 1, Ann is married for 34 years to Sean, played by Denis Leary (pictured at top with Perkins). Their three adult children were launched -- sort of -- and yet as the new season opens, everyone is camped at their Chicago home.

"We decided to do the show post-pandemic," Perkins tells MediaVillage. "We just needed a reprieve. Sean's been on house arrest, and it's a little bit of a metaphor for how we all feel … can I step outside? I think everybody is over the nihilism and the depression and just wants to get outside and have some joy."

Perkins refers to the series' oldest son, Sean Jr., played by Jay Baruchel. He was under house arrest for accidentally torching a church and is less than thrilled about the prospect of working in his father's HVAC business. Middle child Bridget (Chelsea Frei) is a recently divorced lawyer. Dan (François Arnaud), the youngest, wants to be a photographer.

The comedy perfectly captures the vibe of a couple ready to throttle one another, but their decades of loving each other stanchthose homicidal tendencies. An exchange in Thursday's episode might make some wonder if they were surreptitiously recorded.

Ann: So, you have no idea why I am upset?
Sean: Because I spent a bunch of money without asking you about it?
Ann: Really, that's what you think?
Sean: Well, can we just get to the part where you give me the answer?
Ann: Do you have any respect for what I am trying to do with my life?

Perkins laughs recalling the scene and shares that she loves how realistic the fictional family is.

"Ann has a lot of me in her," Perkins explained. "There is a lot of desire to do something else now that I am an empty nester. And now that I am doing this career for 35 years, what else is out there?"

Ann's been a stay-at-home mom, unlike the actress. Perkins has worked steadily since she began and garnered Emmy, SAG and other award nominations over a career that has included Sharp Objects, Weeds and Big.

Perkins loves that Ann is a fully realized character with a new career as a therapist. The actress draws much of the character from her mom.

"When my mom turned my age, she moved to North Carolina, and became a drug and alcohol rehab counselor and decided to do something completely different with her life," Perkins said. "Ann has gotten her degree in psychology and did a two-year master's program and is now a therapist."

Though they first met on set, Leary, 63, and Perkins grew up about 40 miles from each other in New England; she in Vermont, he in Massachusetts. He has two grown kids, and Perkins has four adult children.

"Denis and I were raised in the '70s, and we went to Springsteen concerts and smoked weed and did bong hits in the garage," Perkins recalled. "Sean and Ann have those memories. There is a certain swagger to that, and a certain quality in their relationship. They were very sexually active and probably had sex in the back of an Impala.

"We wanted to keep that attraction because that's the real thing," she continued. "I adore my husband. It was something we actively wanted to put in the show. Just because you are 60 doesn't mean you are not sexually active. It was important to Denis and me that these people still go at it."

During the pandemic, the actors' once-empty nests became crowded again. Perkins acknowledged how deeply she missed her kids, but once they were home, she couldn't help but grow annoyed by dirty dishes in the sink, wet towels on the floor, and the TV constantly blaring. As soon as they left, she missed them.

While Perkins believes 60 is hardly elderly, the number can bring an urgency to live, a necessary push to make sure you do something more than another load of laundry and run yet another errand.

"When you get to a certain age, it's 'Hey, I never went to Italy. I never took that art class I always wanted to do. I didn't spend enough time with my girlfriends,'" Perkins said. "For Ann, it was, 'I really want to go back to school.' Whether or not she is any good at it, the point is she did it. She took that extra step for herself, and it doesn't have anything to do with anyone in the family. For a lot of stay-at-home mothers, it's a great step and really inspired by my mother."