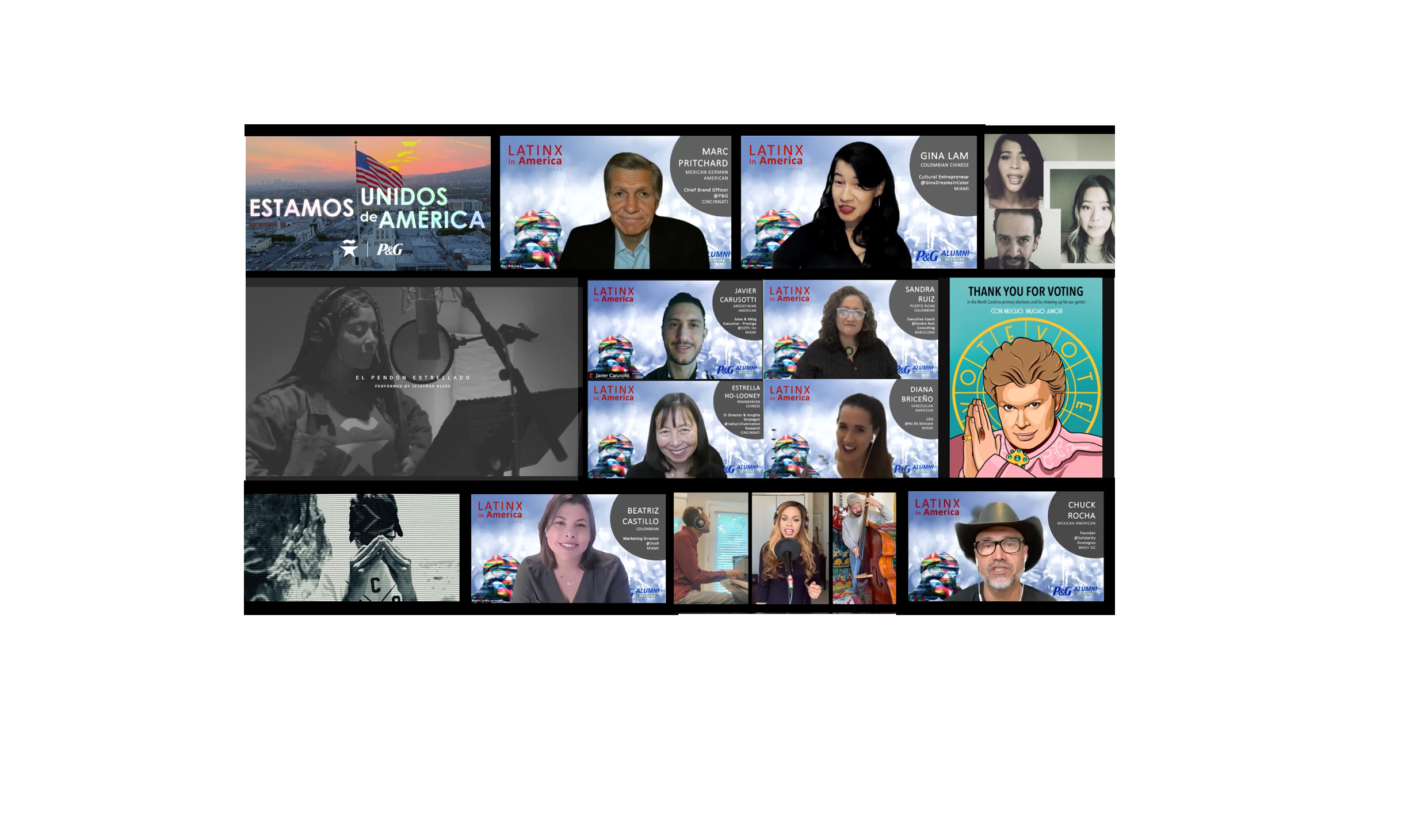 The Spanish and Portuguese changed the landscape and forever erased the trajectory of a rich pre-Colombian civilization, with millions from the Native American population suffering and dying from conflict, enslavement and Western diseases. Much of the indigenous musical, language and other cultural traditions in the Caribbean and on the mainland were lost after the Europeans arrived.

Fast forward six hundred years, and we are still grappling with the painful aftermath of this tragic history that touches the lives of so many Latinx people in the U.S.

During National Hispanic Heritage Month last fall, the P&G Alumni Network, a 45,000-strong global community of former P&G employees, gathered together to participate in the Latinx in America, Presente y #SinPena virtual event. It showcased leading change-makers, artists and corporate leaders committed to removing labels and celebrating the momentum of the Latinidad experience.

The event was conceived and launched by Gina Lam, founder and strategist of GinaDreamsInColor, a former New Yorker and P&G luxury marketing executive who has curated artistic beauty residences with fashion houses like Gucci, Dolce & Gabbana, Hugo Boss and Burberry at global venues in Cartagena, Buenos Aires, Lima, Bariloche, São Paulo and Miami. Lam, who is of Chinese-Colombian heritage, brought her sharp eye for artistic expression and social impact to the Latinx in America event, along with the support of alumni chapters across North America, Latin America, Asia and Europe.

Lam opened the evening with a heartfelt and passionate call to action, in many ways reminiscent of John Leguizamo's personal, one-man play, depicting the influence of Latin America and the Caribbean on the formation of the United States and its subsequent centuries of history. She highlighted the Latinx population at 60 million and growing, representing nearly 20% of the U.S. population and a whopping $2 trillion in economic power by 2023. Lam asserted "Our cultural, economic and political impact was undeniable in 2020 … and in the 2020 election," Lam asserted.

Unfortunately, the potential of Latinx influence is severely impeded by the harsh realities of economic inequality and racial discrimination, as reflected by the disproportionate impact of COVID on the community with Latinx patients dying three times more often than other groups. Also, one in four essential workers, including medical assistants, childcare workers and telecommunication installers, are more likely to be Latinx and on the frontlines of this pandemic.

In addition to the unfolding COVID tragedy, the Latinx community is also suffering financially with a 20% unemployment rate (higher than any other racial or ethnic group) and up to a 25% chance of a Latinx-owned business permanently closing its doors.

This harsh reality impacts lives, and for keynote speaker Marc Pritchard, chief brand officer of P&G, this provided a powerful impetus to take action as he explained "equality and inclusion is one of P&G's Citizenship priorities … we are focused on achieving an equal world that embraces individuality and the unique contributions of all people." Pritchard emphasized that multicultural competency and focus on diverse needs of audiences is not a superficial slogan at P&G. He said it is "built in, not bolted on to how we operate."

Pritchard emphasized that the company is committed "to be the best company for Latinx employees, and we want to provide the best brands for Latinx consumers," with 17 out of its top 22 brands holding a No. 1 or No. 2 share position with this growing customer segment. He also shared the accelerator impact of equality that stems from "equal representation in the U.S., which leads to greater creativity and innovation, builds access to opportunity and leads to equity in income and wealth creation that leads to purchasing power which leads to market growth -- which is important to P&G's strategy."

P&G is targeting to have 18% of its employees come from a Latinx background, and he admits there is still a long way to go.

These statistics are personal for Pritchard. His father was Mexican, adopted by a man named Pritchard, benefiting Marc with a white identity that created opportunities not impacted by the stain of discrimination.

His father was an activist among migrant Mexican farm workers in Colorado. This had a profound influence on the young Pritchard, as he saw firsthand how migrant farmer workers were treated. Pritchard recalled being told early in his career to not spend too much time in the sun for fear of getting a "dark tan," and as a result of these insidious remarks, "I suppressed my Mexican heritage, for fear of being labeled, because I had heard these denigrating terms used many times in my life," he said.

These personal experiences helped shape his commitment to equality and today he is one of the biggest crusaders for change in our industry, with initiatives like the ANA's AIMM's #SeeAll (Alliance for Inclusive & Multicultural Marketing) and measurements like GEM (Gender Equality Measure) and CIIM (Cultural Insights Impact Measure).

Pritchard also serves as the chairman of the ANA and its Growth Council, and he has led conversations with other leading CMOs to create a Growth Agenda that would "help brands step up both as a force for good and a force for growth." Pritchard is an exemplary choice to lead these initiatives at the ANA, as P&G has seen sales grow in each of its business units, while at the same time the company has taken action on racial injustice through The Talk, The Look, The Choice and other grassroot campaigns.

Advertising is a powerful communication medium and impacts perceptions of how people see each other and see themselves. Studies show that an accurate portrayal leads up to a 10% increase in trust ratings and 25% increase in purchase intent. This is profoundly meaningful. "As one of the world's largest advertisers, we strive to accurately portray all people across gender, race, ethnicity, sexual orientation and gender identity, ability, religion and age, and that includes Latinx people," Pritchard emphcized.

After Pritchard's keynote address, the event focused on portraying the textured mosaic of the Latinx experience with some leading voices in the community reflecting on their life journey living across cultures (moderated by Sandra Ruiz) -- from microaggressions to labels, from "whitening" names to cultural suppression, and from pride in heritage to heartfelt micro-affirmations.

We heard poignant remarks from Diana Briceño, CEO of No B.S. Skincare, who reminded us that "Latinos can be essential workers, nannies and CEOs." Lauren Henderson, Panamanian-American Latin Jazz musical artist, emphasized how she is constantly being judged by her appearance, explaining that "discovering my Latinidad centered around colorism. Never being considered Black enough … people question if I can sing Black enough … never feeling Latinx enough to fit into the community ... por que hablas español?" These prejudiced attitudes are what drives almost 76% of Latinx people to hide their true identities and pretend to be someone else. Beatriz Castillo, marketing director at Shell, asserted that these microaggressions need to be transformed to micro-affirmations."Latinx means to have a telenovela name and to carry our history in our names with pride," she declared.

We also watched Urbano Latino recording artist JPatron chase his young immigrant aspiration of the American dream across the Coachella Valley while Insight Strategist Estrella Ho-Looney shared research that most Latinx immigrants feel that they continually straddle “one foot in LA and one foot in the US.” Finally, Argentinian American Javier Carusotti reminded us to quell the divisiveness within the community that not surprisingly emerges among 25 countries of origin.

The 2020 Presidential race unveiled one of the biggest misconceptions that was voiced more loudly over the election season - the erroneous view that the Latinx group represents one homogeneous community. As Chuck Rocha, Founder & Presidential Campaign Strategist, from Solidarity Strategies explained, “much like the rest of the US it varies by gender, by age and from state to state, as well as where each group has ancestral roots or migrated from and why. A single message does not necessarily work for the collective whole.” Rocha continues to emphasize "one campaign after another gets this part wrong: they don’t talk to our community early enough, often enough and with cultural competency.” This learning can be applied across any campaign trying to reach and engage Latinx hearts and minds - in advertising, in politics, in the workplace, at the grocery aisle and in popular culture.

The rich tapestry of this event centered around the vibrant diversity that is intrinsic to the Latinx community across race, culture and origin stories, with one-third of the community identifying as bicultural including Asian-Latinx and one-fourth identifying as Afro-Latinx.

As we think about the P&G Alumni Network mission, this special event and the lively "after-party" reflected how the alumni community is creating impact using the power of engagement, enrichment and philanthropy for social impact and racial equity. The ongoing, tireless work of the P&G Alumni Foundation, reflects this commitment and has provided grants of $1.3M to empower marginalized communities and provide access to economic opportunities.

In the words of our illustrious event creator and leader, Gina Lam, who shared this important message before the final curtain call: "Step up and step in … to vote … to hire and to wire, to create and to spend with the community, to be informed and influential in meeting the moment … where we all go from surviving to belonging to thriving … where a foreign accent is a sign of bravery."

And above all, she implored us to "Go forward and be presente y #sinpena!"

This event was made possible by generous support from SYNFINY and AARP. The event was led by the South Florida alumni chapter and co-promoted with the Southern California, Baltimore, Boston, NYC, Chicago and Dallas Fort Worth chapters.

Missed it? Watch the event

Visit the P&G Alumni Network to raise your voice and join our mission.