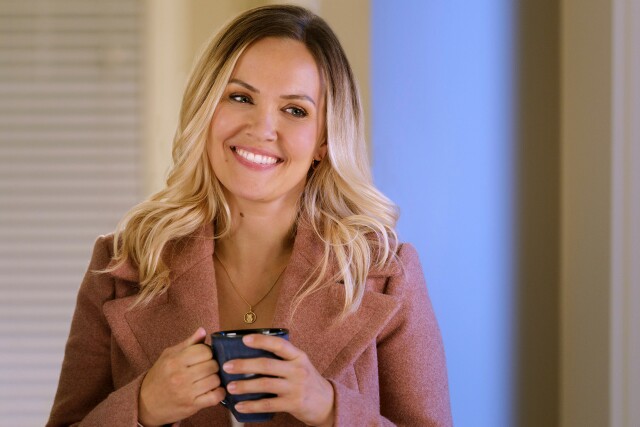 For her latest Hallmark Channel project Don’t Forget I Love You (lucky number 13 if you're counting), Emilie Ullerup found herself dealing with some real challenges. As Taylor, a successful professional organizer about to celebrate her 30th birthday, she finds her regimented and meticulously organized life disrupted after her dad presents her a map leading to a time capsule left to her by her deceased mother. Inside are six envelopes with instructions to be opened over the next six weeks, each containing a challenge designed by mom to help conquer anxieties she foresaw as being obstacles in Taylor's life, and in turn, broaden her outlook. "I always like to tell stories where people come through something that's really hard," Ullerup (pictured above) explained in an exclusive chat with MediaVillage. "I think it's important for people to see that on TV, as it's happening all the time, and sometimes you can't see your way out of whatever darkness you're going through.

"I believe we are all pretty resilient and with time everything heals," she continued. "I liked that about this story, and even though Taylor has lost a parent, it's a nice commemoration of that. I thought it was a lovely, lovely tale of a woman also learning to let go a little of the fears and the control issues she's obviously put in place to protect herself [and] learning that maybe they're not serving her anymore."

As Taylor is about to embark on the challenges posed, she meets Josh (Clayton James, pictured below), her extremely disorganized new neighbor, and his daughter Chloe (Daphne Hoskins). Unsure if she can accomplish some of them, she enlists Josh as an accomplice and a new friendship starts to form. However, being so centered, Taylor can barely see the totality of the life surrounding her, and anything more than a friendship doesn’t factor in. 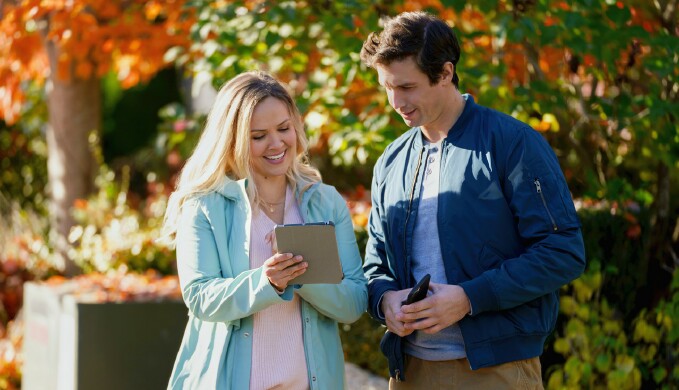 For Ullerup, the tricky thing about playing Taylor was finding a balance that made her likable. "Taylor was very much on the page in the writing," she explained. "But what I took differently than maybe what was on the page was that she also needed to be a little quirky. I didn't want her to become unlikable, and that's easy to do with somebody that's so regimented. I thought it was important that she tumbles a lot and doesn't really know how to be social or maybe say the right things. That was definitely something we brought to life as we were shooting because I felt if I played her [as too in-control], who is going to want to hang out with this woman?

"It's my big thing," she added. "I always give movies not very long, and if I don't like the character then I'm out. I can't! Even though it might turn around later, if I don't like them within the first five minutes, what's the point?"

Ullerup admitted she personally didn't share too many traits with Taylor. "I mean she was daily, daily, daily, down to like how much orange juice she presses every morning," she laughed. "And then throw a child into the mix and forget about all the organization and how you so proudly labeled everything, and everything is in its place. I'm not exactly like Taylor, that's for sure. I think if you ask my husband, he might say I've got some control stuff. I'll deny it till the day I die, but I definitely like things a certain way. I also think that as an actor you have so little control of your career, especially in the beginning, that you find ways to control other things."

While filming, there were a few things Ullerup couldn't control -- like the challenges Taylor had to perform. "Ok, so there's a scene on a bridge," she recalled. "It's in Vancouver and so beautiful there. I've been on that bridge before and [easily] wandered out and wandered back. But the day of filming, there was nobody else there and I had to be incredibly frightened, like I was hyperventilating. All of a sudden I grabbed Clayton and was like, 'Clayton, I might pass out! I am terrified!' It happened suddenly and it was awful. Don't start hyperventilating on a bridge that's already swaying. I don't recommend it.

"In another challenge, Taylor does goat yoga," she continued. "I've always wanted to do it, and it was so much fun. Although, it was weird and not the relaxing yoga experience you usually have doing a yoga class. You hope the goats will jump all over your back, and they were so cute! It just brightens your spirit. I loved it and highly recommend it."

Ullerup is hopeful audiences will take something away from all the challenges Taylor tackles. "I think both the first challenge and last challenge were the biggest," she shared. "By the time she gets to the last challenge she's grown so much. The first challenge is hard because it doesn't serve to protect her. The last one is Earth-shatteringly terrifying and requires a huge leap of faith."

As for accepting a time capsule challenge in real life, Ullerup is all in. "I would do it all the way 1000%," she laughed in closing. "I love games. I'm very competitive. You can't tell me I'm not gonna win. So even though it might not be about winning, I'd win that time capsule challenge!"

Don't Forget I Love You will be telecast Saturday, January 22 at 8 p.m. on Hallmark Channel as part of its annual New Year New Movies programming event.