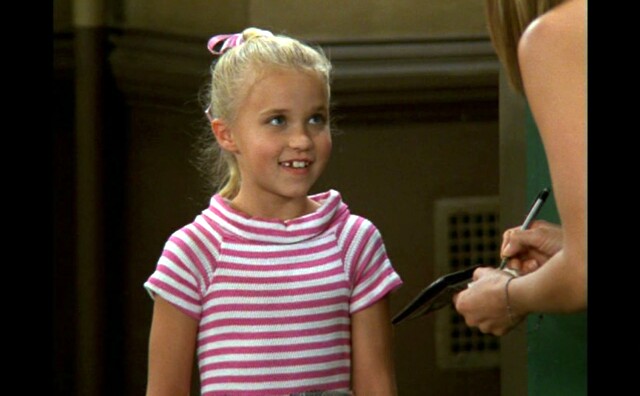 Actor and singer/songwriter Emily Osment may be best known for her five seasons as Lilly Truscott, the BFF of Miley Cyrus' character(s) on Disney Channel’s Hannah Montana.  However, before landing that high-profile role, Osment was already making her mark in Hollywood by appearing in movies and episodic television.  It was fall 2001 when a very young Osment stepped onto Stage 25 on the Warner Bros lot, taking on the role of Lelani Mayolanofavich in The One with the Halloween Party, the sixth episode of Friends’ eighth season, in which Monica and Chandler host a Halloween party.  The episode is probably best remembered for giving the world Spudnik (Ross’ disastrous costume that consisted of satellite antenna and a potato), while Chandler stewed over having to parade about in a pink bunny suit – thanks to Monica.  Also in the episode, Rachel starts handing out cash (and eventually checks) after running out of candy for trick or treaters.  Enter Osment, as one of those lucky trick or treaters. 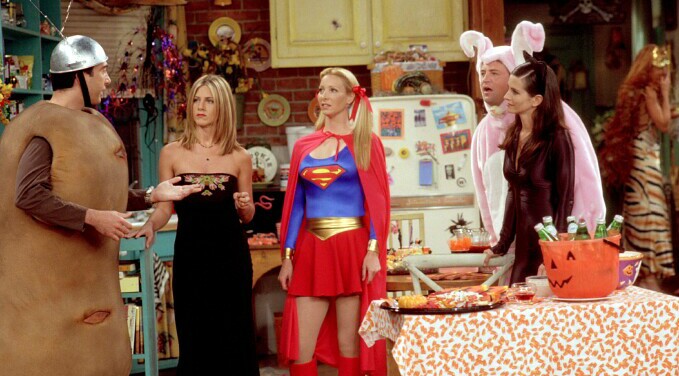 “That was an interesting episode,” Osment recalled in an exclusive interview with MediaVillage.  “It was the first episode back after 9/11, like the week after, and security was so high.  I was maybe seven or eight and remember not really knowing what was going on, obviously, and I couldn't even have my dad on set as they didn't want anyone who wasn't working to be there.

“I remember the schoolteacher looking after me,” she continued.  “They really didn't want anyone they didn't know there as everyone were terrified.  No one really knew what was going on after the attack and they thought we may get hit.  We had no idea.”

In fact, eighteen years after the episode's taping, Osment admits those events have had a lasting effect.  "It is a terrifying thing to look back on and remember," she shared.  "This iconic episode with Spudnik and Sean Penn (pictured below) who was a guest-star and on set, and while it's a great episode, no one knows it was shot the week after 9/11 and everyone was so sad." 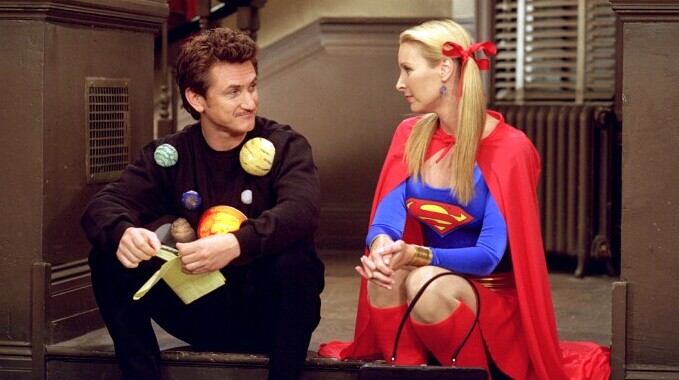 Despite the unpleasant circumstances surrounding the filming of her Friends episode, Osment does have some pleasant memories of becoming a friend of Friends.  "Jennifer (Aniston) was so pretty," she recalled.  "Everyone was so nice, and she was incredibly nice and polite.   I even got to keep my costume, as it was the Halloween episode.  A week later, I flew off to shoot Spy Kids 2 and took it with me.  I do remember wearing it at Robert Rodriguez's house for his Halloween party."

Osment revealed she wasn’t a big watcher of Friends when she made her appearance, though not through any fault of her own.  "I wasn't familiar with it as I was just a kid," she said.  "But I remember my parents watching it and they'd turn it off and tell me, 'go back to bed’ because it was too grown-up.'  I'd tell them, ‘It's NBC!’"

These days Osment has made up for that, admitting to being a big fan of the show and enjoying the reaction by her friends to her appearance.  "I've seen it now, of course,” she laughed.  “I'll be with my friends and after all these years they'll go, 'Wait a minute ...'  and then put it together after knowing me for a long time.

"Or I might have a boyfriend who is all, ‘that's you?’" she added.  "It's my favorite reveal ever!  It's not, 'You were in that Disney show?’  It’s ‘You were in that episode of Friends?'  It's like the greatest Easter egg ever.

In addition to advancing her singing career, Osment recently became a friend to Hallmark Chanel, starring in 2018's Christmas Wonderland, a role that followed her memorable arc as the unfortunate drug addict Jodi Hubbard on CBS' Mom.  She starred in season one of Netflix's critically acclaimed The Kominsky Method and has a plum new role opposite Brittney Snow in the Fox drama Almost Family, premiering October 2.

She's delighted to have Friends forever on her resume. "It's a fond memory," she smiled.