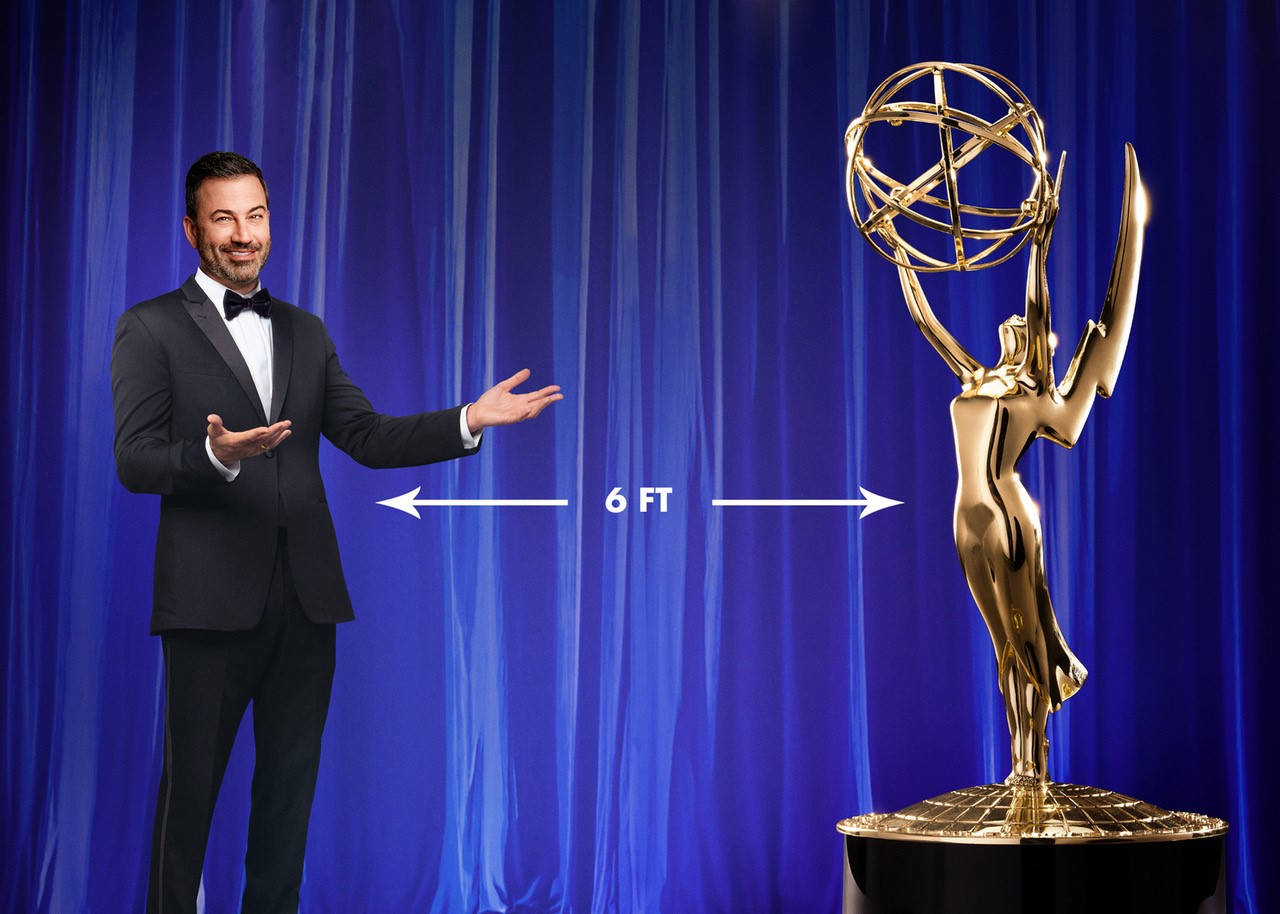 Televisions biggest night, the Emmy Awards (hosted by Jimmy Kimmel, pictured at top), airs this Sunday on ABC amid current COVID-19 restrictions. Like all of us, the producers of the annual awards show have had to reevaluate how they do things. But unlike a one-screen Zoom meeting with a few participants, imagine a 125-world-wide location, hundreds of cameras Zoom meeting fed to one location, and you get the gist. Needless to say, it's a massive undertaking. Are the producers nervous about it all coming together? You betcha!

"What could possibly go wrong?" laughed Ian Stewart (below right), one of the show's executive producers via a Zoom conference call. "It's sort of like walking a tightrope. You know you're not supposed to look down because if you [do], you fall off. But you do glance down, and there's no safety net. Things are going to go wrong. It's never been done before and things aren't going to work perfectly. That's part of the endearment of all of it and what we are going to try. We are going to try our best. 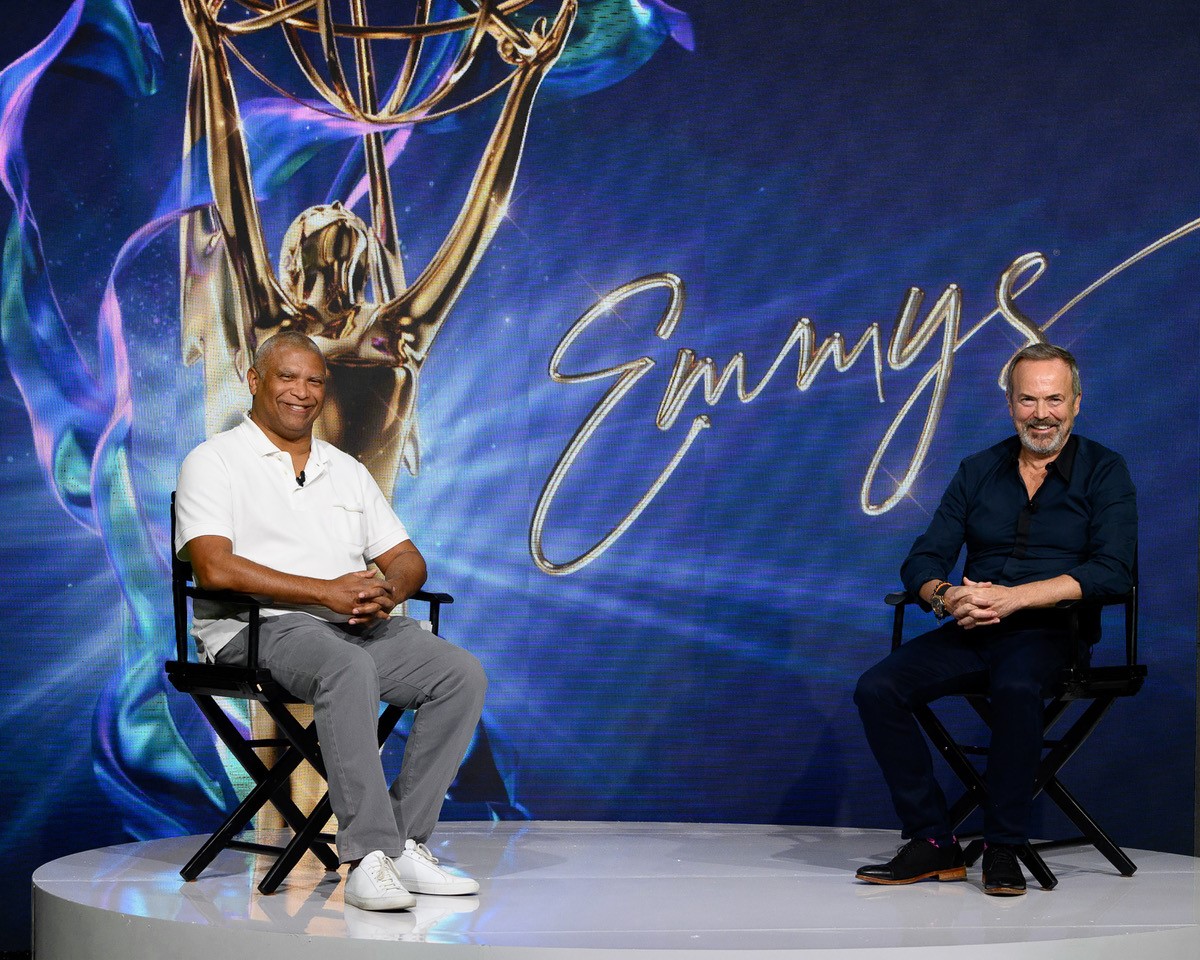 "The good thing is that we've got Jimmy Kimmel," he continued. "[He] loves live TV and loves chaos in live TV. I think he's actually hoping things do go wrong, to tell you the truth. To expand a little bit, there are 130 of these [remote set ups] (pictured below) all around the world. They are in people's homes, backyards, hotels, and not places wired to do that. They are wired to be where you have your dinner. So that adds to the complexity." 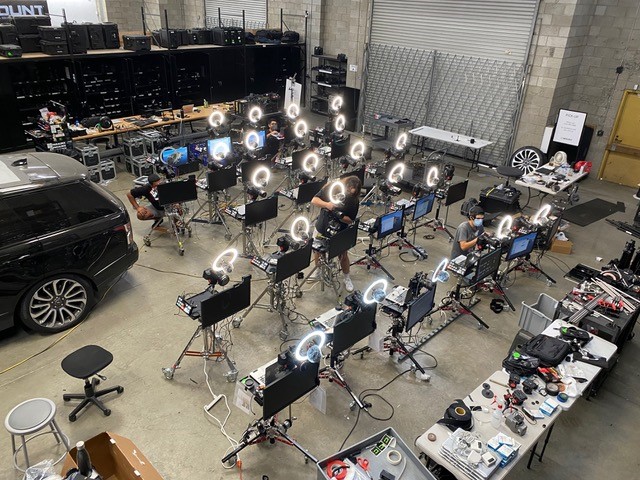 Expanding on the technological complexities of producing such a mammoth event was co-executive producer Reginald Hudlin (above left) who shared, "On the phone driving here today with one person, the call dropped twice and that was out without a picture. There's a tremendous amount of risk in what we are doing. We're using the best equipment, the smartest technicians, and we're pushing the technology to its absolute limits."

"To Reggie's point, we've got sometimes 6K cameras," added Stewart. "It then goes through a Wi‑Fi system at their end, hopefully, hardwired, as the Wi‑Fi we all have is unstable. Let's say it's a Zoom‑based system because we all understand Zoom. It then has to come into a distribution center here, has to be grouped, then taken to a truck to regroup it. From there, it has to be distributed, A, to broadcast and, B, to screen. Everything in the chain [happens] 130 times. 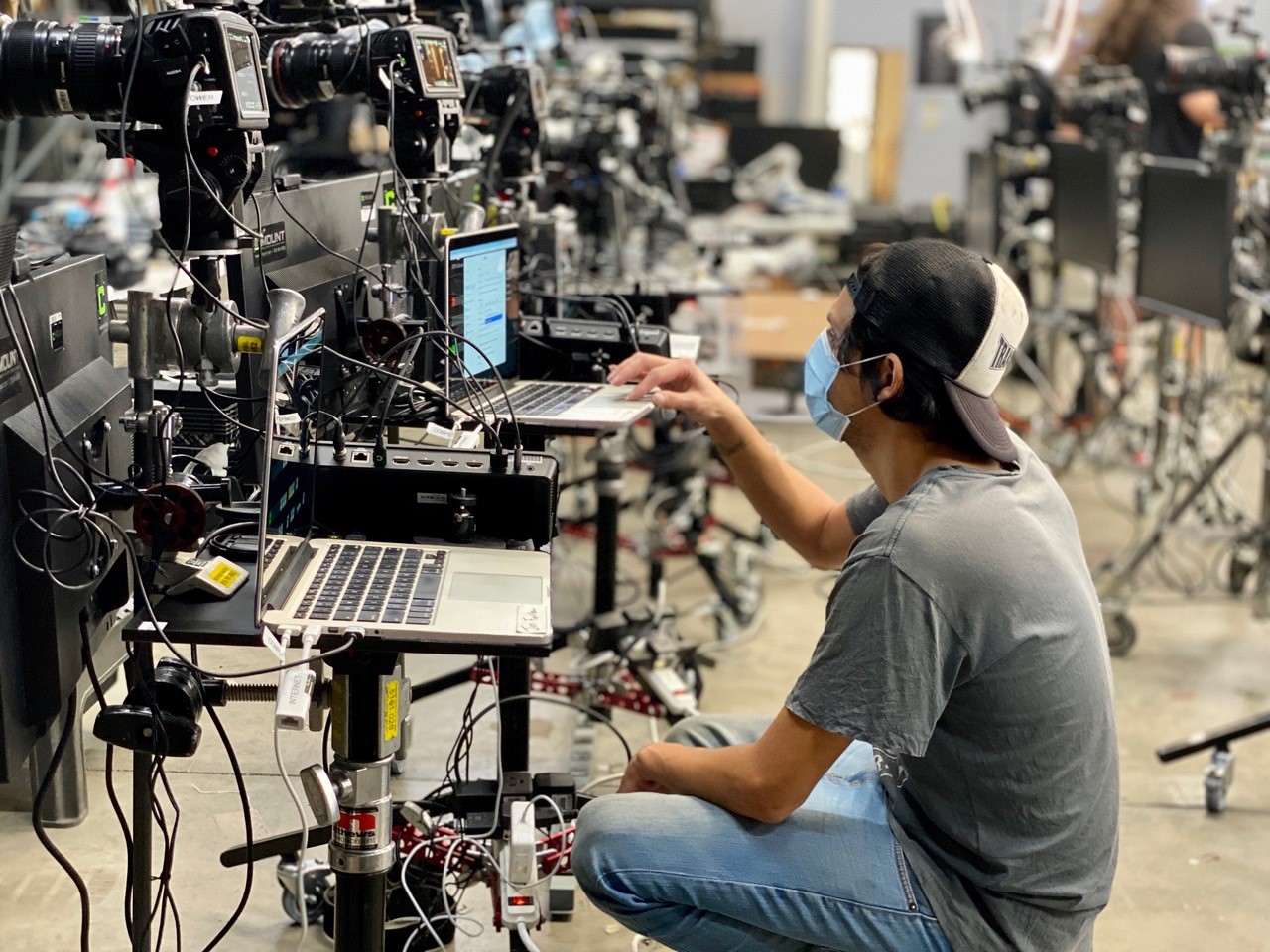 "Why are we doing this?" he continued. "This has been an extraordinary time none of us have lived through before. TV has been our friend through that whole period and brought us together. Let's celebrate it. Let's celebrate the role it's had in our lives as well as the people who have made it and who are so extraordinarily talented."

One fixture of the Emmys not incorporated in the 2020 telecast is the official pre-awards red-carpet show. Instead, Countdown to the Emmys, provided by ABC News, will stream via a variety of digital platforms (6:30-8:00 P.M. EDT/3:30-5:00 P.M. PDT). "We had thought seriously about doing a red-carpet show," explained Hudlin. "We brainstormed a bunch of ideas we were very excited about but realized we would have to not only do the three‑hour broadcast but also produce the preshow. Given the scope of the challenge of the main show, maybe an additional hour is not something at least for this year. So we begged off of that, but we hope that the home fashions will make up for what we won't get in a red-carpet show."

One thing both producers are banking on viewers enjoying is the organic 'at home' tone to the production. "We've tried to make it into a fun thing to do," explained Stewart. "It's not stuffy, not staged. We know that people are having their own Emmys pajamas made, so we are trying to make it feel very loose. We've talked to every nominee there is to try to explain what we are trying to do. People were apprehensive about having things in their houses, but I think they understand now, that we are trying to create an environment. So, a lot of people, rather than say "I don't want to do that," have said, "That's fun." One person said, "I can bring my dogs to the Emmys!"

"I know a lot of celebrities are, like, 'It's that time of the year again. I've got to break out the tuxedo or go shopping'," added Hudlin. "It's a high‑end problem, but it's a lot. The idea that they can be at home, whether they are wearing the freakiest outfit they could find in their closet that they wouldn't have the courage to bring to the Microsoft Theater, or wearing some cool pajamas, I think that part is great. They don't have to thank their kids who are watching. They can have their kids next to them on the couch. I think it's going to be great for the nominees and for the viewers because every week, these folks come into our houses. Now we get to go to their houses and get to see what they are doing."

The producers have tried to predict, and have ready a resolve for, any mishaps during the telecast, but overlooked one -- The Bobcat Fire, currently ravaging California, and burning close to the Mount Wilson Observatory (home to a cluster of radio and TV antennas). Its destruction could turn Los Angeles into a dead zone. "Then Jimmy does three hours of nonstop monologue," suggested producer Hudlin. "But, in a situation like that, the fire crisis is bigger than our little award show. We're counting on the extraordinary firefighters out there, struggling not only to protect the communication signal [that is] crucial to the entire region, but protect people's homes and protect people's lives. We have confidence that those essential workers and everyone helping out is going to do their best to keep things going."