ESPN -- Making Changes from a Position of Strength: Upfront News and Views 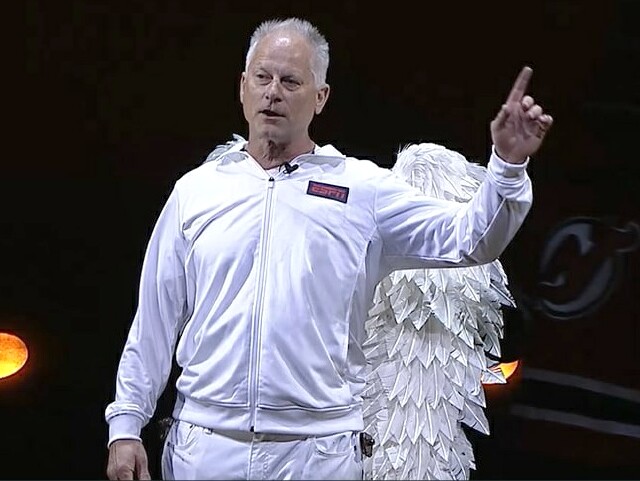 As is customary, ESPN grabbed the spotlight away from the broadcast networks on Tuesday morning of Upfront week.

Venue:  Minskoff Theater between W. 44th and 45th Streets, close to Times Square and home of the long-running The Lion King stage musical.  It wouldn't be an ESPN breakfast event without team mascots and cheerleaders guiding guests up the street escalator to the main lobby.  Freddie the (Atlanta) Falcon and the Brooklyn Nets' Brooklynettes squad did the honors this year.  More mascots and cheerleaders were all over the lobby as attendees picked up breakfast appetizers or exotic juice combinations.  Inside the theater, a rare sight ... no logos on the stage or ESPN personalities delivering game summaries or commentary from a mezzanine area stage right or left.  DJ Dilemma played tunes as the crowd settled in, offering a "good morning, good morning" salute every 10-15 minutes.  Grade: 3.5 Jacks

Presentation:  Anyone expecting a fast-paced, tightly edited sizzle reel showing off ESPN's diversity of coverage and talent at the top may have been initially stunned or shocked by the opening few minutes. The curtain rose on a solo trumpeter bathed in a white spotlight, playing for a few seconds, then joined by more Sugartone Brass Band musicians and dancers grooving to a New Orleans-style jazz tune normally associated with Big Easy funerals.  Was this a mock march to a burial after recent suggestions this organization has a dark future ahead (more subscriber, advertiser and affiliate defections) under a skinny bundle environment?  Nope. The performers soon clarified they were headed for the burial of advertising prosperity.  "Please tell us why we're hitting our KPIs and sales still suck," someone on stage cried out.  Thanks to the "voice" of Morgan Freeman (actually Frank Caliendo doing a spot-on impersonation of him) the darkness on stage vanished, replaced by fluffy clouds. "Everything is going to be all right," the voice boomed. "Welcome to the ESPN Upfront, where advertising feels like heaven!"  Out came the mascots and cheerleaders to second that thought.  It was left to ESPN President John Skipper to offer the future vision in full.  "Let me be up front about the Upfront,” he said.  “We're making changes from strength. ESPN is indispensable for fans and therefore indispensable for distributors. We are in every new package -- Sling, Sony Vue, YouTube TV and now Hulu -- at our highest economics and with 100% penetration."  Moreover, giving award-winning newsmagazine E:60 a dedicated Sunday morning hour earlier this month and expanding SportsCenter's "Right Now" updates into half-time and post-game segments in the months ahead, demonstrated "an unmatched commitment to (sports) journalism," Skipper continued.  More than 50 ESPN play-by-play, commentary and anchor people were recognized on-stage later on (see photo below), then for the first time mingled with attendees minutes after the finale.  Grade: 4.5 Jacks for taking a risk with the opening minutes/4 Jacks for the overall presentation. News:  After nearly two decades co-hosting Mike & Mike in the Morning with Mike Golic on ESPN Radio, then simulcast on ESPN2, Mike Greenberg will headline his own three-hour ESPN morning program starting January 1.  He'll operate from Manhattan with several co-hosts and a mix of sports and entertainment topics each morning.  When Greenberg makes his move, NFL Live host Trey Wingo will team with Golic for a new radio/TV simulcast (in the current Mike & Mike time period) that will continue on ESPN2 for a short while, then move to ESPNU.  The current SportsCenter 7-10 a.m. eastern time format on ESPN will eventually move to ESPN2 with Sage Steele as lead anchorperson.  Another new ESPN wrinkle for 2018 will be a noon hour team-up of recurring Around the Horn contestants Bomani Jones and Pablo Torre.  January 2 is the proposed start date for this weekday series.  In other news tidbits, versatile play-by-play caller Beth Mowins will do an NFL Monday Night Football game for the first time on September 11, teaming with former NY Jets/Buffalo Bills coach Rex Ryan for the second game of MNF's season-opening doubleheader.  Mowins will be the first woman to headline a nationally-televised NFL game and the first woman to call any NFL game in three decades.  Separately, next January's college football championship game will have its first-ever halftime show with a music superstar performance. Grade: 3.5 Jacks

Host:  Skipper was mostly no-nonsense in both tone and delivery, getting solid support from Greenberg and a variety of other network notables from anchorperson Scott Van Pelt to the pro and college football talent lineup.  And once more, SportsCenter anchorperson Kenny Mayne (pictured at top) cracked up the crowd with his appearance as "the angel of advertising," complete with big white wings. (Check out this video of Mayne in action.)  Meantime, Jemele Hill and Michael Smith, co-anchors of The Six, demonstrated yet again that they inform and entertains in a class by themselves.  Grade: 3.5 Jacks for overall hosting, 5 Jacks for Mayne, who thanks to Jimmy Kimmel's absence from ABC's event last week may take the title of Upfront Week crown jester.

Cuisine:  A mix of breakfast munchies, plus those fruit juice combos.  Best eat: cinnamon apple muffins. Best drink: apple/kale/pineapple/spinach/mint juice (as long as one stopped before reaching the pulp at the bottom).  Worst eat: nothing comes to mind. Grade: 2.5 Jacks (Note: Cuisine ratings do not factor into the final Jacks score.)

Overall Grade:  4 Jacks Memorable in a number of ways, starting with an opening sequence that will be one for the debate table.