Exclusive! Aimeé Teegarden Gets to the "Heart of the Matter" In Her Latest Hallmark Movies & Mysteries Project 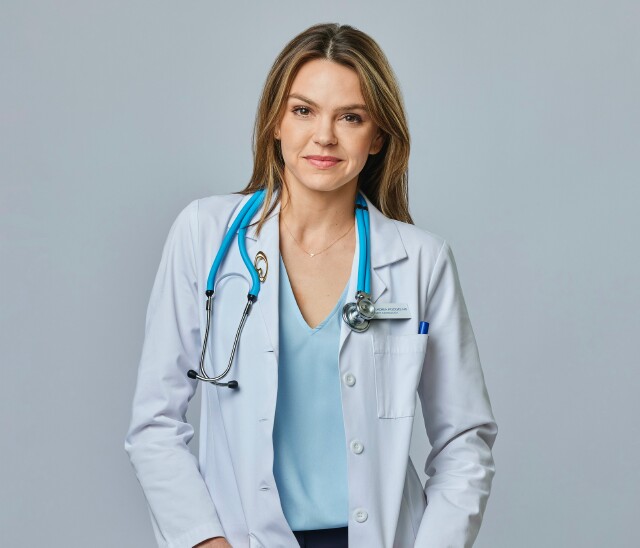 Hallmark Channel holiday regular Aimeé Teegarden switches gears this weekend, moving to Hallmark Movies & Mysteries in the premiere of Heart of the Matter. The film comes hot on the heels of Crown Media announcing an exclusive multi-picture overall deal with the star. "I'm really excited about this," she beamed during an exclusive interview with MediaVillage. "Hallmark has been just such a wonderful place to work, and so, so, supportive of me and my career, which makes me really excited for what's to come. Hallmark has also been supportive of my growth behind the camera, so I was able to shadow the director and go through all the preparation, production and script changes.

"Something I'm really passionate about is being able to tell a story from a different direction and use a different set of tools," she continued. "Hallmark has been super-wonderful with ideas I've pitched and come to them with. They're very supportive of women, supportive of new ideas, and very open to conversations and trying to tackle some of the bigger things in life. So, I feel really hopeful and positive, in the direction everything is going."

With Heart of the Matter, Teegarden does tackle some of life's bigger issues, while taking Hallmark's new direction in storytelling a giant leap further. In the film, she portrays Andie Hodges, a dedicated cardiologist intent on giving her patients the best care possible. But when an oversight sees one of her dearest patients accidentally die, the young doctor's life is thrown into turmoil, and eventually, an overwhelming crisis of professional confidence. "I read the script and I felt like [Hallmark] was making a big departure from what viewers may have typically come to see as a Hallmark film," she explained of the project. "With this, we really get an opportunity to explore some bigger themes. It feels more like a throwback to a Hallmark Hall of Fame film. I [believe] it definitely changes the landscape for Hallmark going forward, and in being able to tell stories that have more depth and a wider landscape."

Teegarden agreed that the film almost feels like a pilot for a series. "I see how it could read in that way," she said. "When we get into topical stuff with hospitals, and medical [matters], we've kind of become accustomed to seeing those in a more serialized manner. With this project, everybody really wanted to make it as authentic and medically accurate as possible, [while] still in this fantasy world. Even doing all the procedures, we had a cardiologist come in from a hospital to make sure we were doing everything correctly, clean up dialogue and make sure the machines were working correctly.

"I'm so thankful," she added. "They also had a wonderful nurse on set the days when we were shooting in the hospital, so I was able to pick her brain and ask a million questions. I take my hat off to everybody in the medical profession. With all the crazy of the last few years, I can't even imagine going through that day after day after day, and still be on top of your game and trying to do the best you can."

After portraying a medical professional, Teegarden is content to stay in the acting field admitting, "I'm too emotionally open. In this film, this doctor gets so emotionally involved and throws her heart into these patients and their outcomes, and really tries to be there every step of the way. We also get to learn at what cost." For her character, the cost is high, personally and professionally, as she finds herself targeted by a grieving mother intent on destroying her career while forgetting the humanity the doctor has for her patients, many of whom are differently abled.

"There are many different elements," she said of her character's dramatic journey. "I think we put doctors on pedestals and expect them to be miracle workers and as detail-oriented as you can be. But at the end of the day, we are all human. This film opens conversations in that it deals with death and grief, and how do we heal from that? With this project, it's two women who care so much for this person and they're left at a loss as to how to move forward. I think it's easy to take your anger, frustration, blame and shame out on everyone around you without taking a step back and really being able to afford people humanity and grace."

Given the heavy subject matter, Teegarden admitted to being "physically, emotionally and mentally, pretty spent," when production wrapped. But she did find acting in that space therapeutic. She's also extremely proud of the casting, which in addition to a wonderful performance by Gail O'Grady (as the grieving mother) includes some very talented differently abled actors.

"So much of the entertainment industry as a whole is striving to represent the world as it is, really trying to really represent everybody and everyone's voice," she commented. "Watching movies, and TV adverts that don't look like you, or you can't see yourself in those people, is so discouraging. I'm really looking forward to the industry as a whole, and everybody, getting on board with really trying to reflect what life looks like."

Moving forward with the Crown Media deal, Teegarden is hopeful her next project will continue to advance their strides in such realistic storytelling. However, she wants everyone to know she's not turning her back on the brand's famous Christmas franchise. "I think there will definitely be some holiday films in the bunch of movies," she laughed in closing. "I do kind of gravitate more towards films that feel real, and I'm looking forward to exploring some topics we don't typically see. We'll have to wait and see where that goes."

Heart of the Matter will be telecast Sunday, May 15 at 9 p.m. on Hallmark Movies & Mysteries.