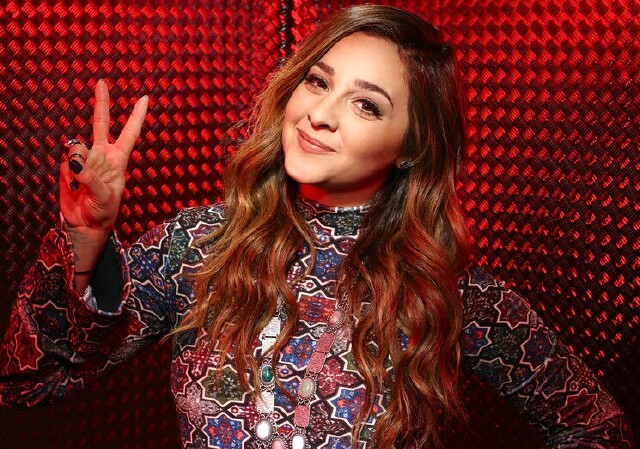 To viewers of “The Voice” this season, Team Christina member Alisan Porter’s journey thus far has been an emotional one -- something the former child star embraces.

As the title character in the beloved 1991 film “Curly Sue,” Porter, just 10-years-old at the time, appeared to have the world at her feet. Already holding the honor of being the youngest contestant to win “Star Search” (taking the title when five), her singing career took an acting detour when she landed the lead role in “Curly Sue” starring opposite Jim Belushi.

But her detour into the world of addiction almost derailed her career entirely. Porter, now 34, regained her sobriety in 2007, married in 2012, became the mother of two and thanks to a successful audition for “The Voice” last July seems to once again be on the rise. She’s crediting her past misgivings for making possible her current success.

“Adam [Levine] said it best when he said, ‘When you're being true to yourself as an artist you have to dig into those things,’ Porter told me. “I guess I'm choosing to [delve into past emotions] for my performances. No one's forcing me to.”  There’s no doubt her life experiences have contributed to some outstanding performances, in turn making her a serious contender for this season’s top prize.

“No incredible song about love or heartbreak was ever written without someone experiencing it and then choosing to write about it, or choosing to sing about it,” she said. “I think my duty as a performer and artist is to dive into the things within me that make me feel, makes me vulnerable, make me want to perform and make me connect to a song. I think it's so important to connect to a song.”

Her past performances on the show certainly stand as a testament to that. In particular her Top 10 performance of “Let Him Fly,” dedicated to a friend who didn’t survive his own addiction.

“I don't think I'd ever quite had a connection like that to a song,” she revealed. “Yes, I love singing certain songs, but this one really told the story of a time in my life. It was emotional since I got the e-mail with the different song choices and that was the one we chose. I’d listened to the Patty Griffin version of the song hundreds and thousands of times, but hadn't heard the Dixie Chicks version. For me it was important to stay true to the original, written by one of the most iconic songwriters, at least in my mind, ever. It was emotional, from every rehearsal until the performance tonight. That was the first time I got through that song without crying. I really wanted to show that emotion but at the same time I wanted to sing it properly and do the song justice.”

That performance was only enhanced by the presence of First Lady Michelle Obama and the hundreds of troops that filled the audience that night. “It was epic,” she said of the occasion. “The audience was rooting in a great way, loud, and they were cheering. I just felt a sense of responsibility to perform in a certain way for them because obviously the [troops’] whole life is spent sacrificing for us.”

As a strong member of Team Christina, Porter holds back when asked which of her team members could possibly be this year’s winner, choosing to take a realistic approach on the competition. “It would be great, but honestly, at this point I think we realize that all of us will go home and one of us will win,” she admitted. “Whomever that is, we love them and we want them to succeed and have a career. Whatever happens at this point I think we are happy about it.”

One thing she has mixed feelings about is that she has made an entirely new audience aware of “Curly Sue.” According to the singer, she had to be upfront about it.

“I couldn't not say anything,” she laughed. ”[‘The Voice’] is a TV show and they pull for these things so it was impossible not to mention and it would've been the first thing that came out. But yes, it's a nice resurgence for ‘Curly Sue.’ Well for them, for me not so much. I was ready to put her to bed.”

While new fans might be enjoying “Curly Sue” for the first time, Porter’s eye is firmly fixed on winning “The Voice” and making those all-important weekly song selections. She wanted to pay homage to her Massachusetts pal Steven Tyler with some Aerosmith, something she did outstandingly this week with “Cryin’.

There’s one song Porter hopes to deliver before “The Voice” is over and given its previous advantageous outcome it probably won’t come as a surprise to older fans. “I'd love to do, ‘Somewhere Over the Rainbow,’ just because I did it when I was little on ‘Star Search,’" she said. "That might be a cool full circle moment."

Next week the Top 8 battle it out for a place in the semi-finals. “The Voice” is telecast Monday and Tuesday live at 8 p.m. ET on NBC.