Exclusive! "DWTS" Champ Nicole Scherzinger Gets Down in "Dirty Dancing" 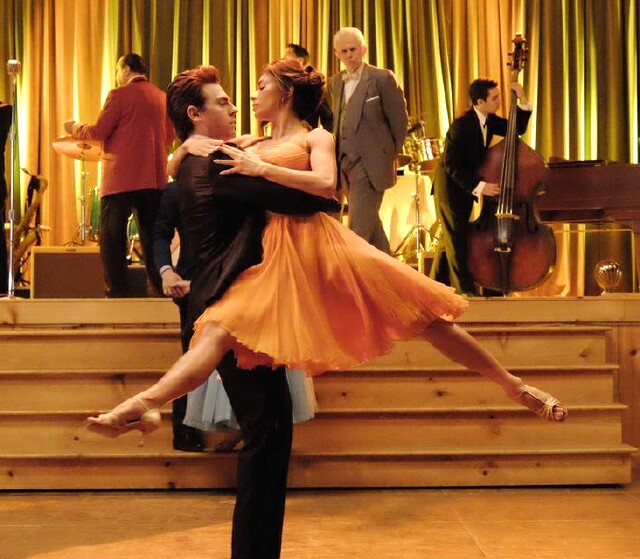 Former Dancing with the Stars champion Nicole Scherzinger made a triumphant return to the ballroom last night performing a number from her latest project, ABC’s retelling of the ‘80s classic Dirty Dancing.  It’s been seven years since Scherzinger (and partner Derek Hough) won Season 10 of the series, beating out Olympic figure skater Evan Lysacek for the coveted Mirror Ball trophy.  Much has changed for the singer/dancer since winning the show; she’s become a triple threat, adding acting to her resume.  “Oh my gosh! It felt amazing to be back!” she told me after her Dirty Dancing routine with co-star Colt Prattes.  (The two are pictured above.)  "The energy is awesome and I got to see all my Dancing with the Stars family!  That was the best!  Then we look to the left and our Dirty Dancing family was there!"

The former Pussycat Doll and X Factor judge didn’t just leap onto the screen though; instead she took to the stage to hone her craft.  A successful role in London’s West End revival of Andrew Lloyd Webber’s Cats garnered her a prestigious Laurence Olivier Award nomination for her debut performance playing Grizabella. She further honed her skills by appearing in Rent where her portrayal of Maureen received rave reviews. In ABC’s Dirty Dancing, Scherzinger portrays Penny, the dance teacher (played by Cynthia Rhodes in the original), so for her getting back to the DWTS ballroom was like coming full circle.

“I'm telling you, being on this show has really helped me!” she continued. “I am acting more and my role in Dirty Dancing is actually quite dramatic ... I did a lot of acting and some singing.” (Scherzinger is pictured with her Dirty Dancing "family" below, left to right: Tony Roberts, Bruce Greenwood, Sarah Hyland, Debra Messing, Abigail Breslin, Katey Sagal, Colt Prattes, Trevor Einhorn, Scherzinger, J. Quinton Johnson, Shane Harper.) 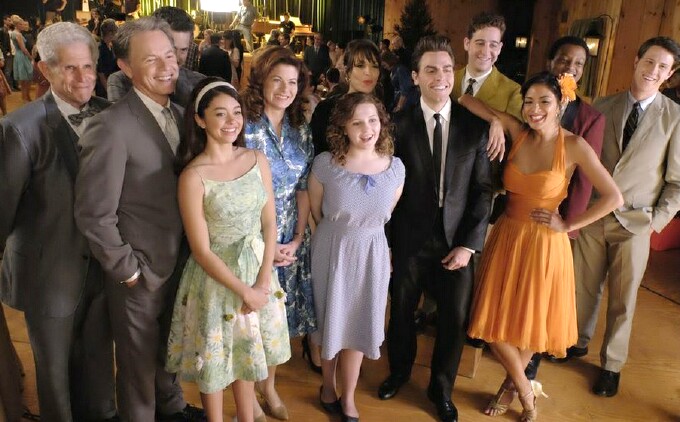 According to Scherzinger the experience of retelling the story of the iconic movie that starred another Dancing with the Stars champion, Jennifer Grey, along with the late Patrick Swayze, was “really exciting.”  She was thrilled to work with choreographer Andy Blankenbuehler. Filming in North Carolina [where the original was shot] bought a sense of authenticity to the project.  It looked like we were in the Catskills.

“I am really proud of it and the entire cast,” she continued.  “Hopefully people will just connect with it and feel from our hearts that it’s a homage; being the 30th anniversary [of the original].  To see the dancing and the freedom of that time, going through the expression of dance and then to have that music!  The music is so great and so soulful, it makes you want to dance and move.  You saw a little bit of it tonight!  We are real excited!”

Another thing she was excited about was the success on DWTS of X Factor alumna Normani Kordei.  “I’m so proud of her,” she admitted. “I was rooting for her and I loved her numbers, especially with her doing The Pussycat Dolls ‘When I Grow Up.’ I watched her rehearsal and was blown away by her!”

With Kordei’s group Fifth Harmony now a foursome, following the departure of Camila Cabello in 2016, I couldn’t resist asking Scherzinger if filling that empty slot might be a possibility.  “Honey, once a Pussycat Doll always a Pussycat Doll,” she laughed. “Can't touch this!”