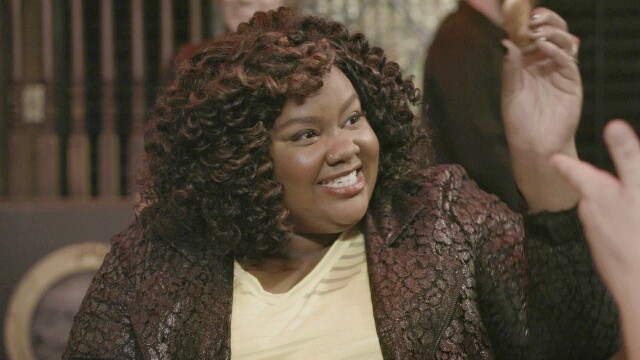 Beverly Hills, CA -- As the breakout star of MTV’s “Girl Code” comedian Nicole Byer had a lot riding on landing a series of her own. Known for her no-holds barred, self-deprecating approach to comedy, she had to have the right vehicle for her brand of humor. She found it in what is sure to be MTV’s next hit “Loosely Exactly Nicole,” which MTV very successfully presented at the Summer 2016 Television Critics Association tour.

The series finds Byer living adjacent to the Hollywood dream, somewhere deep in LA’s San Fernando Valley. Life should be rosy, but instead she’s navigating a minefield of unpaid bills, dysfunctional friendships and online dating, all handled in Byer’s overconfident, irreverent and sometimes crude comical way.

In an exclusive interview with MediaVillage after her TCA session, Byer revealed that her journey to get the series just right began with a pilot for the network -- one she describes as “essentially a f**ked-up ‘Uncle Buck’” that has since been relegated to “the vault,” she laughs.

“I played a girl who starts a fire in her apartment, gets kicked out by her roommate and moves in with her sister and adopted kids,” Byer says of the unseen pilot. “Through quirky misadventures I teach the kids things, along with myself, but it was very ‘Uncle Buck’ and very ‘sitcom.’”  Despite co-writing the unseen pilot, the result wasn’t true to Byer’s comedic voice. “It was definitely in my voice,” she adds. “But it was more ‘Nicole in a situation’ rather than ‘a Nicole situation.’”

“Loosely, Exactly Nicole” is, on the other hand, definitely full of “Nicole situations,” Byers says. “Most of the stories we tell are from earlier in my life. Like, I married a man for money; that's a storyline. I did it when I was 20; a green card situation. I managed to get myself into $30,000 worth of debt in a year and didn't know what to do. I went on craigslist and started answering ads to meet a man to marry. I ended up giving up on the idea until a friend called to tell me she'd met someone who was perfect. She picked me up and took me to a gas station in Queens where I met this man. We liked each other and …

“My wedding pictures are so stupid, so stupid,” she continues. “I look so happy.  The justice of the peace was like, ‘You look so happy, honey.' I told her I was, but inside I was thinking, ‘I am because I'm getting money!’  It was nuts, but it made it into the show.”

Byer also talked about falling in love with a stuntman while shooting a commercial in Romania, where she played a sassy fairy. “That's for real,” she laughs. “I ended up writing him a very salacious letter, so we wrote an episode loosely based on that. The letter is in there but they wouldn't let me put [all] the nasty [details] in. It was so filthy that they had to edit it down.”

In fact, the envelope-pushing dialog on “Loosely Exactly Nicole” has already raised eyebrows with MTV’s Standards and Practices. “My old roommate Evan used to call women's vaginas ‘stink ditches,’” she jokes. “That ended up in an episode, and Standards and Practices just went, ‘if you must.’ They let it through because it's not on the list of what's unacceptable. I don't think anyone has said it before on television!”

Surrounded on the show by her colorful friends Devin (Jacob Wysocki) and Veronica (Jen D'Angelo), Byer insists borrowing character traits from her personal relationships was done with the blessings of those involved. “Jacob plays a version of Evan. Originally the character was named Evan, but we changed it to Devin. Just put that D on it and nobody cares!

“[Evan] was like, ‘Why can't I play it?’ I was like, ‘Because you haven't acted in 10 years!’ Jen plays a hybrid of my friends Veronica and Shasheer (Samata, currently of “Saturday Night Live”). So it's all me and the people in my life.”

With all ten episodes of the show’s first season already shot, Byer is just beginning to fully appreciate the reality of her accomplishment. “When we wrapped I was like, “Oh, I did it,” she says. “That's when it all sunk in. I have this amazing thing and the network fully believes in me -- and that I'm funny. It also really set in when I saw the billboards on Sunset Boulevard. That was astounding!”

Michael Klein, MTV’s Executive Vice President of Original Content President, insists Byer is an important addition to the MTV brand for a number of reasons. “Authentic, completely unfiltered and really funny,” is the way he describes her. “She speaks to this audience and speaks in a language that is relevant to them and truly, truly, authentic -- and she is completely unfiltered in the show.”