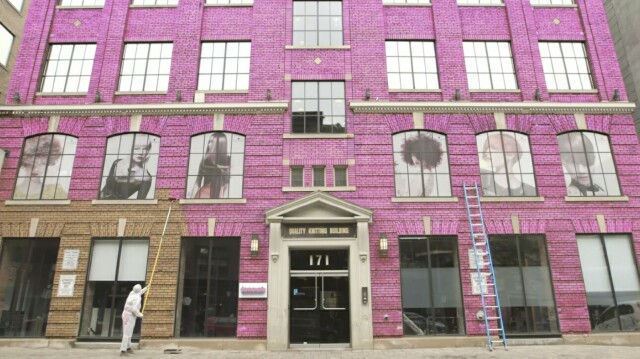 In the hilarious mockumentary-style video below, John St., an agency based in Toronto, exposes the negative side of female empowerment ads through a mock opening of a new agency called Jane St. (pictured at top).  Championed by brands like Dove, femvertising has largely been praised, but also has received some criticism for capitalizing on women’s insecurities for profit. With all-pink walls and a “Core Lady Insecurity to Target (C-LITT)” strategy, Jane St.’s goal is “to exploit the hell out of women regardless of whether it makes any sense whatsoever to their clients,” reports AdWeek. The new agency even has a website where you can upload your brand logo in order to “be empowered.” “It’s a win-win for women and girls, and it’s a win-win for brands because they sell more stuff,” Chief Empowerment Officer Marketa Krivy declares in the video (below).

The Legendary Jane Maas Talks Mad Women at the DPAA

At this week’s DPAA Video Everywhere Summit, the witty and wonderful Jane Maas, a legendary creative director and an Advertising Woman of the Year, talked about the realities of being a woman in the advertising industry in the now-iconic “Mad Men” years.  In short, sex in the office was a given, women were paid dismally in comparison to men and women were “only sometimes” treated as second class citizens. However, unlike the “Mad Men” era, today “women have taken over advertising,” Mass declared. “Women are everywhere but the very top.”  In her speech, Maas also referenced the statistic exposed by the 3 Percent Conference --that only 3% of today’s creative directors are women -- and pointed to the need for change. You can find out more in Maas’ book, Mad Women: The Other Side of Life on Madison Avenue in the ‘60s and Beyond.

Breaking Down the “Mommy Tax” and “Daddy Bonus”

A new study from PayScale looked at 1.4 million full-time employees and takes a detailed look into the “mommy tax,” or “the idea that working women are penalized with a decrease in raises and opportunities after they have children because of the unconscious bias that they will be less committed to their careers,” reports Fast Company.  Conversely, new fathers are often rewarded in the workplace because they are viewed as more responsible -- a phenomenon termed the “daddy bonus.” Looking at men and women who worked the same jobs, the study revealed that the highest income disparity is indeed between married women with children and married men with children at 4.6 percent; the lowest income disparity was between single women and men without kids at 0.6 percent, confirming these trends.

Following the example of tech companies like Microsoft and Netflix, Amazon has expanded their parental leave policy for new mothers and fathers. Women who have or adopt a child can now take up to 20 weeks of paid maternity leave, up from the 8 weeks previously allowed, Bloomberg reports. Amazon also added paid paternity for the first time in the company’s history, offering up to 6 weeks for new dads.  After the backlash of The New York Times’ report on Amazon’s workplace environment, the company is taking a step in the right direction.

In a powerful essay in The Atlantic, Michelle Obama addresses the global education crisis facing young girls today and everything they need to fight it. Right now, an alarming 62 million girls worldwide are not in school, she reports. “We cannot address our girls’ education crisis until we address the broader cultural beliefs and practices that can help cause and perpetuate this crisis,” Obama writes. When educated girls become financially secure women, she continues, they have the opportunity and power to advocate to challenge unjust laws and harmful beliefs.