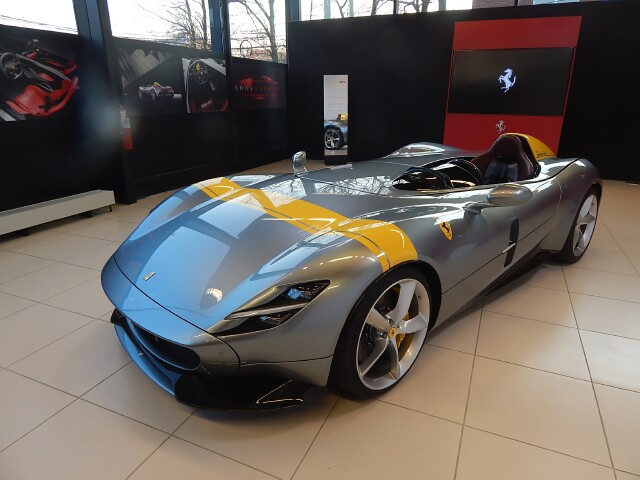 Englewood Cliffs, New Jersey -- In the 1950s, Ferrari built the iconic 750 Monza, an open sports racer that was very successful in competition.  Today, they’re stratospheric buys -- just 35 were built, and a track-proven example was sold for more than $5 million at RM Sotheby’s in 2016.  But that’s the past.  A bright red 1955 Monza was on display at Ferrari’s New Jersey headquarters during a recent visit, but it was there to complement something new.  Ferrari is once again building a Monza (photo above), inspired in part by that winning racer.  As part of the new Icona series, the Monza is being offered in SP1 (single seat) and SP2 (two seat) form, and just 499 will be made.  Production begins in March.  The cars sold out immediately to an international group of Ferrari collectors -- “upon announcement,” the company said -- despite a price tag around $1.73 million, and the fact that the new Monza has no top and can’t be registered for the road in the U.S.

Limited editions are a big part of the marketing scheme at Ferrari, and at many other supercar manufacturers, too.  Icona is based on the idea of up-to-the-minute auto technology nestled into evocative designs that recall the company’s ‘50s classics.  More such models are coming.

MediaVillage talked to Matteo Torre, President of Ferrari North America, about the company’s branding and advertising strategy.  “The Icona program, of which the Monza is the first, responds to a growing demand from our clients for very special, bespoke Ferraris,” he said.  “The aim of the program, and these cars, is to allow Ferrari to combine a very limited series car with an industrialized production process.  The result is a concept that can appeal to a wider number of existing clients who we consider to be our best clients.”

We asked about Icona advertising, and the short answer is that there’s no need.  “The nature of this program is that it is reserved for our existing clients,” Torre said, adding that the Iconas are a brand-enhancer with very limited downside.  “As you can imagine,” he said, “we have had quite a number approach us requesting to design modern versions of classic Ferraris.  As the overall number of cars produced will be extremely limited, the impact on production will be negligible.”

New Ferrari models are greeted with such rapturous attention (both online and in what are called “buff books”) that blanket coverage is assured, and expensive ad buys unnecessary.  According to Automotive News, “Prestige brands such as Lamborghini, Rolls-Royce and Ferrari often opt for little or no conventional media advertising to reach their deep-pocketed prospects.”

Here’s how it works.  Loyal customers -- often owning fleets of Ferraris -- are given the chance to put down a deposit on the limited editions, and usually there’s no need to offer them to anyone else.  Enzo Ferrari famously said that the company’s goal was to sell one less car than the market demands, and the late CEO Sergio Marchionne frequently echoed that sentiment.  The low numbers almost guarantee that, despite the high price, these rare cars will appreciate.  And then there’s the fun of driving them, often on private tracks.

Adam Stagliano, then with Weiss, Whitten, which handled the Ferrari account in North America during the 1990s, said at the time, “Relationship marketing is the priority.  A large percentage of Ferrari owners are people who owned Ferraris before.”

But Ferrari also has an internet strategy.  Inovāt, which has done digital marketing for the company, points out that Ferrari’s website -- frequented both by owners and the far-more-numerous aspirationals -- “receives a staggering amount of traffic every day.  Using advanced tracking methods, we identify which visitors’ behaviors reflect that of a targeted consumer.  We show banner ads to these visitors (to the tune of more than half a million a month) when they visit other websites to drive them back to Ferrari.”

In other words, the key is figuring out who actually has the means and the intent to buy a Ferrari, and making sure that they get regular face time with the brand.

Ferrari’s upcoming Purosangue crossover SUV (as well as a planned 15 new models by 2022) probably takes the need for marketing up a level -- since the company will have to reach many customers who are not currently its buyers.

Limited editions have worked for Ferrari before.  Only 499 LaFerrari hybrid cars were built circa 2015 (120 allocated for the U.S.), and those were also immediate sell-outs at $1.4 million.  Justin Bieber bought one, as did “I Don’t Drive 55” singer Sammy Hagar, who told me in 2016, “Things happen so fast when you step on the gas that you almost have to recalibrate your brain.  I’ve never driven anything as exciting as the LaFerrari.”

At the time, the LaFerrari was the most expensive car the company had made, but that record was made to be broken.  Marco Mattiacci, the former President and CEO of Ferrari North America, said at the time that well-heeled buyers are increasingly seeing Ferraris as investments -- especially as the price of vintage models soars.  Earlier this year, a 1962 Ferrari 250 GTO model broke the world record for a car sold at auction at $48.4 million.

With appreciation like this -- GTOs were worth less than $10,000 back in the late 1960s -- a buyer has a chance to realize more than if he or she had bought a Picasso.

Ferrari recently offered a small group of journalists a sneak peak at an SP1 in New Jersey.  It’s an interesting mix of old and new.  Its lines and all-business configuration (there’s no windshield, per se, but a “virtual windshield” that directs air away from the driver) suggest those Spartan sports racers of old, but with a lightweight aluminum chassis, carbon-fiber body panels and a modern 6.5-liter, 809-horsepower V12 borrowed from the 812 Superfast.

The SP1 in New Jersey (pictured at top) was silver, with yellow striping, but buyers can get any color they want.  Customization to a buyer’s specifications is part of the limited-edition appeal.  The SP1 and SP2 are very similar, but the former uses a tonneau cover to block off where the passenger seat would be.

Driving the SP1 was out of the question, but we did get to sit in it and make “vroom-vroom” noises. There’s a wide sill, and the car is very low, so getting into it is never going to be graceful.  But once ensconced the driver has a million-dollar view of a long hood and a fast-disappearing road surface.  Plus, ownership of an appreciating asset.