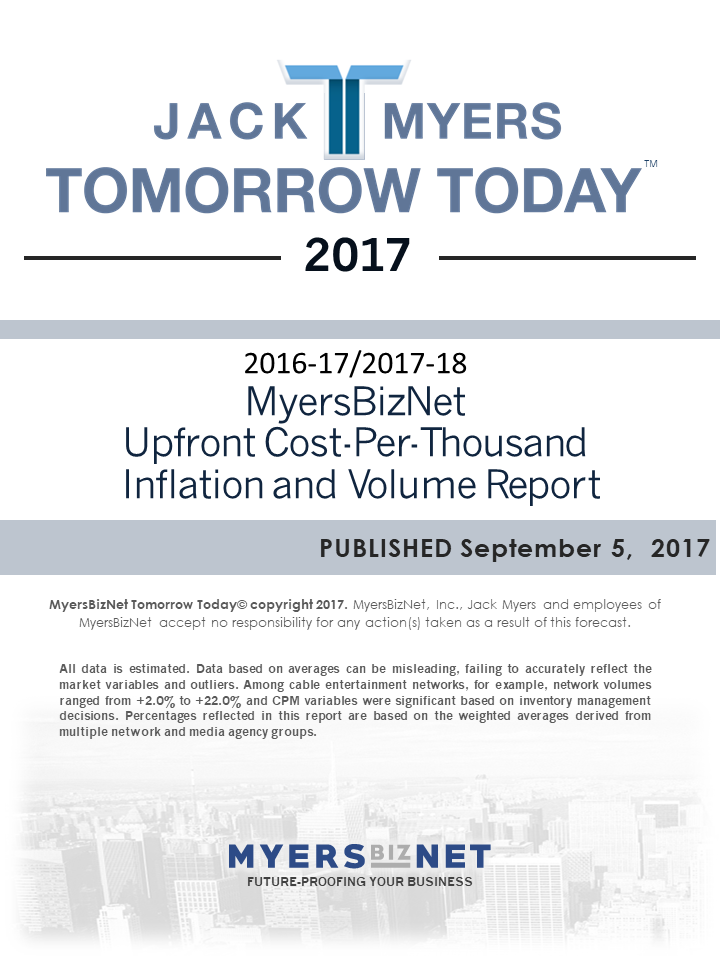 After two years of average 8% declines in Upfront spending volume in 2014 and 2015, the network television business is experiencing a renewed confidence after its second straight year of mid-single digit volume increases. Again this year, advertisers agreed to pay more per-thousand impressions  ranging from 4.0% to 10.0% across all dayparts. While primetime costs-per-thousand did not cross the double-digit barrier as they did in selected cases last year, they were close enough to give broadcasters and leading cable network groups, as well as investors, a positive outlook for the next year. Again this year, MyersBizNet has compiled data from the major agency holding companies and leading independent buying agencies, along with most major network groups. Our full report includes detailed Upfront cost-per-thousand increases for individual broadcast networks by daypart plus cable data by programming genre. Broadcast and cable volume are each reported by both their linear and digital revenue growth. (The detailed full report is being provided exclusively to those companies that contributed data to MyersBizNet for our annual compilation.)

Most of the volume increases resulted from marketers reallocating scatter budgets into the Upfront marketplace to avoid the heavy cost increases extracted by the networks as continuing audience erosion translates into declines in scatter availabilities. The well documented shift of digital to network investments by Procter & Gamble and other advertisers generated increased demand, which will also led to increased sell-out levels across broadcast, cable and syndication, inevitably placing greater pressure on scatter pricing. While most of the marketers that shifted budgets from digital to broadcast are at the bottom of the cost-per-thousand spectrum, they had a positive impact on the market (at least from the networks’ POV). As Facebook and You Tube resolve their brand safety issues with marketers, it’s likely marketers will once again begin increasing their digital spend, potentially at the expense of legacy TV models.

The most important, and previously unreported, reality impacting cost-per-thousand increases as reported by networks and agencies is the shift from Live +3 to Live +7 ratings, which significantly impacted primetime and late-night data. Most networks, in their reporting of CPM data to MyersBizNet and others, recalibrated their CPMs to reflect an apples-to-apples comparison to their 2016/17 Live +3 Upfront increases (using 2017-18 pricing and 2016-17 audience delivery). Conversely, the media agencies reported data based on actual Live +7 costs-per-thousand based on Live +7 audience delivery estimates. Since the Live +7 audiences are larger while unit pricing remained the same, the CPM data reported by the agencies was consistently below the CPM increase data reported by networks. Ironically, in our past Upfront data compilation, agencies consistently have reported CPMs above the increases reported by the networks, so this year’s aberrational reporting was notable.

Jon Steinlauf, President of Ad Sales and Marketing for Scripps Networks Interactive, home to HGTV and Food Network, commented that Scripps’ volume grew by mid to high single digits, and generated “an all-time record of $1.3 billion in gross advertising,” with their largest growth sectors being pharmaceutical, e-commerce and restaurant chains. Steinlauf reflected on the Upfront decision-making of several of his network colleagues who reported increased sell-out levels, reporting that Scripps “maintained our historical sellout levels of 50% to save inventory for our many endemic partners that buy in other cycles.”

To assure accurate year-to-year comparisons of 2017-18 data both to our 2016-17 Upfront Report and to next year’s report, in our full detailed MyersBizNet Upfront Data Report we have included both Live +3 and Live +7 CPM increases. Our full report also includes comparative data from our 2016-17 Upfront Report. It’s important to note in any analysis of Upfront data that advertisers have options to cancel a portion of their commitments and often have rights to increase their investments. The full report is available for purchase for $1,250 by contacting Maryann Teller at maryann@mediavillage.com.