For Sinclair, Acquisition of Tennis Channel is Game, Set, Match 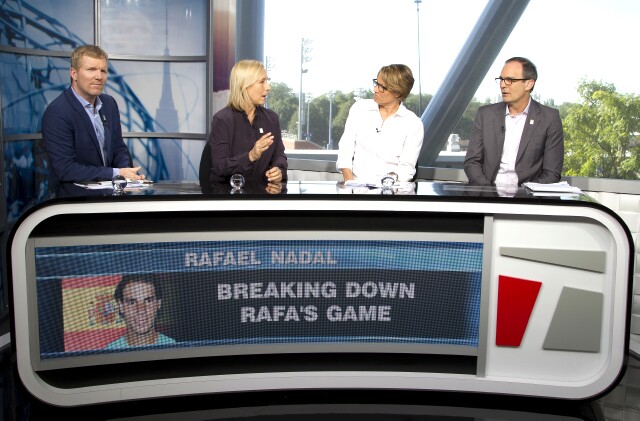 At a time when many cable networks examine how to keep their status in a multichannel operator's bundle, Tennis Channel is rounding the turn from one calendar cycle to the next in relatively grand shape. The programming service devoted to tennis and similar pastimes using a racquet was available to 37 million subscribers when Sinclair Broadcast Group assumed ownership on March 1, 2016. Three months later, 10 million more cable and satellite customers came aboard. As the rare network devoted to one sport or group of sports managed by a top owner of TV stations -- Sinclair being the biggest station owner nationwide -- Tennis Channel will end 2016 with around 50 million subscribers and expects to reach 60 million or more next summer, on or near par with the rest of its single-sport rivals.

"For us, the distribution advance has been transformational," declared Tennis Channel President Ken Solomon. "Sinclair's involvement has leveled the playing field."

Sinclair agreed to bring the network into its corner a year ago for $350 million, impressed by the more than 6,000 hours of live and taped event coverage offered each year, a 24 percent jump in household ratings over 2014, and a prestige base of sponsors including Mercedes-Benz and Samsung.  Management there recognized a unique opportunity to maximize the appeal of tennis at its local stations.

"They saw a connection to be in a national programming business with tremendous (local) upside," Solomon continued.

As part of its negotiations for retransmission consent of its stations, Sinclair was able to move the needle on Tennis Channel’s distribution with key cable operators like Comcast, DirecTV, AT&T U-verse, Verizon FiOS, Suddenlink, Mediacom and Cable One.

At the same time, Sinclair invited its stations to take full advantage of a tennis tournament in their area on Tennis Channel's schedule. Example: with a week-long tournament in Washington, D.C., WJLA-TV’s local news operation produces a number of segments on the top tennis stars playing that tournament and various behind-the-scenes activities, and also profiles a local high school or college player aspiring to turn pro. Alongside those reports, Tennis Channel supplies daily highlights to the participating station.

"The idea is to showcase tennis in their area as a mainstream sport," Solomon said. "Ratchet that up many times with the number of stations Sinclair owns, and you've got a campaign with both local and national strength. This is the beginning of tennis on the road to getting sunshine with the general public."

Another way the network attempts to build a loyal audience is its "Center Court"-coverage approach, where multiple tournaments taking place on the same day are showcased in a whiparound format. Each event that day has a production crew and announcing team tracking the action from first serve to last volley -- but on-air, viewers go live from one important match to another, switching among events depending on who's playing and how the match unfolds. In many cases, whatever matches are not covered live on Tennis Channel show up on Tennis Channel Plus, the 24/7 streaming app, or via video-on-demand. For 2017, on-location desk shows (as with the Grand Slams) and "Center Court" will be the network's modus operandi 280 days, up from 200 during 2016.

More tournaments than ever worldwide will get the first-to-last treatment by Tennis Channel over the next 12 months, including Davis Cup, Fed Cup, ATP World Tour and Women's Tennis Association (WTA) tour stops. As for the major annual events (Australian Open/French Open/Wimbledon/U.S. Open), pre/post-match coverage will be expanded, with all-night replays of key matches where possible. Past major champions from Martina Naratilova and Tracy Austin to Jim Courier serve as recurring analysts, with Mary Carillo, Bill Macatee, Brett Haber, Ian Eagle and Ted Robinson among the play-by-play and host talent.

Proctor and Gamble, Scottrade and Michelin tires are among the new Tennis Channel sponsors during 2016, thanks to some degree from the additional operator distribution. Solomon describes the jump in ad sales revenue "significant," and foresees a better outcome for the year ahead. Plus, way down the road if it makes sense, a scripted series on the tennis world is on his bucket list.

Another idea under review: producing local high-school and college tournaments for Tennis Channel and possibly American Sports Network, Sinclair's venture that occupies valuable weekend time periods on the company's stations and regional sports networks. ASN is also exploring a national 24-hour format for play on cable, satellite and or multicast, the vehicle for Comet TV, the science fiction network Sinclair operates with MGM.

"On a regular basis, we sit down and look at how together we can grow tennis in both common and uncommon ways,” Solomon says. “There’s value to be had. We're looking at them all."