For Tom Hardy, FX’s “Taboo” is a Family Plot 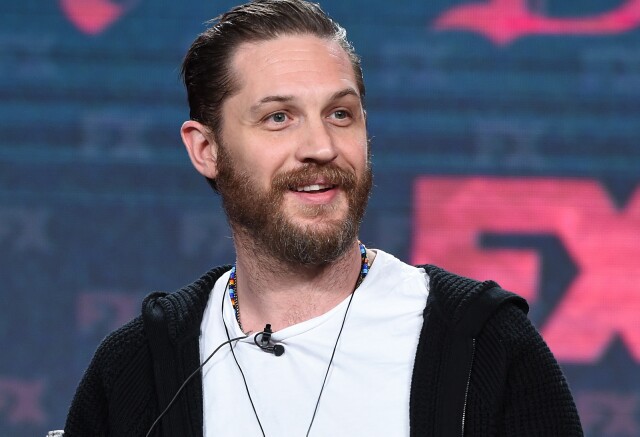 Pasadena, CA -- Acclaimed actor Tom Hardy gives credit to his dad, writer Edward Hardy, for making possible his current foray into TV drama as creator, star and executive producer of Taboo,first seen on BBC One and now being telecast on FX. In fact, he says the eight-part series, set in 1814, began with a conversation at his kitchen table with his dad about an idea he originally thought “might make an interesting hour of television.” It soon expanded to eight with his father at the helm.

“It started off as a conversation about nine years ago when I'd finished playing Bill Sikes in Oliver Twist,” Hardy (pictured at top) told reporters during FX’s day at the Winter 2017 Television Critics Association tour.  “I really enjoyed playing that and thought, ‘Wouldn't it be great to take somebody like Bill Sikes, who is kind of a villain, put him inside a gentleman's body, mix the two together and create a sort of hero in a classic period drama that could transcend all classes between the splendorous, opulent world of the high-end upper classes, and also the sort of underworld of London?” (The TCA panel for Taboo is pictured below.) 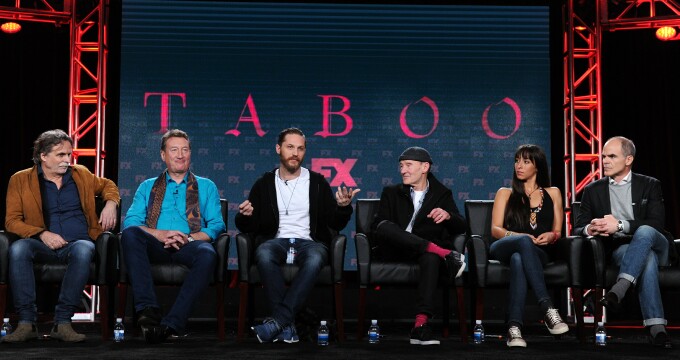 According to Hardy the conversation continued with him offering more ideas and character traits than could possibly apply to one man.  Finally his father stopped him.  "Tom,” he said, “that's an awful lot of people to put into a story.  Do you have a story?"

"No,” was the actor’s response. “I just want to play this character."

After being asked to close the door on his way out, so his dad could finish reading a novel, Hardy went about continuing his conquest of Hollywood. Then, a year later, his dad surprised him with a treatment that encapsulated all the elements of the character Tom had devised.

“He's a bristly pig,” Hardy says of James Keziah Delaney, the character he co-created and now portrays.  “This is a man who horse rides; he's bowlegged and probably has very achy joints. I am genuinely bowlegged.  I had rickets as a child.”

James Keziah Delaney is a well-travelled man believed to be long dead who returns to his native London from Africa to inherit what is left of his late father's shipping empire.  However, he discovers that his father's legacy is in shambles, nothing is as it seems and he suddenly has a host of deadly new enemies lurking in every dark corner.

For Steven Knight, the co‑creator, executive producer and showrunner of Taboo, having Hardy’s name attached to the project was all he needed to jump on board.  “If Tom Hardy is playing the lead, he is so good that of course you want to do it,” Knight says. “The idea itself was fantastic, because it was so relative to who Tom is.”

Hardy, known for playing a myriad of multi-layered, often dark characters on screen, couldn’t be more proud of the finished project.  “It just grew and grew, like, from the kitchen with my dad to what you see now, and it is far more elaborate than anything I ever imagined,” he says with a smile. “I just thought we would do a little television piece on the BBC maybe for an hour and we've sort of done something else, which is fantastic.”

An edited transcript of my interview with Tom appears below.

Is there a different pressure creating a character, rather than coming in as a hired actor?

With Taboo, every character was an extension of me [and] Steven’s and my father’s desire to create a show that had a lot of life in it. It helped that I knew who James Keziah Delaney was nine years ago, so that I could look at the other parts of the story, as well producing and being a witness to all the other parts of the evolution of the story and these characters.  Then I had to go play James as well.  It was a different experience and huge responsibility; if it went wrong I would have felt personally responsible because it was me asking people to join me.

When you create a character like this what comes first, the voice or the look?

It depends on what I’m playing.  Normally there will be a voice in my head, or I’ll see pictures in my head [while reading scripts] so I will follow those.

Were all the ideas for him there right away?

I did have them for Delaney.  He just didn’t have a story.  What’s fascinating about him is there is a sort of mythology to him, trying to find a character in the real world that also has a fantasy element to him and stands as a metaphor to change.  He’s complex and varied with equal parts dark and light. He also has a noble and ethical quality to him.  He’s a fantastical character.

Do you have a preference for revenge stories?

No, not really. There's only little bit of revenge in this story with some of the things going on and that's a theme within this.  It’s also about multiple father issues, really, and the disappointment in the son, so there are multiple layers.

Do you enjoy working in television?

I love television, theater, film, radio … I love it all, really.  A goldfish grows to the size of its bowl, so I love all mediums of storytelling.

Did you enjoy the producing side of the project?

I loved it and it’s something I would like to do more of.  It’s hard and a lot more work than I thought it would be.

Do you enjoy the challenge of a character?

If you’re not challenged you are not doing a job properly.  They are all challenging for different reasons.  It doesn’t mean you are going to be successful because something is challenging, but if it’s not …

Did you draw any traits from previous characters you’ve played and, if so, which ones?

Not really, I mean if you look into anyone that is capable of changing the temperature in a room, each one is an individual in their own right.  There is a massive difference between Napoleon and Stalin, although they are both dictators, fascinating, yet completely different, but at the same time both could be labeled as psychotic brooding types.  I can see different shades of grey on a pallet.  That doesn’t mean I am exclusive to that pallet; I just enjoy that terrain and finding new discoveries.

Can you give me an update on Mad Max: The Wasteland?

Only in so far as I've signed to do three of the [Max movies].  It's just a question of when.  I’m not sure if it's called Wasteland now because you never know with titles changing, but there is definitely another Mad Max project in the works.

What do you enjoy about playing Max?

I just love working with George [Miller].  The mythology is so deep.  I just enjoy working with an artist and someone who has the ability to be a moviemaker, as well.  It's really the whole package.

Where do you see Max going in the next film?

I have no idea.  It’s all George’s ideas!

Taboo is telecast Tuesday nights at 10 p.m. ET on FX.