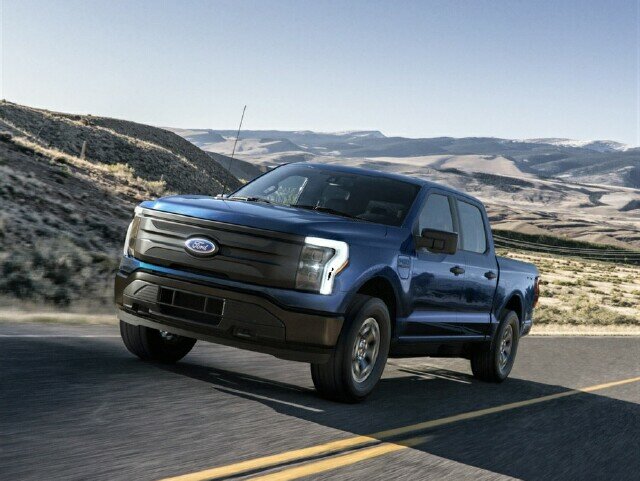 Let's turn the clock back to 2014, when Ford launched a new generation of the F-150 pickup -- now the bestselling vehicle in America for 44 years. Accompanying the truck was the company’s most comprehensive marketing campaign ever. And getting in early was important.

"Ford’s data show that truck customers begin the shopping process earlier than typical customers, starting an average of 233 days before purchase," the company said then. "Nearly half of truck buyers ultimately purchase the brand they researched in their initial shopping. They spend an average of 35 percent to 45 percent more time on dealer websites than car and crossover buyers, looking at specific trucks to meet their unique needs."

Sam Abuelsamid, principal analyst for e-mobility at Guidehouse Insights, says there are good reasons truck buyers take their time. "I'm not surprised if the customers spend more time on researching trucks just because it takes so long to go through all the buildable combinations," he said. "Last I checked there were more than 14 million permutations, and I wouldn’t be surprised if there are more now because of new premium trim levels and more powertrain options, including four that are conventional gas, plus diesel, hybrid and now electric."

Ford – then -- was ready with online content, 30-second TV spots and in-depth videos to prove that "the F-150 is a performer to help them get the job done."

OK, it's seven years later, and Ford has just released what’s likely to be the most significant F-150 in the model’s long history. The F-150 Lightning (pictured at top) is all-electric, with 230 miles of range in a SuperCrew base model that retails for an eye-popping $40,000 (with an available $7,500 federal tax credit reducing the price still more). The media loves it and thinks it's a game changer, but will the truck-buying public get the memo? This is where a big media campaign, as happened back then, comes in.

But Ford isn't ready to talk about its marketing campaign just yet. "The truck doesn’t go on sale until the spring of next year, and so it’s like 360 days away," said Mike Levine, head of truck communications at Ford. "It’s too early to share specifics."

That’s fair enough but, as the company's own research shows, it won't be long before consumers will be making up their minds about which 2022 pickup to buy. So, allow me to speculate on what the campaign should emphasize.

The truck already has 75,000 advance orders. They're what you might call soft orders, because consumers had to put down only a $100 deposit -- refundable. Still, it's a pretty good indication of interest. The key will be convincing the people who buy work trucks that the electric is actually a better, more capable vehicle. That should be possible, because it actually is.

"Here's how I would frame it," Levine said. "Truck customers aren't going to buy the Lightning just because it's electric, but because it's a better vehicle -- doing things an internal-combustion engine truck can’t do. We convinced people our twin-turbo EcoBoost V-6 was not just smaller, but can tow a bigger load, with better fuel efficiency. The same logic applied to our aluminum F-150 bodies -- more towing, better fuel efficiency. The bottom line is that it's a better solution."

Abuelsamid concurs. "I think the emphasis should be on new capabilities that you can't get with other trucks, while reinforcing that this truck can do everything any other F-150 does -- apart from range," he said. "ProPower, power backup and the giant front trunk are all key selling points. I wouldn't put too much emphasis on towing at this point though, because some customers would be better off with a diesel. But everything else about the Lightning comes across as an advance over other F-150s and at a very competitive price, especially for commercial customers. An electric Raptor running in the Baja 1000 would also be an interesting way to show off what this thing can do."

Versatility is the selling point. As Levine notes, the existing hybrid version of the truck with an onboard generator got a promotional boost during the recent Texas ice storms. Randy Jones of Katy, Texas, told Wave 3 news, "Without it I would have been in the dark and cold like everybody else in the neighborhood. Quite a few of the neighbors said, 'Hey, I'm getting one,' like, 'I'm trading my Dodge or GMC,' because in South Texas, with hurricanes and things like that, we're always having power outages."

The Lightning is like the hybrid on steroids, with lots of powering options, and the marketing campaign is very likely to emphasize this heavily. The house (or job site) can be connected via Ford Intelligent Backup Power, and ProPower Onboard allows access to 9.6 kilowatts through 10 onboard outlets (four in the front "frunk," two in the cab, and four in the bed).

"It’s electric, and built Ford Tough," an ad targeted at people who buy work trucks could say. "Take it to the job site and never be without available power again. An electric outage? Plug into your Lightning."

Or, because some versions can reach 60 mph in 4.4 seconds, how about, "This is a truck, built Ford Tough, that will take you to work during the week, and here on the weekends." Cue the drag strip images. Fanciful, maybe, but this is one fast truck.

Abuelsamid adds, "Ford might want to also consider a subscription program like Care by Volvo that bundles everything. Since the service costs are lower, they might be able to come up with a very attractive alternative to a conventional lease or loan."

Of course, Ford is going to have to go to town with social media, television buys, dealer support and celebrity endorsements. This truck is already making a splash, but it needs to be so big it almost empties the pool.

Photo at top courtesy of Ford.