Ford's Mid-Sized Ranger: It's Not a Work Truck; It's the Have-Fun Truck 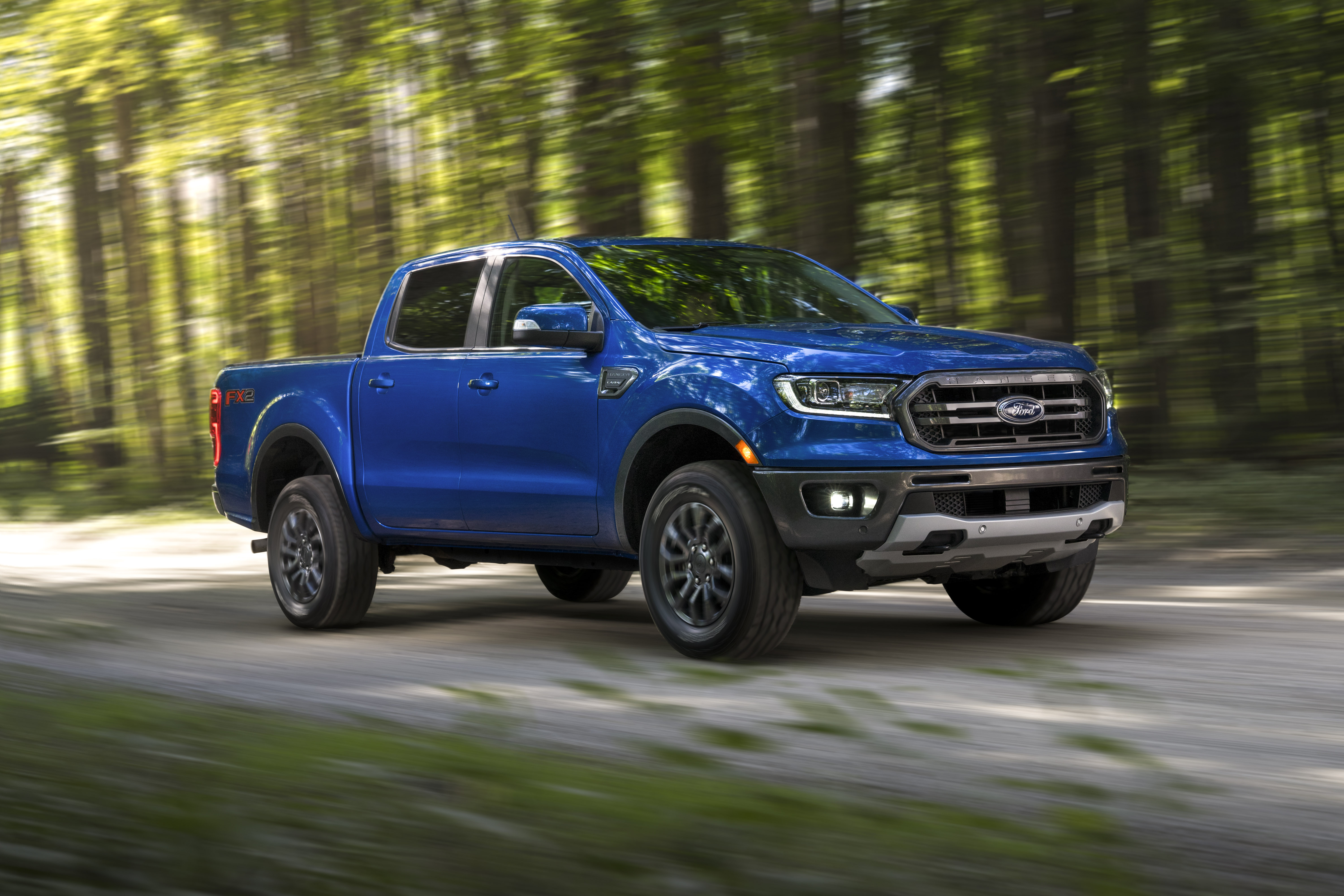 I wanted a truck for an assortment of dirty jobs that my little Honda hatchback, which tries hard, was just not capable of handling. Ford obliged with a new 2019 4X4 Ranger, which — with its compact size, hard-lined bed, tight turning circle, and decent towing capacity — was just perfect.

This wasn't always the case. The Ranger's big brother is the F-150, the bestselling vehicle in America for the past 36 years. While Americans were once satisfied with smaller pickups — remember the highly popular Japanese mini-trucks of the 1970s and 1980s? — the trend has been to either go big or go massive.

But the midsized truck market is picking up; sales have increased 83 percent since 2014. And that persuaded Ford to bring back the Ranger, a nameplate that had been dormant since 2012 (when sales were a dismal 19,000). In part, the new interest is driven by cost, since the average transaction price for the F-150 is a whopping $48,000, Edmunds reports. The Ranger averages in the mid-$30,000s, which is about the average transaction for American vehicles. The tester — loaded with features such as a sprayed-in bedliner, technology package, and $2,800 worth of equipment group options — bottom-lines at $42,005.

The Ranger actually goes back to 1982 as its own series and was initially priced at $6,203 (affordable, even adjusted for inflation). Facelifted 1993–1997 models were bestsellers; Ford dealers moved more than 300,000 each year.

There's a size creep in the auto industry, and the Ranger kept growing — effectively erasing the distinction between it and the F-150. The customer wanted bigger, so they gravitated up-market and the Ranger languished. People often buy vehicles larger than they need, sizing for scenarios that are likely to occur only once a year (four-wheel drive for that rare snow, a three-row SUV that helps out at the family reunion). And they're not likely to be deterred from that behavior.

Brian Bell, Ford F-150 and Ranger marketing manager, said in a MediaVillage interview that the market for compact and midsize trucks "got very small very quickly," but then started to come back. He said that F-150 and the Ranger have very different buyer profiles, with the Ranger being the fun vehicle to the F-150's work truck. Todd Eckert, Ford truck group marketing manager, has characterized the Ranger buyer as someone who "drives his truck to work, not for work."

My test truck, a crew cab model with room for five, could certainly serve as an all-purpose family vehicle. It's significantly bigger than the original 1982 version, with a 126.8-inch wheelbase instead of 108 inches. The Ranger is 34 inches longer and 15 inches wider than the model released when Ronald Reagan was in the White House. But, crucially, it fits in a standard parking space, doesn't require a ladder to enter, and has a reasonable load height.

An interesting thing about the Ranger is that it doesn't have the usual blizzard of trim levels (there are just three) and engine options. In fact, there's just one motor, a 2.3-liter EcoBoost producing 270 horsepower and connected to a 10-speed automatic. In a tested form, it delivers a combined 22 mpg, not exceptional by any means, but not terrible for a truck, either.

The offering seems to be working, with combined Ranger and F-150 sales delivering in the second quarter their second-best showing since 2004. The Ranger sold 20,880 units, though the F-Series was far ahead with 233,787. Year-to-date sales for the Ranger after the second quarter were 30,301. 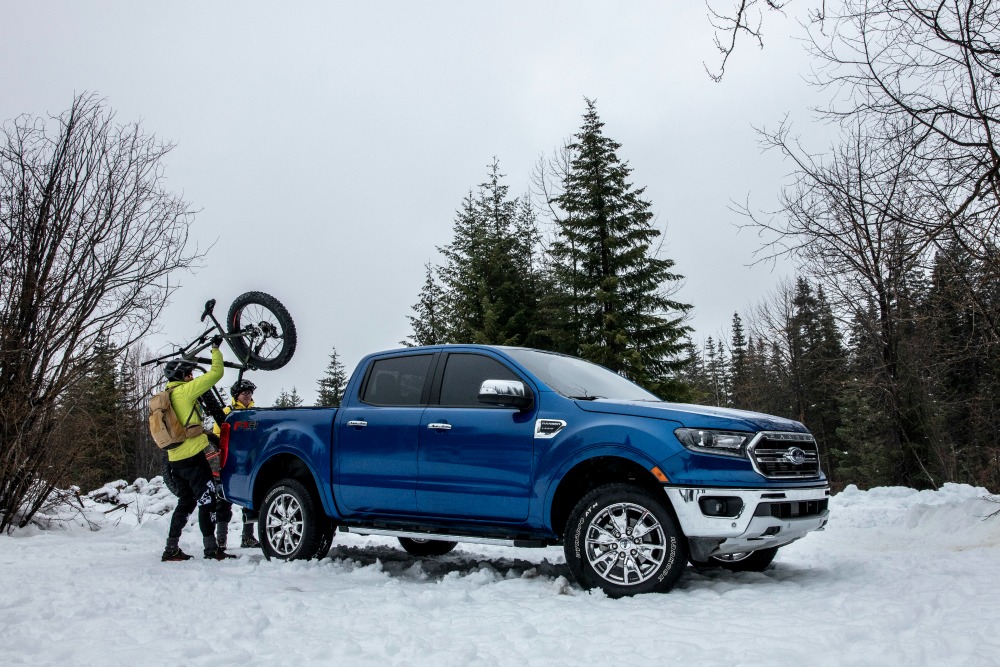 The campaign, "Tough Has More Fun," uses 15 athletes who "follow their passion for adventure across the U.S.," filmed by Outside TV. In one ad, we see the (scary) sport of base jumping in an Arizona canyon, with the Ranger as the chase vehicle. Another ad shows snow surfers coming down a mountain near Seattle; the prominently displayed Ranger gets them to untouched powder. The ads are being shown on TV and in movie theaters, as well as being displayed on social media. The YouTube versions are two minutes long, highlighting destinations such as Boston, Denver, and Phoenix, and each has more than a million views.

Chad Callander, Ranger consumer marketing manager, told MediaVillage that Ford worked with Outside magazine and its multimedia arm to find the right cities and adventurers for the videos. "It turned out very well, and has been very well received," he said. "It's resonating with potential customers who are adventure-spirited people."

The ads skew really young, but current Ranger buyers do not. According to J.D. Power, "Overwhelmingly, men buy these vehicles [89 percent]. Their median age is 58, and they earn a median annual household income of $101,820. Nearly a third (29 percent) say they are retired. Most midsize pickup owners agree that they prefer to buy from a domestic company (59 percent)."

Bell attributes the age of current buyers to "loyal customers who have been waiting for the truck to come back into the market. It's not surprising to see those demographics in the early stages." So, it looks like the ads, featuring 20-somethings, have a lot of work to do.

Bell pointed out that Ford is not so much targeting a particular age group for the Ranger, but an idea. "We conducted research in places like Los Angeles, Phoenix and Boston, and the midsize truck buyers like to use their vehicles to get out and recharge their batteries, ignite their passions…. The truck is the most important part of their adventure gear."

Of course, some buyers will go with the Ranger because they aspire to an adventure lifestyle, not because they're currently engaged in it. The same potential — the ability to go off-roading (though only 10 percent of SUV buyers actually do) motivated millions of sport utility sales.

When asked about its channel mix for the Ranger, Bell said that Ford doesn't break out its media spend: "TV is important, but we're definitely aiming for a bigger social media presence. Social is key for the Ranger. We did a pre-launch event on Facebook." Target sales level? "As many as we can, plus a few more," he said. Based on initial sales, the prospects look good.

I have no doubt that my Ranger would get me to the top of a base-jumping canyon, if I had even the slightest desire to go there. But instead it works just fine for dump runs, car towing, and furniture moving — in the city and its suburbs.