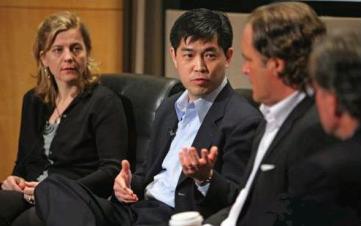 Originally published: February 22, 2008 --  Online content is providing a development laboratory for networks and studios, agreed panelists at yesterday's JackMyers Future of Media event hosted at The Paley Center for Media in Los Angeles. "Fox TV has begun using the Internet to seed properties and use it as a development and R&D lab to plant certain ideas, grow them, and find out if there's some interest in a concept, especially in comedy and animation," commented Fox Entertainment president Kevin Reilly.

Reilly also advised that he will be focusing on creating a "bridge" between the creative community and digital distribution opportunities and will begin experimenting with new content development models. "Talent has no bridge to new distribution platforms, and they want in on them," he said. "We need to use our human resources and focus to build a bridge for the creative community."

Speaking on a panel moderated by Jack Myers with Sony Pictures Televisionpresident Steve Mosko, Disney/ABCEVP DigitalAlbert Cheng, and JoostEVP Content and AcquisitionsYvette Alberdingk-Thijm, Reilly said "content has become depersonalized and abstracted. You need to start with the creative seed that comes from talent, spark and things we can't quantify. With all these ancillaries and business models… and as everyone is staring at them waiting for the kettle to boil… you can suffocate the creativity that sometimes leads to enormous businesses. I honestly believe some of the writers were feeling that as part of the underlying emotion [of the writers strike]; that all these opportunities were going on with their creativity." Lead sponsor of the JackMyers event was Teletrax and co-sponsors were FreeWheel and Vibrant Media. The event video will be available next week at JackMyers.com.

Mosko agreed, saying the company's online Crackle unit offers an opportunity to explore pro-sumer interests and identify creative talent. He also pointed to the Adam Sandler Gay Robot pilot originally developed for Comedy Central that was repackaged into short clips and has been a hit on MySpace and other sites. Cheng added "the Internet is an open platform and the barriers that existed for talented people to get into Hollywood are now gone. It's up to us to learn how to search for them."

Alberdingk-Thijm added the Internet lowers the risk of content investment as studios "put content online and learn what is successful internationally." She highlighted the online series Meth Minute from Next New Networks and Dog Dating as creative online-only series. "There is an enormous amount of untapped talent that normally wouldn't have made it through the barriers," she said.

At the JackMyers event and in separate interviews with JackMyers Media Business Report, the executives acknowledged the writers strike provided a much needed "pause" for the business, although they stressed the economic and personal costs were difficult. Reilly suggested "the pilot system has gotten over cooked. Business models were designed in a three network marketplace with networks having an 80 percent share of market. There is a contraction in the marketplace that will not come back."

Reilly suggested Fox' 15-week schedule is built for the future. "It was not originally designed that way but now it's increasingly more difficult to finance a 20-week schedule in a universe where the audience does not accept repeats [on the network]. We need to speak a new digital language, and I feel the pain on a daily basis of trying to integrate with new media."

Cheng pointed to third party research showing that "TV network sites have become the primary destinations for TV long-form content." While he acknowledged there is room for aggregators like Joost, and YouTube is very strong for short form content, he believes TV network sites will continue to be "the go-to places for network content. For the first time," he said, "we have the ability to determine why people are using certain devices. We are learning why and when they go to websites. Our learnings will contribute to understanding what the best models will be in the future." Alberdingk-Thijm explained "Joost is a next generation platform for social entertainment and the company is exploring emotional triggers for people to build around video content." The goal, she said, is to "make sure there is the ability for audiences to create community around content."

Disney's primary focus is on monetization and Cheng is placing less emphasis on distribution, he says. "We are trying to hit a metric based on revenue-per-viewing-hour-per-person," he advised. "The opportunity is to get more people to watch our shows. If we can monetize each viewer at equal or more than we are generating on broadcast by being more efficient in ad delivery, more targeted and offering more engagement, then we can finally get to better economics than broadcast-only." "It's all about targetability," agreed Alberdingk-Thijm. "The more you know your consumer the better. People want to watch free video and don't mind the advertising if it is specific and relevant."

ABC has developed interactive ad pods that are proving to deliver high audience recall, positive attribution to brands, and improved engagement scores, Cheng announced. "Based on the research, the online audience is incremental, so while we have a long way to go, the economics we are driving to are good for us." Cheng also argued "in order to get consumers more engaged you need better creative in advertising… more interactivity. The world of display advertising is low value and we prefer not to have banner ads on our sites. Relevancy is really important; we need to deliver advertising viewers really want to see. And," he added, "we hope there will be fewer commercial breaks so people will enjoy the story telling and appreciate the sponsor." 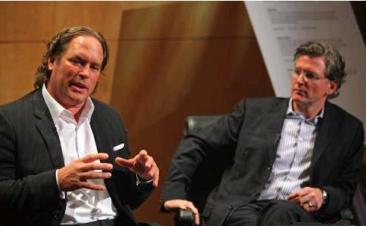 The primary digital agenda at Fox is to feed content to Hulu, the online joint venture between NBC and Fox, and to develop experiments to use the web as a development farm team. But Reilly stressed Hulu and other distribution venues ultimately depend on the network's ability to launch good product. "We are seeing a fair amount of product on the network where our studio partners are saying this is a great business for them but we're looking at a rating that might not be such a great business for us. We are still measured by ratings and who is winning the night. It's no longer a one size fits all business," Reilly stressed. "It used to be a fairly standardized business. Standardized licensing fee; standardized deficit structure; standardized syndication structure. Now all bets are off. We are focused on what we have to do to nurture programs and make them profitable for us. We have to remain strong in our core business and remain vigilant in experimentation, I don't think anyone has the answer; the model."

Sony's Mosko agreed: "We depend on the back-end for our profits. We have to get shows far enough along where we can get to the back-end money. We'll do everything we can [to support the networks]."