Fox’s “The Exorcist” Continues with Shocks, Surprises … and Bromance? 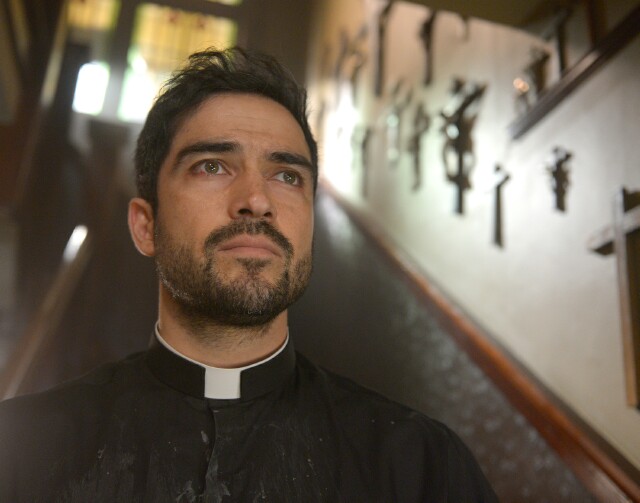 The Exorcist has returned for a second season on Fox with a few major changes. Removed from the confines of the first season’s suburban Chicago locale, it got off to a sprawling start with hero priests Father Tomas Ortega (Alfonso Herrera, pictured at top) and the now ex-communicated Father Marcus Keane (Ben Daniels, pictured below with Herrara) on the run across the sprawling vista of Middle America.  “We wanted to hit the ground running this year,” series creator and executive producer Jeremy Slater told me. “Anytime you tell a possession story over the course of 10 episodes, you always have that ‘getting to know the family and the case story’ and you have to slow burn that.  If the person is bouncing off the walls and spewing pea soup to in the first episode, it doesn't leave a lot of room for the other nine.”

“Last year we did struggle in those first four episodes, finding compelling and exciting stuff for Marcus and Tomas to be doing, all while slow burning the Casey possession story [and the eventual return of Regan MacNeil from the legendary 1973 movie],” Slater continued.  He went on to explain the first season of the series did take some “weird detours” offering the exploration of the possessed homeless of Chicago as one that “didn't necessarily pay off in the larger picture.”  So this season the producers are slow burning a new family storyline.

“It’s important to get to know and care about [this family] before the shit hits the fan,” Slater explained. “So Marcus and Tomas had a very aggressive sort of James Bond opening where you come in at the end of one mission before the next mission starts.  In the first two episodes, we saw this big propulsion of exciting storylines but it will settle down into the rhythms of the show that fans are more familiar with.”

This new family Slater refers to is a diverse foster family under the care of Andrew Kim, played by series newcomer John Cho (pictured below).  Kim finds one of his wards targeted by a powerful force of evil. 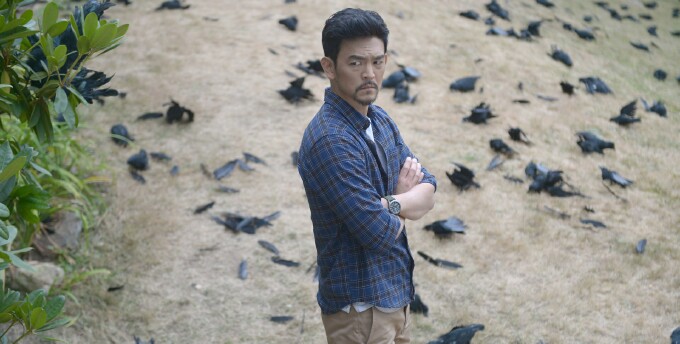 For Cho, getting to be a part of The Exorcist is a dream.  “It's been great and really gratifying,” he told me.  “These characters are very deep and the situations really expansive.  Having a foster family feels even more precious than a biological family in the sense that it's more fragile.  On an intellectual level, I've been learning the language of this genre, as I am new to it, and that's been very exciting.  Of course, it’s also an honor joining the franchise and a tremendous amount of fun.”

Despite its dark tone and subject matter, when talking to anyone from The Exorcist, the word “fun” pops up a lot -- especially when it comes to returning series leads Daniels and Herrara.

“I always say having the chance to share a set with Ben is great,” Herrera said when we recently talked. “He's such an intense actor and very intense when he's on set, but when they say cut we love to laugh. We crack jokes and it's needed.”

“Likewise,” Daniels added.  “I adore working with Alfonso.  He's working in a different language so he comes to the set so enthusiastic.  It's hard enough for me to learn the language for the exorcisms, as it's an endless list of names and prayers and you have to get it exactly right.  But he is doing it in a completely different language to his native tongue, so he comes to the set totally prepared and I'm someone who learns their stuff backward, so we can do it and then relax a little.” 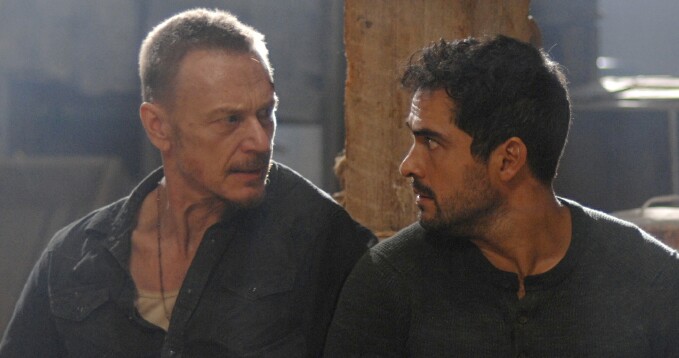 One thing the two actors are laughing about is the perception of just how close the two characters are. Thanks to some intense scenes between the two actors, there’s theory that the evil-fighting duo may be closer than we see on screen.

“What's weird about the show is that we don't play it like that at all,” Daniels said with a laugh.  “It's just that we’re so committed and impassioned about what we're talking about in this environment that it reads like kiss, kiss, kiss.

“There's something that happens when we work together that we are not playing at all.  Which is kind of cool in a way because they have this bond and connection,” he continued.  “They don't know why they have been shoved together or what is going on, so there's a constant struggle and they are battling for people souls, so it's very, very intense.  If they leave us in a two-shot, which they tend to do a lot of the time, you get the spark between us, which is kind of great, really.”

“There are a lot of videos on YouTube of a romance between Father Tomas and Father Marcus with a lot of romantic music,” Herrera added.  “What Ben is saying is very true.  There seems to be this other perception that is quite funny; this intensity that can be interpreted as something else.”

“I seem to remember someone mentioning something and it might have been in the writer's room,” Daniels said.  “Of course, if we get to season five they will be a couple, so I guess it's all up for grabs really,” he laughed.

The Exorcist is telecast Friday at 9 p.m. on Fox.