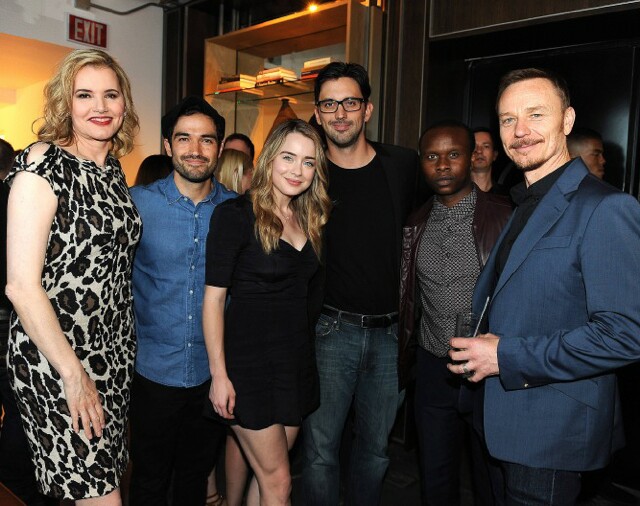 One thing the cast and creators of Fox’s upcoming series “The Exorcist” want everyone to know is, it is not a remake. Its narrative does, however, exist in the same world as that of the formidable 1973 horror classic, which its producers say leaves open the possibility of a guest appearance by Linda Blair, possibly as her character from the movie, Regan MacNeil.

At the time of its original theatrical release, “The Exorcist” quickly became known as the most terrifying movie ever made (surpassing even Alfred Hitchcock’s 1960 horror masterpiece “Psycho”). The tale of a young girl battling demonic possession and the two priests assigned to de-demonize her was a monster hit in every sense of the word, often proving too intense for sensitive movie-goers. It was not uncommon to hear of ambulances being called to theaters to tend to patrons who had passed out or become as violently ill as poor Regan, who memorably spewed pea soup during her ordeal. While “The Exorcist” would later become one of the most successful films of all time (spawning two less-successful sequels and a prequel) Jeremy Slater, the executive producer of the series, promises a whole new “Exorcist” experience for television.

“This isn't a remake or a reboot,” Slater insists. “Were not writing the movie [people] love out of existence; we are saying that story happened and this is 40 years later with a brand-new cast of characters and a brand-new story. The original is a perfect film in every single way. You will never tell that story better -- only longer.”

Heading the cast of the Fox series is Academy Award winner Geena Davis as Angela Rance, a successful businesswoman convinced one of her two young daughters is dealing with forces unknown. For Davis, a fan of the original film, the opportunity to delve into the subject matter was just too good to refuse. (She is pictured at top left at a special screening of "The Exorcist" pilot in Hollywood with co-stars Alfonso Herrera and Hannah Kasulka, Executive Producer Jeremy Slater, and co-stars Kurt Egyiawan and Ben Daniels.)

“Obviously I saw the original movie and loved it,” she said. “I was horrified and terrified by it. Everyone I know seems to have seen it when they were 13, no matter how old they are. I saw it at the drive-in! I can't believe my parents would let me see ‘The Exorcist.’  Maybe they just didn't know.

“I’d read [the script] and thought it was a very cool idea,” she added. “It was so well written.  I love that it’s a different take on it. There’s a reference to the stairs and the two priests from the original [film], so it is a world where we know that that happened. It’s just much later and now happening again.”

In fact, the cast and crew admit to not doing any homework in preparing for the upcoming series, standing united in their insistence that it will not tamper with the legacy of the movie. “I've probably seen ‘The Exorcist’ about 50 times. I'm like a freak about that film,” said British actor Ben Daniels, who plays elder exorcist Father Marcus. “When it appeared in my inbox I originally thought, ‘You just can't mess with this, it's sacred! This has to be really good because it's going to tread on a lot of toes.’”

But after reading the script all that changed. “I thought it was quite clever,” he admitted. “They're not trying to remake it, which was my fear; I just thought they were going to do a TV remake. A lot of people do think that and people are already ready to gun it down. But it has a lot going for it and I can't wait to see where they take it.”

According to Slater the series’ big picture involves evil on a much larger scale. He’s refusing to demean his vision of the show by turning it into an “X-orcist Files” that simply deals with a possession of the week.

“It was never going to be a procedural and if you get to episode three and Fathers Marcus and Thomas are teaming up to solve the case of ‘The Jersey Devil’ you have gone badly off the rails,” Slater insisted. “Then [the show] is just ‘Sexy Priests,’ and while there might be an audience for that, I wouldn’t know how to write that show. A big part of the reason I took the job was to prevent someone else from remaking 'The Exorcist.' What we're aiming for is to build on that world and what’s happening 40 years later.”

Which begs the question, where is Regan MacNeal these days? While no firm plans are in place for Blair to reprise the role that made her a star, or even to make an appearance, the show’s producers are not ruling out the possibility.

“Linda Blair? Call us,” Slater laughed. “We would love to have her in a cameo. But if we bring in Linda or anyone from the original film part of the fun would be doing something you wouldn’t expect, like make her a bad-ass nun, but mainly [just] so I can geek out with her on set.”

Slater’s thoughts are echoed by “The Exorcist” mega-fan Daniels, who beamed at the suggestion of having Blair on set. “Well, that would be an awesome day at work,” he enthused. “I'm sure they're thinking of it.  I do know someone is bringing William Peter Blatty [the original writer of the book and film’s screenplay] to set while we're shooting, so I'm already really excited about that.”

The opinions and points of view expressed in this commentary are exclusively the views of the author and do not necessarily represent the views of MediaVillage.com/MyersBizNet management or associated bloggers. Photo of cast by Frank Micelotta/Fox.​