By Steve Gidlow March 04, 2020 Behind the Scenes in Hollywood Archives 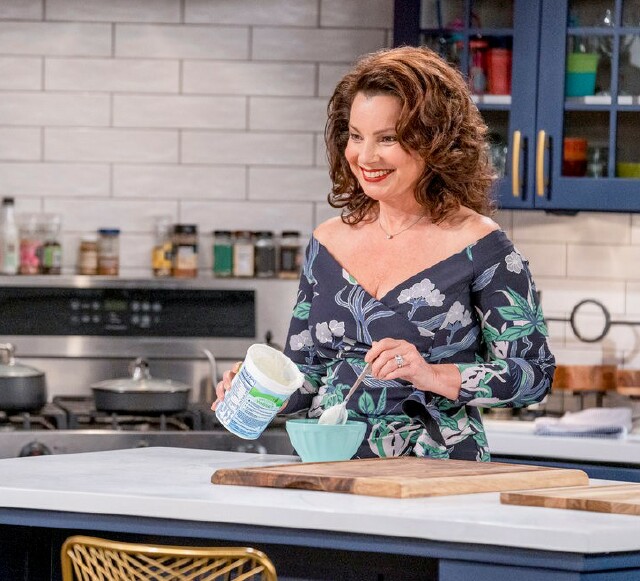 In the early 90’s it was almost impossible to find a TV viewer who wasn’t enamored by “The flashy girl from Flushing, the Nanny named Fran.”  CBS’s hit sitcom The Nanny made a household name of star Fran Drescher and is now a pop-culture classic in reruns.  When that beloved series ended, Drescher hosted a daytime talk show and starred in two more sitcoms, 2005’s Living with Fran (on The WB) and the autobiographical Happily Divorced in 2011 (for TV Land).  Now she’s at it again, starring in the new NBC comedy Indebted.  (Editor’s note: Be sure to read Jack Myers' classic Lunch at Michael’s interview with Drescher.)

In fine Fran fashion, a funny thing happened on the way to the casting office.  “I was actually about to go out and sell my own idea when this came along,” she told MediaVillage in a recent interview.  “[This] sort of fell in my lap.  Dan Levy, who created the show, had written in the script ‘a Fran Drescher type.’  My manager said, ‘Well what about Fran Drescher herself?’  And the casting person replied, ‘I’ll have to get back to you.’”  Thankfully they did, and Drescher landed the role that was written for her.

According to Drescher, there were a few other contributing factors to accepting the role -- the first being her mom and dad.  “My parents are very precious to me,” she shared. “They’re still living, and they were so excited by this project.”  So was her ex-husband and creative partner Peter Jacobs, whom Drescher has remained close to since their 1999 divorce after his much publicized coming out.  “Peter also thought it was a great thing,” she said.

“I like playing characters that are not mean spirited and are positive and loving,” she explained.  ““When I first started my career, I was always kind of the hooker with the heart of gold.  I don't like to be mean.  I like to be self-deprecating.  That's sort of my brand of comedy, and I think that my fans have embraced and have come to expect it.  I like to give them what they anticipate with as much bang for their buck as possible.”

In Indebted, Drescher plays Debbie, who along with her husband Stew (Steven Webber) is forced to move in with their son Dave (Adam Pally) and his wife Rebecca (Abby Elliott) after squandering their retirement fund.  “I think this is the first show in many years that I've not been called Fran in,” she laughed.  “I’m [also] not a producer on this, and that’s something I’m getting used to.  I haven’t been on a project that is not my project for many, many years.”

Although she isn’t creatively involved, Indebted couldn’t have come at a better time professionally for Drescher, who recently began a collaboration with former Crazy Ex-Girlfriend star Rachel Bloom on a musical version of The Nanny for Broadway.  Despite having experience on the Great White Way, Drescher won’t be reprising her iconic role. “I could possibly play Sylvia (Fran’s mom), but that’s not really my ambition now,” she revealed.  “Of course, there will be the fashions, but there’s no set vision of what it will be other than a version of what everybody saw.  Visually it will make great eye candy.”

According to Drescher, collaborating with Bloom has been great.  “We both like to eat so there’s always food when we get together,” she laughed.  “I think we’re very similar in a lot of ways.  We're both women who write, executive produce and star in our own projects.  I feel it’s a very symbiotic rapport and very, very, good.  I hadn’t watched [Crazy Ex] before, but when the opportunity came up, I binged it.  I thought, ‘Okay, this is something really special,’ and it was a credit to the producer who came up with the idea.  I really give them kudos, because it’s a little outside of the box while also being right on the money.”

Drescher is not ruling out a possible reboot of The Nanny, something fans have been championing for a while now, and the possibility of working with her former co-stars, including Charles Shaughnessy, fondly remembered as Fran Fine’s employer and eventual love interest, Mr. Sheffield.  “Charlie and I are great friends and I’d relish any opportunity to work with him,” she said.  “He’s such a dear friend of mine as is, Renée Taylor, who played my mother Sylvia.  But for now, I’m doing Indebted. I promised that would be the next big thing, so first I have to honor that commitment.”