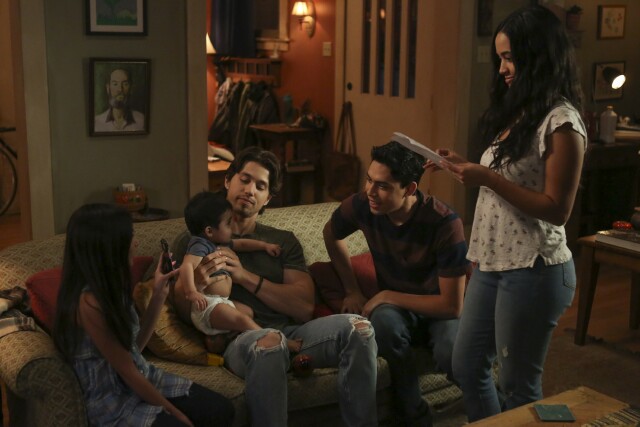 Pasadena, CA:  Twenty-five years have passed since Party of Five  first hit the airwaves on Fox, making huge stars of cast members Matthew Fox, Scott Wolf, Neve Campbell and Lacey Chabert.  During its six-year run, the series continually reduced viewers to tears, long before This Is Us.  Helmed by the original creating team of Amy Lipman and Chris Keyser, a re-imagined version of the series is set to premiere soon on Freeform, with the central story shifting from five siblings dealing with the deaths of their parents, to the timely topic of an immigrant family splintered by deportation.

“Chris and I had lots of opportunities over the years to sort of revisit the story,” explained Lipman to reporters during the Freeform/ABC day at the Winter 2019 Television Critics Association tour.  “I think we waited until there was a good reason to do it.  As we began to see what the political climate of the world is these days and began to see stories like this on the front page of every newspaper, we began to realize that what we had [created] 25 years ago had sort of transmogrified into families of kids who are living without their parents in a very real way.”

Developing a reboot really hadn’t occurred to the Lipman and Keyser team, she said. “We looked at what was going on in the news and said, ‘This is a story that leaves [its] characters in a similar kind of situation.’  It has the advantage of two things. One is, it's real. It's happening every day.  The other is that [in] the original Party of Five, the parents stayed dead for six years, and the fact of that never changed.”

That fact alone completely changes the dynamic of the five children that form the Acosta family in the, new version. Unlike the Salingers in the original Po5, the Acostas still have their parents, albeit from afar.  “One of the things that excites us about doing the show now is that the parents are dealing with issues,” Lipman explained.  “How do we try to parent our kids from a distance?  How do the kids deal with social services?  How is their footprint in the community changed by this?  It's our intention to make it different, and yet at the same time there are moments almost like Easter eggs.  There is a scene in the pilot that was a scene in the original [series] pilot 25 years ago that has changed slightly, but I think there are enough for our fans from long ago to see echoes of the original series.

“What's most interesting is that the relationship between these kids, and the tragedy that happens to them, is present, ongoing and changing,” added Keyser. “Emilio (Brandon Larracuente) is different from Charlie (Mathew Fox). Charlie had to deal with taking over his father's life in a world in which he was secure in knowing who he was.  Emilio is a DACA kid.  He doesn't know if he's going to stay or not.  The fact of his being a DACA kid, and the fact his world may change tomorrow, is integrally part of the story."

"I have not watched the [original] show," admitted Larracuente, who as Emilio is forced to abandon his independence to care for his family. "I did know coming into the first audition it was a very popular show that resonated with a lot of people years ago.  So there is also an immense pressure, but also tons of excitement going into this project, knowing that it had such a very dedicated fan base."

As the eldest son, Larracuente, 24, has affectionately been dubbed “the old man” by his younger castmates.  "I'm always in bed by nine or ten," he laughed.  "I do feel a big brother relationship with them."  Larracuente also told MediaVillage that while his character has an irresponsible side, in real life things are a little different for the youngest of his own family.  “Since moving out on my own I have taken on a lot more responsibility that I didn’t have as a child,” he shared.  “Still, every actor brings a part of themselves into a role, so I really try to put myself in Emilio's shoes.

"I'm Puerto Rican, [other cast members] are from the Dominican Republic, Mexico and all over," he added.  "We are all Hispanic, but from different parts of the world and that amazes me.  Dealing with the topic of deportation, friends have said this is a story that needs to be told.  We aren't trying to duplicate what the other show did. We're trying to tell a story, and if we keep things centered around that I hope it resonates with people."