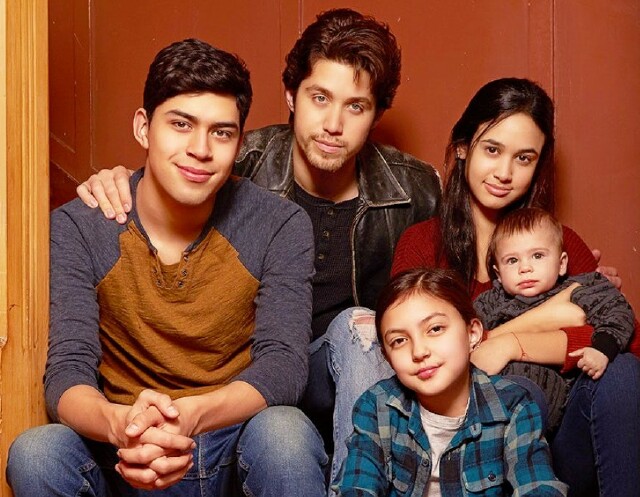 At a time when reboots, revivals and spin-offs are sprouting throughout television like crabgrass, it has become common for showrunners and networks to take risks reimagining popular titles to share heartfelt stories through a new lens.  After a critically acclaimed, six-season run on Fox from 1994-2000, the creators of the original Party of Five have rebooted their hit series to do exactly that.  While the Golden-Globe winning ‘90s series centered on the Salingers, five siblings in San Francisco who lost their parents in a car crash, Freeform’s reboot sets the story in modern-day Los Angeles from the perspective of a Mexican-American family in a poignant, emotional and culturally relevant narrative that should hit home for all of us.  I might go so far as to say that it asks the question "Who are we?" over and over again.

The new Party of Five follows the Acostas, comprised of siblings Emilio, Lucia, Beto, Valentina and baby Rafa, whose parents are suddenly arrested when officials learn that they have been living in the country illegally.  Much to their dismay, a compassionate but unwavering judge officially deports their parents back to Mexico. “Don’t punish our children for something I did twenty-three years ago, please!” cries their father.  But as the judge makes clear, the law is the law and his hands are tied. The young party of five is left to fend for themselves.  Emilio, Lucia and Beto struggle to adjust to their new normal but are determined to keep their family together and to raise Valentina and Rafa as best they can.

The first five minutes of the premiere episode, to be frank, hit me like a sucker punch.  As a child of immigrants from El Salvador who fled to the U.S. in the middle of a war, stories like this always hit close to home.  Thankfully, because immigrants becoming citizens was not as archaic a process in the ‘80s as it is now, there was never any fear of having my parents taken from my sister and me.  The scene where the Acosta siblings have to say goodbye to their parents was absolutely heart-wrenching.  Their father looked at his children with pride, separated by a chain-link fence, telling them how proud he is of them, urging them to be strong as their mother begged them to stick together no matter what.  I'm not ashamed to say that I cried more than once.

Not surprisingly the arrest quickly takes a toll on the Acosta kids.  Emilio is suddenly torn between following his dream of being a musician, taking on the mantle of head of household and overseeing the operation of his parents’ restaurant. With the increasing stress of having Child Protective Services keep a watchful eye on them, he struggles to keep revenue flowing at the restaurant and ensure that the employees now under his watch are paid on time while providing for his siblings. The once star student Lucia begins to rebel as the stress of her family’s circumstances start to get the best of her.  Beto, a young athlete who was already struggling with his grades, skips school day after day to help Emilio run the restaurant and support the family.  The prodigious genius Valentina, arguably the most mature member of the group, begins to have post-traumatic nightmares about her mom and dad.

Brandon Larracente (13 Reasons Why) deserves recognition for his portrayal of Emilio, who may at first be dismissed as a rebellious, womanizing heartthrob, but doesn't hesitate to take on the challenge of functioning as the presumed guardian of the Acostas.  Also noteworthy is Elle Paris Legaspi (Vida) as Valentina, who gives a heartbreaking performance when the Acostas are arrested and again when Valentina delivers a tear-jerking monologue during the court scene that seals her parents’ fate.  Niko Guardado and Emily Tosta have a tremendous rapport as twins Beto and Lucia, respectively, particularly in the second episode.  Their back and forth reminds me of my own sister and me (we're only 15 months apart in age), with Beto trying to live up to the bar his sister has set so high, their frequent “cover for me” scenarios and their determination to always have each other’s backs.  A bond of that kind isn’t easy to convey, but the two young actors manage to do so in a wonderfully naturalistic way.

Sure, this new Party of Five could have centered around another average white American family, but what would be the point?  Does anyone really want a practical remake of the original show?  Freeform and the showrunners took a big risk in giving the reboot a timely political edge, telling a story that hasn’t really been explored in this manner, offering insights into the lives of a threatened young family that was not randomly struck by tragedy like the Salingers, but was instead ripped apart by oppressive policies in a country that was practically built by immigrants.

There are very few series that have centered on a Latinx-American family.  The few in recent memory include the similalrly reinvented reboots of Norman Lear’s One Day at a Time, now on Pop, and CBS’ Magnum P.I., led by Jay Hernandez, along with Starz’ groundbreaking dramedy Vida.  I think the only Latinx family I had to watch growing up that wasn’t on Univision or Telemundo was on the ABC sitcom George Lopez.

Getting to see a family like the Acostas on television truly means a lot to my parents, my sister, my nephew and me.  I applaud Freeform and the entire creative staff of Party of Five for not only bringing a Latinx family to the forefront but for shining an unsparing spotlight on immigration issues.  While there are similarities, the story of the Acostas isn’t anything like that of the Ayalas, but it could have been.  And it is certainly the story of many families in America today.  Television of this kind is going to make a difference.

TV/Video Download's Steve Gidlow had the inside scoop onParty of Fiveearly last year.  You can read his February 2019 interviews with the producers and stars of the show here.

Party of Five is telecast on Wednesday at 9 p.m. on Freeform.