By Steve Gidlow January 24, 2020 Behind the Scenes in Hollywood Archives 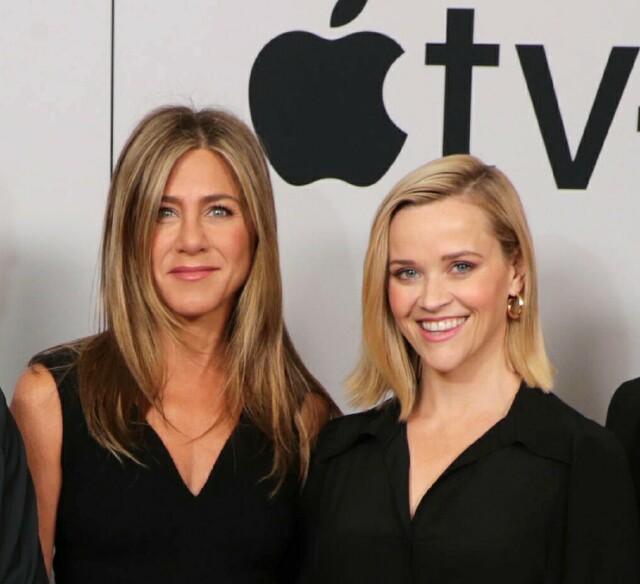 When Reese Witherspoon became a Friend of Friends, guest-starring in 2000 as Rachel’s little sister Jill in two episodes during the show's sixth season (The One with Rachel’s Sister and The One Where Chandler Can’t Cry), little did she know an ongoing friendship with Jennifer Aniston would be formed.  It’s a bond that continues to this day, as the on-screen sisters star in the Apple TV+ drama The Morning Show, which was recently renewed for a second season by the new streaming network and brought Aniston a SAG Award. (Further, their co-star Billy Crudup was recently honored with a Critics Choice Award.)  Witherspoon was actually slated for more appearances as Jill on Friends, but as she revealed in a recent interview a severe case of stage fright and the thought of filming in front of a live audience squelched any desire to return.  Tabloids suggested at the time that on-set tensions between the two were the reason, but when Witherspoon was recently quoted as saying, “We’ve been friends ever since,” those rumors were finally laid to rest.

The two recently appeared on a panel for The Morning Show at the Winter 2020 Television Critics Association tour in Pasadena, where their camaraderie was on full display as they fielded all sorts of questions about the show and what direction the second series of the #MeToo-influenced series might take.  Alas, no spoilers were revealed.

When reporters asked Aniston about “breaking Instagram” she assured them her “little sister” had been a great help in that department.  (She recently joined the social media platform to promote the show, and promptly crashed it.)  “[Being] a baby in the whole situation of social media, it just so happened that I had something to talk about, as opposed to sharing my breakfast or my daily routine at the gym,” she laughed.  “[The show] felt like something important I wanted to share.  [Social media] wasn’t available to me when Friends was starting, or when I had my first television show,” she continued.  “But I do find [my work] to be something worth sharing.  I’m proud of our team and our show.

“[I’m] still a newbie working on [social],” she continued.  “However, this lady here [Witherspoon] knows what she’s doing.”

Witherspoon credits having a 22-year-old daughter for being social-media savvy.  She also credits her daughter with the career choices she’s made in recent years, as she is now of an age where she can watch her mother’s work.  “From the time I had her, when I was 22-years-old, it changed my entire world view,” Witherspoon said.  “It made me a better person; less of an asshole, honestly.  Who I see as representations of women on film and how women are perceived, and how women are written for, is really important.  And who directs, and who creates is important, as well.  We all struggle with trying to do the right thing and put great work into the world for our kids, so they see an accurate representation of what the world is.”

With The Morning Show’s central theme essentially the tale of a Matt Lauer-like news personality and his fall from grace as host of a morning news program following accusations of sexual harassment, both Aniston and Witherspoon (who in addition to starring, serve as executive producers) are pleased with the feedback the 10-episode series has received from people working in television news, even if that feedback is very alarming.  “A lot of people in the industry, in news, that we have come across, journalists, have said it’s staggering how spot-on it is,” Aniston revealed.  (Oddly, there was no response to that comment from the 200-plus journalists in the room.)  “[That was] all we could hope to do; replicate the world in as true a fashion as we possibly can.  So, we’re thrilled with the response to the first season.”

“I have to say I’ve had more of a personal response to this,” added Witherspoon.  “More people have stopped me and said they love the show.  And to see the audience response, I mean the only metric I have for that is Rotten Tomatoes, which says 94 percent of the audience likes it, which is who we make it for.”

It was a strong day for The Morning Show and Apple TV+ all around.  The Q&A was part of Apple’s first-ever presentation at a TCA event, and even though it was the final day of a long tour, all seven panels were well attended.  Those panels included the animated musical series Central Park, featuring the vocal talents of Josh Gad, Kristen Bell and Daveed Diggs; the limited series Defending Jacob, starring Chris Evans and Michelle Dockery; the drama series Home Before Dark; the anthology series Little America, which tells romantic and inspiring stories of immigrants in America and counts among its executive producers Kumail Nanjiani; the live-action comedy Mythic Quest: Raven’s Banquet, about a team of video game developers, with Rob McElhenney, Danny Pudi and F. Murray Abraham, and the documentary Visible: Out on Television, featuring Wanda Sykes, Wilson Cruz and Ryan White.  And later that night, Aniston was honored with a SAG Award for her emotionally charged performance on the show.