In FX’s “Mayans M.C.,” Tests of Loyalty and Brotherhood 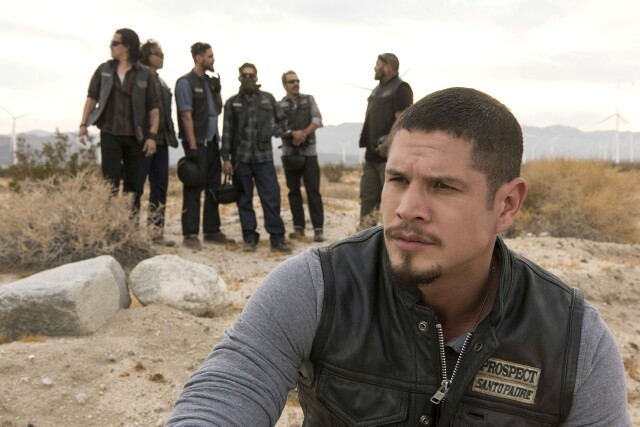 During a time when inclusion, cultural representation and diverse storytelling are top priorities among television networks, FX has led the charge with the Donald Glover’s Atlanta, crime drama Snowfall and Ryan Murphy’s triumvirate of hits American Horror Story, American Crime Story and the LGBTQ+ centered Pose.

Continuing that modern tradition, the network’s latest series, Mayans M.C., a spin-off of the successful Sons of Anarchy, features an all-star Latinx cast including JD Pardo (pictured top right), Clayton Cardenas, Danny Pino and Edward James Olmos.  Created by Sons showrunner Kurt Sutter, the series takes place two and a half years after the events of the preceding series and follows the life of Ezekiel “EZ” Reyes (Pardo), the newest prospect, or member-in-training, of the infamous Mayans motorcycle club under the wing of his older brother Angel.

After a shipment of contraband is hijacked by a rival gang, the Mayans retaliate under order of Miguel Galindo (Pino), head of the Galindo cartel who suspects there is a traitor in their midst.  Once the culprits are apprehended, Galindo uses gruesome tactics to extract information from them and discovers that the Mexican rebel group Los Olvidados -- the Forgotten Ones -- are behind the heist.  Galindo had not worried about the rebel group as they were merely a nuisance, but it has since grown stronger.  Now that things have gotten personal, he sets out for vengeance against Los Olvidados.

As a prospect, Ezekiel is given menial tasks such as washing the motorbikes, keeping watch while the members have their meetings and moving an occasional corpse.  But there is something special about him.  Not only do we learn that Ezekiel was a once-proud Stanford-bound pupil who somehow ended up involved in a drug-running, weapon-trafficking biker gang, but he set out to do much more with his life. The bright-eyed star student sought to do his family proud, pursuing a life of opportunity, true love with his high school sweetheart and even fatherhood.  We don’t know exactly what happened “that night” where everything in EZ’s life took a turn for the worse, but viewers learn to care for him within the first ten minutes of meeting him.

EZ also has a particular set of skills -- a rather strong sense of observation and perception that harkens to Robert Downey Jr.’s titular character in Sherlock Holmes.  He uses his keen senses to gain favor with the leaders of the charter, but it gets him into trouble more often than not since he is “just a prospect,” as they say, and is meant to blindly follow orders.

EZ’s story tugs at the heartstrings, particularly with those who, like myself, grew up in lower-income communities where many people set out to achieve great things, refusing to not let their surroundings dictate their fates, only to have circumstances and desperation involve them in questionable circles and unlawful activity.

To the Latinx community, and the majority of ethnic communities, family is above all, no matter the situation.  Mayans M.C. focuses heavily on that traditional concept, testing EZ’s allegiance and challenging where his loyalties lie, not just to the brotherhood he hopes to join, but within his own family, as well.  During a tender moment with his father (Olmos), EZ apologizes for getting him “mixed up in all of this.”  His father simply tells him, in Spanish, “Don’t ever apologize for needing your family.  Blood is blood; the only thing that matters.”

Each episode of the first season of Mayans M.C. is named after a sign of the Mayan zodiac, and their astrological significance plays a heavy hand in the themes of their respective episodes.  The premiere episode, named Perro/Oc, meaning dog, is a symbol of new beginnings, new friends and new consciousness.  It is the perfect name for the first episode. Those born within Oc are known to be loyal, dependable and instinctive and are said to have the ability to assess everything going on around them.  Like many things related to the zodiac and horoscopes, it can be hit or miss -- but this couldn’t be a more accurate description of EZ.

JD Pardo portrays EZ with charm and a ton of heart, wanting to know more of his past and hoping he can still get that bright future he’s always wanted.  Olmos plays the working-class father of EZ and Angel with such authenticity he reminds me of the men of my own family a bit too well, right down to the quiet but heartfelt conversations and willingness to help his flesh and blood without hesitation – the sign of a true patriarch.  Emilio Rivera reprises his role from Sons of Anarchy as Marcus Alvarez, the “Padrino” (godfather) of the Mayans’ Oakland charter, in a rather chilling performance as the soft-spoken but deadly leader.

Mayans M.C. is the latest addition to a small but growing list of current series centered around Latinx characters, and it is certainly a step in the right direction for impactful cultural representation.  It touches on relevant social issues like immigration, drug trafficking and gang violence while accurately depicting very real inner-family conflicts like loyalty, redemption, pride and the fine line between allegiance and blind servitude.  Further, while there are a handful of references to Sons,  Mayans stands on its own as something new and exciting.  Diversity continues to define FX at its best.