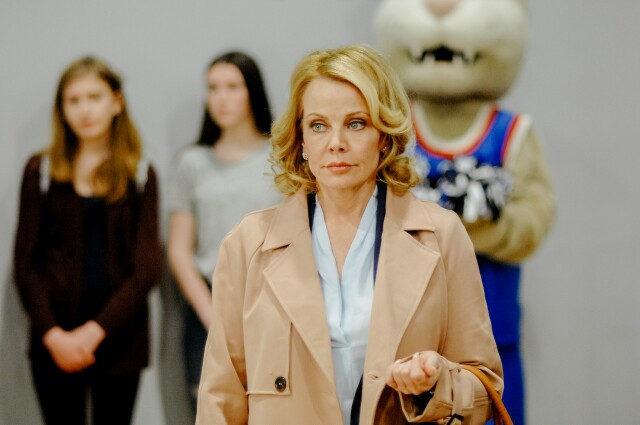 In a career that’s seen her portray the loving mother more often than not, actor Gail O’Grady (pictured above) takes a decidedly different approach to parenting with her latest character in the Lifetime movie Identity Theft of a Cheerleader.  For O’Grady, the chance of taking on over-achieving, demonstrative smother Angie Patterson was simply too good an opportunity to refuse.  “I think I read two pages of this,” O’Grady laughed during a recent exclusive chat with MediaVillage.  “As soon as I read the title and it had the word ‘cheerleader’, and ‘identity theft’, I was in.  Actually, during the first few pages I started dialing my manager and said, ‘Take it!’”

In the film, telecast Saturday night as part of the network’s ongoing cheerleader-themed programming event, Angie Patterson is a stern but loving mother who’s disappointed by some of the life choices her now 30-year-old daughter Vicky (Maiara Walsh, pictured below) has made.  Vicky’s decisions to drop out of high school in her senior year, work a dead-end retail job and have a relationship with an unmotivated boyfriend don’t sit well with Angie, who simply wants the best for her daughter.  So, when the opportunity to have a high school do-over and impress her mother presents itself, Vicky leaps at it -- albeit with someone else’s identity.  As Vicky re-enrolls in high school and begins to ace her final year re-do, suspicions as to whom she might be arise, driving the unbalanced student to protect herself and her newly acquired identity at any cost. 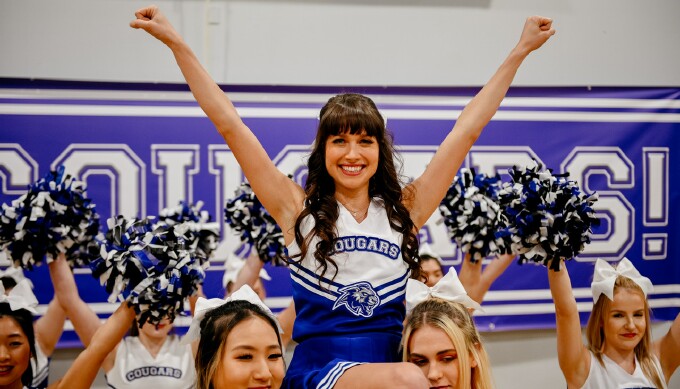 O’Grady is no stranger to Lifetime and is proud of the relationship she’s forged with the network over the years.  “I don't remember the first movie I did for Lifetime,” she shared.  “But I’ve done a ton and I love working for them.  I've always had a good time and the fans are the most loyal and fun people around.  So anytime Lifetime calls, I do it!

“I enjoy [the] escapism,” she said of Lifetime movies.  “Lifetime treats me so well, and I admit to loving the formula, even when the character isn't the nicest, which is the case with this cheerleader [movie].  It's always interesting to play somebody who isn't warm and fuzzy.  Although, in this one, it was a little difficult because my Maiara, who played Vicky, made it heartbreaking.  If I looked at her sideways, she would have tears in her eyes.  She was great.”

That wasn’t the only challenge for O’Grady, who as a mom to a 15-year-old had to compartmentalize her personal ideas of parenting.  “Anytime you are developing a character, you look for something and never judge the character,” she explained.  “You look at all the pieces and try not to insert personal feelings and judge them, you just put them together.  I mean a nasty person doesn't wake up in the morning thinking they are nasty; they just get up and go about their day.  Angie wants the best for her daughter and for her to succeed.  She just happens to push a little too much.

“I believe most parents usually check themselves every day,” she added.  “We grow up thinking we're not going to repeat what mom or dad did, but that’s hard for me to comment on as I had great parents and won the lottery in that department.  The only time I ever see kids being pushed, possibly beyond their limits, is on the news and often no matter what you do, people are going to do what they’re going to do.  I don't know any parents like this, but I understand why Angie would want the best for her daughter.  As parents, we all do.”

That said, O’Grady did identify with the movie’s do-over element.  “Who doesn't wake up in the morning and want a do-over of something?” she laughed.  “We all have certain parts of life, like high school, or those moments of, ‘If I knew then what I know now ...’  High school is often very edged and dramatic with a lot of pressure to be good and popular.  We make things that happen in high school so important when in reality they turn out to be nothing.  You just can't tell someone that at the time.”

For O’Grady, who admits she’s not an avid viewer of her work, Identity Theft of a Cheerleader is the exception.  “This one I have marked on my calendar,” she said.  “I called everyone a week ago and told them to watch because I felt pretty confident about it.  The title alone is so much fun that I had to make the call.”

Just don’t expect a viewing party.  “I hosted [one] for an episode of Matlock I did, one of my first jobs.  It gave me a stomachache, so I thought, ‘I'll never do this again,’” she laughed.

O’Grady recently had discussions about working with Lifetime in a creative/development capacity, something she describes as, “a new space for me.”  She also recently wrapped the 15th and final season of CBS’ Criminal Minds (to air next year).  “That was tough,” she said in closing.  “A lot tougher for the cast that had been there for 14 years, but as a recent addition, it was still sad as they were such a tight family.  My first job in Hollywood was with Joe Mantegna, and we worked together again over the years, so when he called me to come in and play his ex-wife (now his wife), I jumped at the chance.  I love Joe!”

Identity Theft of a Cheerleader will be telecast Saturday, September 7 at 8 p.m. on Lifetime.