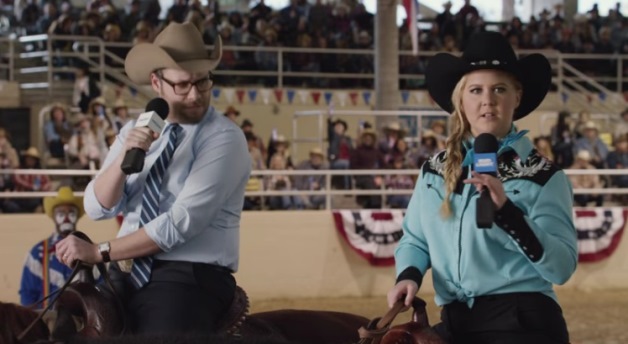 This is a weekly blog focused on gender equality. In this column, Bud Light takes a stand for gender equality, Facebook struggles to close its diversity gap, concerns about the future of young men in England and more.

Bud Light says only beer bottles need labels. In its newest ad spot, a continuation of their "Bud Light Party" campaign that mocks the election, Seth Rogen and Amy Schumer (pictured above) stand behind a podium and take a stance on gender equality. "It's a party for everyone -- men, women, people of all genders," Rogen declares. Schumer adds, "Gender identity: It's really a spectrum, and we don't need these labels!" "Beer should have labels, not people," the pair concludes. "When a brand like Bud Light shows support for the transgender community, it makes a difference," said Nick Adams, GLAAD's Global Director of Transgender Media. "Not only does it help bring more visibility to the trans community, it also inspires other companies to do more to show their support." Watch the ad below.

It's no secret that Silicon Valley vastly underrepresents women and people of color, and some companies have taken the lead in trying to diversify their workforce. Two years ago, Facebook was one of the first companies to provide incentives to their recruiters who brought in diverse candidates -- awarding points that translate to larger bonuses -- the Wall Street Journal reports in an in-depth article on the efforts. However, even with incentives, the tech company's consistency has barely changed; within two years, the number of Hispanic and black employees stayed the same, and women made up 33% of the global workforce, up by only 2%. "All of us are lost with diversity," a former Facebook recruiter told the Wall Street Journal. "We're all rushing and sprinting to get diversity numbers higher and higher than other companies. It's become a competitive number." This report comes after Facebook took heat last month for claiming that there weren't enough qualified candidates to fill their diversity goals. Read the full article here.

The sexist Olympic coverage continues. Last Sunday night, Andy Murray secured a consecutive gold medal in the men's tennis finals. In his post-game interview, however, he had to remind BBC presenter John Inverdale, that he is not, in fact, the first person to accomplish this feat, NPR reports. Inverdale asked, "You're the first person ever to win two Olympic tennis gold medals. That's an extraordinary feat, isn't it?" Murray noted that he is the first to defend the singles title, but retorted with a smile, "I think Venus and Serena have about four [gold medals] each." The Williams sisters each hold one gold medal from a singles event and three from doubles. This is not the first time that Inverdale has been criticized for comments on women's tennis. In 2013, he suggested that French player Marion Bartoli worked harder than others because she was "never going to be a looker." For a roundup of Murray's interview and other sexist coverage this Olympics, check out the video below.

Why Aren't Men Going to College?

In the UK, the gender gap between men and women going to university is the widest on record, and young women are 36% more likely to apply than young men, the BBC reports. Some educators, like Mary Curnock Cook, chief executive of the University and College Admissions Service, are calling for a national effort out of concern for the future of young men. If the trend continues, the gender gap will be larger than the income gap between students, she noted. Why is this happening? According to a study from the University of Bristol, boys are twice as likely to fall behind even before they start school. Research shows that boys also spend less time on homework than girls and are more likely to choose playing video games over reading. "If this differential growth carries on unchecked, then girls born this year will be 75% more likely to go to university than their male peers," Curnock Cook told the BBC.

American Women are Dominating the Games, and It Didn't Happen by Accident

Why Boys Need to Have Conversations About Emotional Intimacy in Classrooms