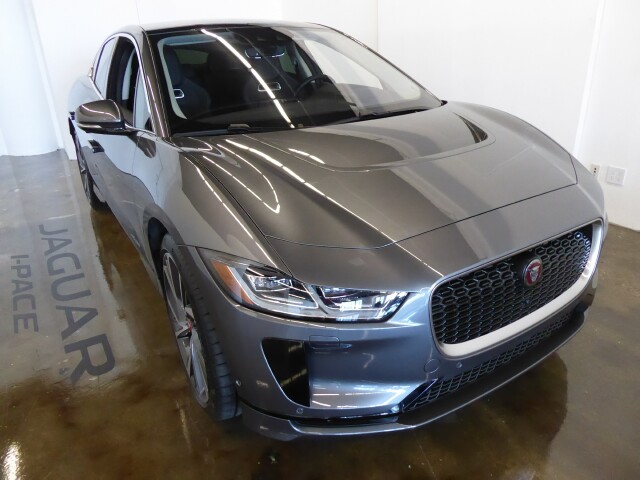 New York City -- The old adage “Race on Sunday, Sell on Monday” works only when consumers can see something like those track cars actually in the showrooms.  That concept -- the whole basis of NASCAR, in fact -- has pretty much disappeared as racers have evolved past the point of recognizability.

Jaguar wants to change that.  Just as McLaren conducts its Customer Racing Program (allowing owners to track their own cars, or McLaren-prepared race-ready examples), Jaguar is putting its production cars into competition with all-I-Pace events that run in conjunction with Formula E, the fast-growing electric race series that runs purpose-built electric vehicles (EVs).

Jaguar was the first automaker to take part in Formula E, but now it also involves Mercedes, BMW, Porsche, Audi and Nissan.  eTrophy was announced in 2017 and is the first official support series for Formula E.  The races take place on the same weekends, and on the same tracks, as Formula E.

The eTrophy cars have big rear wings and all the usual race decals, but under the skin they’re not much different from production I-Paces.  (an I-Pace is pictured at top.)  The weight, around 4,500 pounds, is basically the same.  The interiors come out, but roll cages and other safety gear go in.

On June 13, MediaVillage took part in an exclusive media lunch with Jaguar and Bryan Sellers (pictured below), a winning professional driver in the ABB FIA Formula eTrophy Championship, which puts 20 identical production-based Jaguar I-Pace electric cars (prepared by Jaguar’s Special Vehicle Operations team) in head-to-head competition around the world.  There are 10 races, in such cities as Berlin, Paris, Hong Kong, Sanya (China), Monaco and Diriya (Saudi Arabia), finishing up in Brooklyn, New York July 13-14.  With the cars the same, driver skill is paramount. 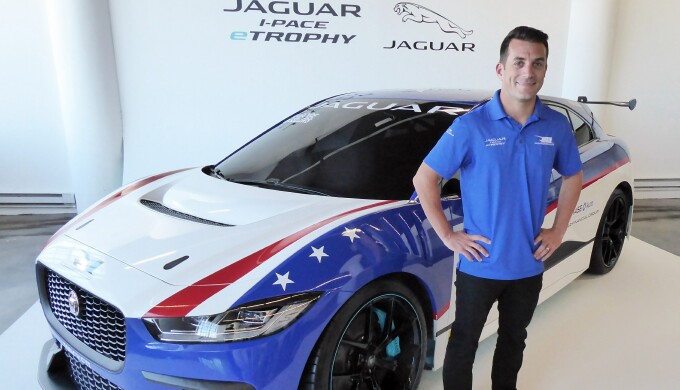 Sellers is currently the No. 2 driver in the series, with all podium (first, second or third) places in previous races, except for Berlin, where he placed fourth.  (He said his Rahal team “tried some new things, but they didn’t work.”)  The racing is a bit different.  Sellers said he has to use strategy about when to expend battery power -- a bit different from worrying about running out of gas.  Indeed, although his previous racing experience was in gas-powered sports cars such as the Porsche 911 GT3, he is convinced that the eTrophy series can sell buyers on the I-Pace, because it worked for him.  “I’m a big believer in electric cars now,” he said.  “This car totally changed my mind.  I used to think that internal combustion was as good as it gets, that electric vehicles would ruin our sport, but I couldn’t think more differently now.  I want to buy an I-Pace.  I wish I had one now.”

Sellers sees electric vehicles as the future of the industry, and as emissions regulations tighten in Europe and automakers such as Volvo announce fully electrified lineups, it’s hard to argue with that conclusion. But consumers haven’t caught up.  Sales are still relatively small – a mere 361,000 (including plug-in hybrids) in the U.S. last year.  Dealers don’t push EVs, and a recent Sierra Club investigation found many down-playing their own products, or making excuses (“we lost the keys”; “they’re not charged up”) in response to queries about EV test drives.

But Jaguar is serious about selling the I-Pace, which moved 1,073 units in the U.S. through May of this year.  The I-Pace ($69,850) is both a long-range electric cruiser and a good off-roader (sharing technology with partner Land Rover).  It’s fast -- zero to 60 mph in 4.8 seconds, with a top speed of 155 mph.  It has a range of 234 miles.  I test drove one last week and found it great fun -- especially the regenerative braking which enables virtual one-pedal driving and really helps extend range.

“This [eTrophy] series is getting so much good feedback,” said Taylor Hoel, public relations and communications manager for Jaguar Land Rover North America.  “Because these EV racers are based closely on the production cars, it shows buyers they can get great performance out of their street vehicles.”

“There’s no better test of a car than taking it racing,” Sellers said.  “Formula E is great, but [because the cars don’t look like production vehicles] it’s not super-relatable.  This series changes the public perception of what electrics can do, and it showcases a car that can be the savior of Jaguar.”

Maria Rodriguez, Jaguar’s product communications coordinator, pointed out that the company is taking what it learns from the eTrophy series and using it to build a better I-Pace.  “It’s all about range,” she said.  “Can we build an electric car that can go 600 miles on a charge?”

If Jaguar could do that, it would take away one of the big hesitations buyers have about electric cars.  And that’s one more reason to head to the showrooms--along with the chance to purchase a car they saw racing on TV.