Getting the Scoop on Pop Culture Reporters: Lunch at Michael's with Page Six TV 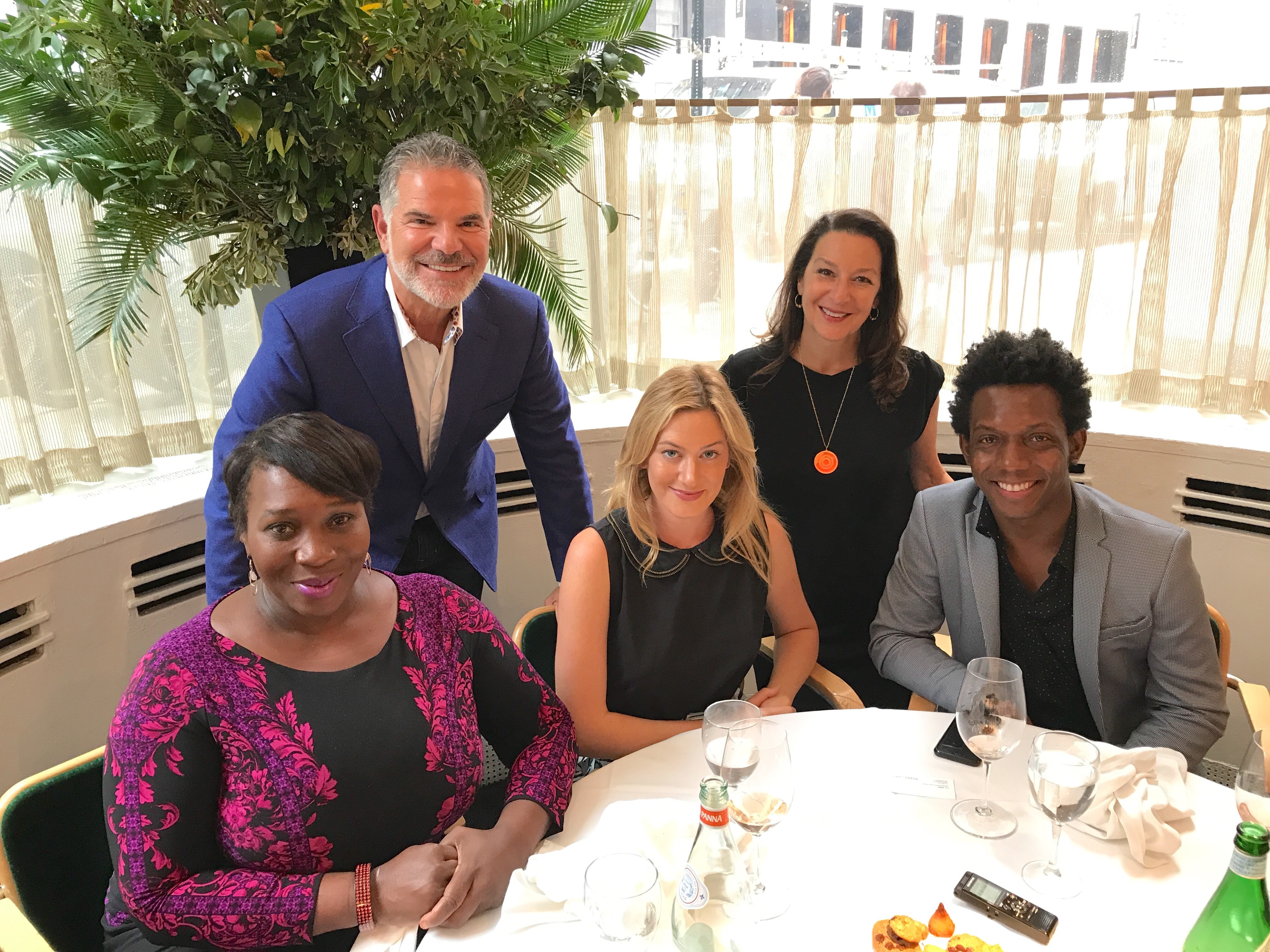 There's a saying on Broadway that a "bad dress rehearsal means a good show"; you got the bad stuff out of the way.  You also send good wishes by saying "break a leg."  If superstitions hold true, Page Six TV will be a huge hit.  Just a week before its nationally TV syndicated premiere on September 18th, one contributor, Bevy Smith, sprained her ankle doing a mock catwalk strut at a dinner event (yes, there's a juicy story there), while another, Carlos Greer, ended up in the hospital after tanking the landing off a water slide during a press junket pit stop at the Minnesota State Fair. It's almost the stuff of the gossip rags.  Oh wait, it is!  But, it couldn't have happened to a nicer team of on-camera reporters.

Offering a fresh approach to an old tradition, Bevy, Carlos, fellow contributor Elizabeth Wagmeister and host John Fugelsang will be the main faces on the multi-platform extension of the New York Post's legendary gossip column, Page Six. Carlos, showing a cellphone photo of his pain-med contorted face taken in the ER, said his mugshot-like expression was "worthy of a cover of National Enquirer." That is where all similarity to the sensational stops.  Page Six TV will cover pop culture -- including trends in politics, real estate, sports and even technology -- but through a smart lens of entertainment and comedy.

Over lunch at Michael's restaurant, Jack Myers and I learned about the diversity and distinction of this group and their shared goal for making this show stand out from the usual fare of celebrity scoop.

What began in 1977 as the destination for the paper's gossip, the Page Six column has not only been credited with breaking stories of national interest, but has been the subject of stories itself.  It has also helped the Post keep selling papers.  (Michael's owner, Michael McCarty, stopped by Table 1 to congratulate the team on taking his favorite print column to screen, letting them know that he happily pays dearly to make sure his beloved paper is delivered to his mountain home in the Southwest.) The video version's multi-faceted, multi-generational contributors will deliver content with a point of view, and "connect the dots" for viewers and readers based on their unique access points -- all as reporters and some as performers themselves.  Most important?  As Bevy explained, they will report "not just from outside on the red carpet.  We'll be in the room where it happens."

Bevy's twisted ankle backstory took place at one of her trademark events, "Dinner with Bevy," where the fashionista turned talker helps connect boldface names with each other -- and often with brands. The evening in question included Tituss Burgess and Dascha Polanco challenging their host to show her best strut. It ended with one of Bevy's six-inch heels caught in the hem of her gown.  But she didn't stay down for long. Even as a relative "unknown," Bevy actually turned down a slot on a Tim Gunn vehicle for creative reasons. An impressed Andy Cohen championed Bev, putting her forward for Bravo's late-night show, Fashion Queens.  Her infectious upbeat style on-air and in person is matched with a mama bear role off-camera, praising "Little Carlos" like a son, or evangelizing Elizabeth's talents and fast trajectory.

Petite, blonde Elizabeth, who is a journalist for Variety and just moved to New York City last week, may appear to need protection, but one listen to her recent rat-a-tat-tat interview with Tyra Banks for a Variety podcast, or seeing her confident critiques as a guest commentator on Entertainment Tonight, and the guise is gone.  Despite a childhood in the epicenter of reality-TV town, Calabasas, Elizabeth has, according to Bevy, "no fluff to her. She's incredibly accomplished -- and does the work. I just adore her."

That work ethic certainly fast-tracked Elizabeth's accomplishments. Elizabeth landed an internship at Fox11, the local Los Angeles affiliate and after being enthralled by the station's Good Day LA entertainment coverage, she found the nerve to approach a senior executive who agreed to shift her internship -- and ultimately her career track -- to that show. 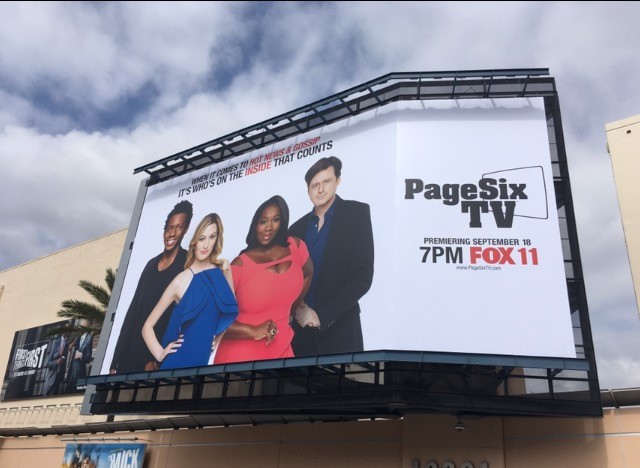 She has come full circle as this 20th Television distributed program gained 98% U.S. coverage at launch, including Fox 11 and 15 other major Fox markets.

Another unexpected win was an internship with the Association of Magazine Editors and a stint at TV Guide Magazine, giving her print journalism experience. "That's when I learned that I loved to write," she said. It was that combination of television and print that secured her next steps, including Senior Entertainment Editor at Bonnie Fuller's HollywoodLife.com while racking up YouTube views and a solid reputation for her commentaries from various red carpets.

Carlos, the only team member who joins as an actual reporter from the publishing side of Page Six, had a clearer destination in mind:  He was determined to make it in New York from the start versus trying to work his way up from small markets like his hometown near St. Louis. This motivated a transfer from Syracuse University to Marymount Manhattan College and an internship at J. Walter Thompson. Exposure to their client VH1 fueled his love of the music industry.  He honed his entertainment beat chops with a first job at Entertainment Tonight.  But a work ethic like Elizabeth's also paid off: At his next job with People magazine he volunteered to tackle the then little-appreciated video side content. He wound up creating their first digital foray, Inside Scoop, and also gained invaluable experience.

Elizabeth described the essential value of that cross-platform experience for them all: "Having a foundation as a writer and journalist, and then to have an on-camera presence, is so important, especially now [because] audiences are too smart.  They don't just want a talking head -- someone who smiles and has pearly white teeth. They want something authentic. And that's what this show is."

John Fugelsang, who maintains a presence on the comedy circuit, wasn't able to join the lunch also recently compared his show's talent to "the fabulous Hollywood-based shows where everyone is tan and smiling a little too much. We all like to wear black and chain smoke." Comic hyperbole aside, this is not your grandmother's gossip show. The team may not dress and act as street-tough as John quips, but they all adore New York and take pride in Page Six TV being the only pop culture show to be produced in the home town of the Post. Additional points of differentiation are less publicity-driven content from the studios and more of the journalistic "story behind the story" coverage, with John's comedic background smoothing the edges.

The camaraderie of this crew is clear: perhaps without even being cognizant of doing it even at a casual lunch, they naturally "toss" to each other. Elizabeth punts the focus to Bevy, the only native New Yorker, encouraging her to talk about her impressive background in, as it turns out, the ad sales side of the business.

Not surprisingly, Bevy dreamed big from an early age. She credits her comfort in navigating the Big Apple (and likely the fashion world) to her parents orchestrating regular excursions from her Harlem neighborhood to midtown, exposing her to everything from Broadway shows to Bergdorf's for Easter shopping excursions. "They didn't want us to become victims of the street, so growing up my playground was Central Park...the opera, theater. They made us understand that Harlem was part of Manhattan and Manhattan was where it all happened, so we were already couched for success."  She recognized early on that "You could take a train three stops and be smack dab in middle of the universe and therefore you could make anything happen in life."

Having earned ad executive VP stripes by the age of 28, Bevy described her next "playground" as New York's upscale dining circuit. "And you'll appreciate this," she said to Jack. "My inspiration was Darren Stevens on Bewitched who was in advertising...And Mary Richards on The Mary Tyler Moore Show," making it as a single woman in media and the big city.

"The way I was raised gave me a diverse and broad outlook of what the world is, so I was never cowed or intimidated to maybe be the only black person in the room. You're just, 'Hey, friend.' And you rise to the occasion."  Drawing Carlos in, Bevy added, "I think that's something Carlos shared as well, having to contend with not being in a very diverse school, but his parents groomed him for what he went on to do later."

"Absolutely," Carlos agreed. "My family made it very clear to be independent, be yourself, and my grandmother would constantly say, 'Don't put can't in your vocabulary.' Be curious about everyone, and just be accepting of everyone."

Bevy's own "can do" showed up when she got a job as a receptionist. "That was Peter Rogers Associates, which was hallowed ground, a venerated ad agency, and I cut my teeth there! Imagine me, with stars in my eyes, being the front desk of that agency. I was 'the host'!'"

When Jack commented that he had never heard of a receptionist being described that way, Elizabeth beamed: "That's the lens of Bevy! She makes the best of every situation!"

As close as they are, the contributors' differences are clear, too.  Bevy is the master of the social scene, while Elizabeth navigates social media like only a digital native can. Carlos, the more reticent to share on social media, describes his preference to find news there rather than be the news.  "I like to be in the moment and be present," he said.  "Don't get me wrong.  I'm always on it, and that's where I get information, but I don't necessarily like to overshare."

Like their "separate but equal" interests, they share distinct passions for causes -- each clearly sparked by personal experience and early influences.  The banter turned serious when Bevy described the need for inner city children to gain exposure to the arts and is an ardent supporter of Cool Culture. Elizabeth, whose role model mom is an educator, has volunteered with special needs students and is particularly focused on women-helping-women organizations. Carlos, clearly moved with the turn in the conversation, said he supports both counseling for at risk LGBT youth and cancer research -- stemming in part from the loss of his optimist grandmother.

This being the age of multi-tasking, Carlos will keep producing for the Post's print side, Elizabeth will use insights gained from doing a Variety podcast or cover story to add authority to her Page Six stories, and Bevy and John will continue their radio shows. Keeping their day jobs gives this team the edge, the perspectives, and even the celebrity access that makes them trusted reporters with solid sources, communicating the inside scoop with a twist. The proof? Page Six TV debuted Monday with the highest overnight rating of any similar show launch since TMZ premiered in 2007.

Photo in center by Ed Martin.