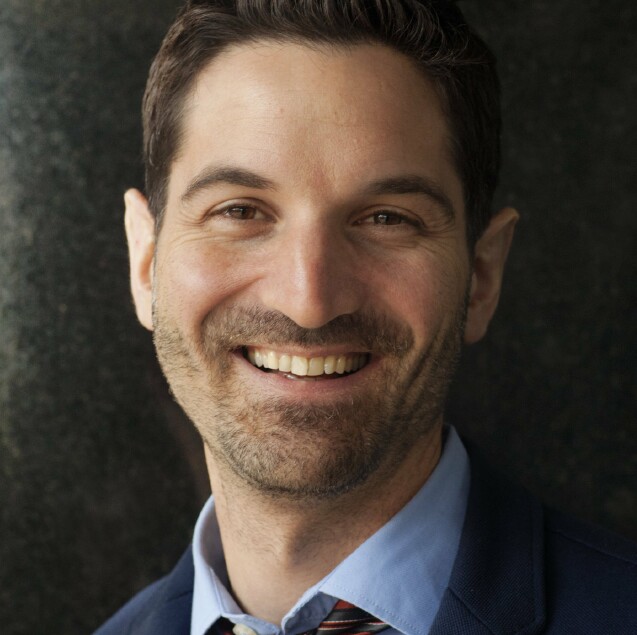 It would be easy to feel intimidated about a dinner conversation with Guy Raz, host and editorial director of the “TED Radio Hour” and winner of the Edward R. Murrow and Daniel Schorr awards for journalism. You could compare where you were at 25 (singing waitress) to where Raz was (covering Eastern Europe and the Balkans as NPR's Berlin bureau chief). You could let yourself dwell on the fact that he has interviewed everyone from Al Gore to Mark Zuckerberg to, yes, even Taylor Swift. You just have to shake it off … and remind yourself that this is also a man whose bio lists as his favorite role the narrator of “The Cat and the Hat” at his kid’s school and as his favorite pastimes cycling and pickling vegetables. And since Raz knows better than most that the best interviews are conversations – after conducting 6,000 of them – he helps his guests along, at dinner or on-air.

The man who has interviewed some of the greatest talent in Technology, Entertainment and Design (yup…“TED”) is surprisingly accessible, from describing his love of being “Mr. Mom” to his two sons for much of the week, to his unabashed admiration for Ira Glass, whom he describes as the “Papa Smurf” to all podcasters who came since.

He works to make the illustrious TED talks equally accessible. In one episode, Raz welcomes Sting to a “TED Radio Hour” podcast. Then, with what feels like a private aside to the audience he adds, “Yup … Sting!” It’s a subtle moment that lets listeners know he’s equally awed, and also encompasses both the nature of podcasts and the manner of Raz himself: personal, and humanized.

Humanness is the very DNA of the “TED Radio Hour.” And the human appeal has helped secure its basically evergreen spot on the list of most popular podcasts.

“The show is supposed to be a gathering place for us all,” Raz explains. “Our show is about the human identity. It’s for, basically, all homo sapiens. Identity is more and more a focus for people.”

Raz is pleased that he personally has cross-generational appeal beyond the expected public radio base of Boomers. His Gen X peers and Millennials are comprising more and more of the podcasting base audience, increasing their appeal to advertisers.  Raz is even more pleased that his baby, “TED Radio Hour,” is succeeding in its goal of reaching a wide swath of, well, humans. He believes in the power of audio to impact change, heavily influenced by Glass as well Dave Isay, the MacArthur Fellow who helped shape how we tell audio stories today by founding StoryCorps and “audio selfies.”

In a podcast featuring Isay on the act of listening, Raz’s intro seduces us with claims that hearing a story about those from different backgrounds has the “tremendous potential to build bridges of understanding between people.” He says that when we take the time to listen to stories of “people and places that are almost never heard, listening is an act of generosity and also a path to discovery.”

Raz’s intellectual curiosity is contagious. We can’t help but want to know more and he subtly manipulates our curiosity thru his own enthusiasm and thru production qualities.

After a sponsor pre-roll message, “TED Radio Hour” podcasts launch with one word from the genial voice of the host. Raz comes in with the word “This …” -- followed by some techy music, sound effects and the sounds of conversation filling a pregnant pause before he adds, “… is the “TED Radio Hour” … ground breaking TED talks … adapted for radio.”

It’s not a high drama tactic, like organ swells in a whodunit radio drama. But it’s another of the production values that Raz added when he took over in 2013, designed to keep the audience leaning forward and listening for more.  He and his team are masters of making months of work per episode -- triple scrutinizing and re-recording each line -- sound like spontaneous conversation.

When asked about the sort of folksy-intellectual “real person” voices that are practically a hallmark of public radio -- like the amused buddy voices of “How to Do Everything” or the gal pal style hosts of “Invisibilia” -- Raz acknowledges the craft. “There’s a little mythology to what we sound like,” he says. “With the ‘news/traffic/weather on the nines’ type staccato delivery [a la AM Radio], that’s not how people communicate. Just speak the way you speak!”

Just speaking conversationally is what adds to the perception of authenticity and the associated growth in both listeners and advertisers.  But, despite the greater than expected production effort behind it, Raz feels it’s genuine. “It’s true there’s a kind of earnest quality to public media,” he reflects. “But if that’s because it sounds like people love what they do it’s because it’s true.”  Apparently that is true since the “TRH” team of five has been together for a while.

Raz’s paternal streak extends beyond arranging play dates and packing lunches. He heaps praise on his small team, three of whom came to NPR as inexperienced interns. A few years later “they’re now more technically adept than me.” Perhaps technically, but Raz is a Papa Smurf in his own right and has passed along some prodigious learnings.

After starting as a NPR intern himself in ’97 he went on to capture audio as a newsman, covering everything from the killing of Osama bin Laden to the 2012 Presidential elections. At around that time he was also weekend host of “All Things Considered,” which he made into a “sandbox” where he could experiment during the lesser listening hours of Saturdays and Sundays, like “integrating music, which was not done, and creative ways of using sound.” Applying his news chops, Raz introduced the show’s now-signature "cover story." His elite journalism background helps attract sponsors, even within the mandated structure of ad messaging in public broadcasting.

And What Else Does the Future Hold?

While public broadcasting podcasts have a solid hold on most of the top ten most-downloaded positions on iTunes charts, there is plenty of competition up and coming from the commercial world. The most similar collection of content to the erudite public radio style probably comes from the Slate.com podcast division Panoply, with longtime shows like “The Gist” and Stephen Colbert-endorsed “Political Gabfest.” But Raz isn’t worried. He just hopes podcasting consumption keeps growing overall. “I want it to be four out of five people listening to podcasts instead of one out of five. It’s good for all of us.  Once that happens, it will be another space brands will be even more attracted to advertise in.”

Beyond that, how the world of audio will evolve among lightning fast media changes is anyone’s guess.  But the vision of a guy who interviews those leaders in tech, engineering and design is worth listening to. “Using our eyes and ears will not change, so audio will continue,” Raz assures us. Maybe audio will even have Augmented Reality additions.

But, Raz states, “It still comes down to how humans consume content. Maybe it’s delivered differently. Imagine a future where audio is more interactive, where you’re literally speaking to it and it talks back. But storytelling will still be there. The features may change. But our brains will still be the same. We need stories. We need connection. And that’s why the future of audio is so exciting.”