"Ghosts" Scares Up Laughs, Ratings and Raves on CBS 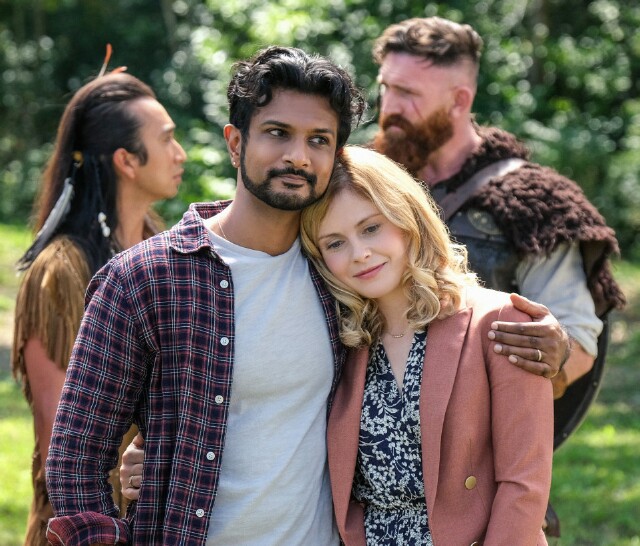 By now, it's no longer filching candy before costumed kids arrive, but nibbling leftovers. And, if you haven't ditched the jack-o-lantern yet, it is time; carved pumpkins wait for no one. The brain-eating zombies and chainsaw-brandishing lunatics are back on the shelves (please) until next year's leaves start to fall. But one network comedy continues to haunt Thursday nights. CBS' Ghosts was never just for Halloween.

Within a few weeks of premiering, Ghosts, ranking as the season's most-watched new comedy, was renewed for a full season. It began receiving critical acclaim over the summer, months before it premiered.

An unlikely gaggle of ghosts, traversing centuries and cultures, populate the house at the heart of this sitcom. Admittedly, the premise sounds creaky. A young couple, struggling a bit in Brooklyn, where Samantha (Rose McIver, pictured at top right) is a journalist and Jay (Utkarsh Ambudkar, top left) a chef, go see the 1800s-era country house she inherited. They intend to sell, but instead settle in, spending the sort of money few have when they take on an old house. 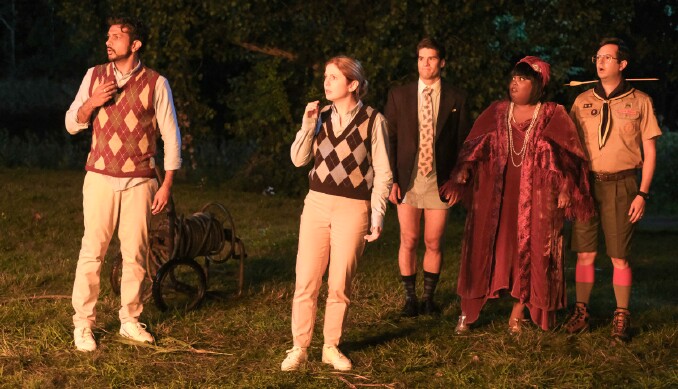 She can see and hear the ghosts, and Jay cannot. (This is established in the pilot after Samantha takes a tumble down the stairs, bashing her brain in the process, and wakes up seeing the deceased everywhere.)

As last week's episode revealed the ghosts, collectively a bossy bunch, despise Halloween. "All Hallows Eve belittles us and mocks our very existence," Isaac (Brandon Scott Jones), a colonial era soldier, complained. After all, they are ghosts every day … and some have been for centuries.

Isaac, who cannot wrap his mind around Hamilton having such a resurgence in popularity, and hints at gay longings, is a fully realized character. So is Hettie, the imperious woman who built the house and whom Rebecca Wisocky brings to life as someone whose outlook is tighter than her corset. 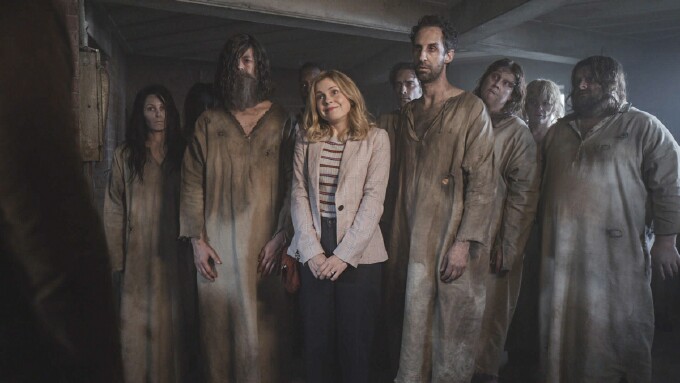 That's part of the appeal of the show, which is adapted from the popular British version. The characters all have – or, rather, had -- full lives. It's their deaths that have them gathered in this upstate house, the show's focal point.

"The location of the show is in the Hudson Valley of New York," executive producer Joe Wiseman said at a Television Critics Association press conference in response to a MediaVillage question. "And the pilot was shot in Los Angeles. It was shot at a house at USC. But then, when we went to series, it was decided to shoot in Montreal, which works out, because actually we're not that far from the Hudson Valley. And they painstakingly recreated this house on the stage. I've been on some amazing sets, but you walk into that stage and it's just incredible the detail that they've recreated and brought to it.

"We liked Upstate New York," he continued. "It seemed to be sort of rich in American history. We wanted a Viking character, and so we did some research. [Vikings] were in Canada. There is evidence, and actually journals that we found of them describing coming down the coast. They would go inland and explore. As soon as we figured that out, we're like ‘OK, we might as well set it here. That seems like a fun character to have running around." 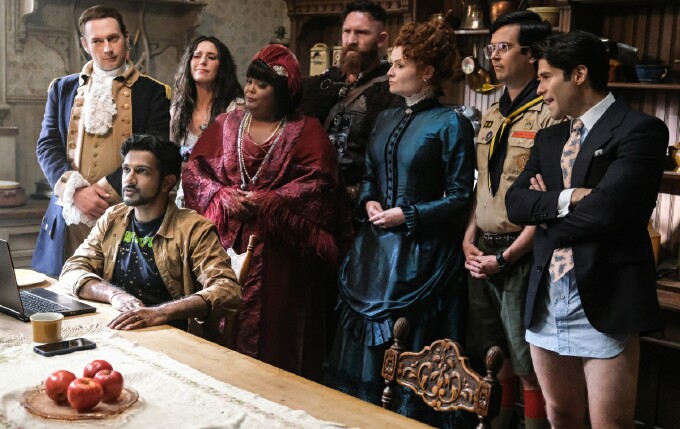 Wiseman was referring to Devan Chandler Long's character, a pillaging Viking named Thorfinn. He was front and center in an episode in which a Viking funeral did not go quite as planned. And in Thursday's episode, Thorfinn and Sasappis, a Native American (played by Román Zaragoza), get hooked binge watching a dopey dating reality show. It's then meets now, and it is done well.

Also, in Thursday's [Nov. 4] episode, Pete (Richie Moriarty), the perpetual boy scout, has his moment. He really is an overgrown scout (Ghosts is careful to not call him a Boy Scout), who embodied the good and bad of that. Felled by an arrow through the neck while teaching archery, Pete is so guileless it can be grating in an adult. But this is a man who proudly wears knee socks and shorts and possesses the innocence of a child in a 1950's sitcom.

For show consistently delivering jokes, Thursday's episode has a tear-jerking ending, but we're not spoiling it here.

As these disparate characters from history come together, they form a family, albeit one that could be a stranger mix than most. "It's a really sweet premise, and it's a really fun dysfunctional family show," Ambudkar told MediaVillage. "It was an opportunity to play a character that was grounded and loving and supportive and well-rounded. The British version of the show is so funny and witty. I'm having a really good time. Hopefully [it is] something people can watch as a family.

"There are not that many things on TV now that you can watch with mom, dad and grandma and grandpa and maybe 8-10-year-olds, and it moves at a fast pace," Ambudkar continued. "[It has] a little bit of pathos, some darkness and dry humor. It's a really nice departure from what a lot of people expect from CBS, [which] has developed a really nice rep from three-camera sitcoms."

Ghosts airs Thursdays at 9 p.m. ET on CBS and streams live and on demand on Paramount+.