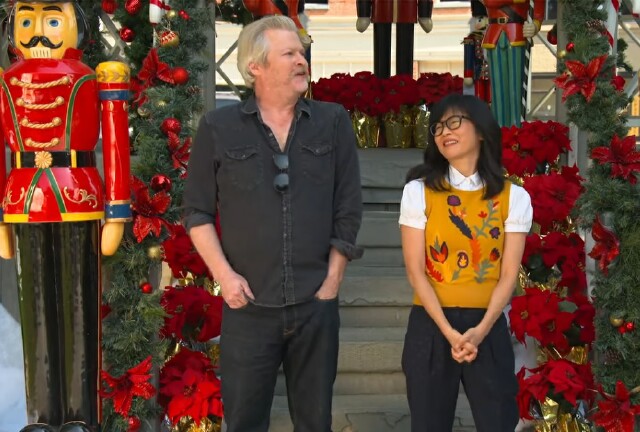 What's Thanksgiving week without UPtv's GilMORE the Merrier? Thanks to the network's annual programming event, beginning Monday, November 22, Gilmore Girls fans can once again dive into a seven-day binge-a-thon of all 153 episodes of the beloved series that ran on The WB (and later The CW) for seven seasons from 2000-2007. Additionally, UPtv is giving viewers a chance to revisit all four Gilmore Girls: A Year in the Life reunion movies later produced by Warner Bros. This year marks the sixth annual GilMORE event. It's the second for cast member Keiko Agena (Lane Kim), who is hosting for the second year. This time she is joined by Todd Lowe (Zack Van Gerbig), and they have some special treats in store. "It's fun to be back," Agena (pictured above with Lowe) said during a recent interview with MediaVillage. "If I remember correctly, the first time it was proposed to me it was to do something with Emily Kuroda (Mrs. Kim) and I thought, 'Well, of course. Why wouldn't I do something with her?' It was over Zoom, super casual and fun, and we were able to play with our rapport as Emily and Keiko that we [didn't] get to show as mother and daughter on the show. (Watch a preview of the binge-a-thon here.)

"Now I get to do it with Todd, who's a doll," she continued. "Todd's one of the people I got to spend time with off the set. Because he's a musician, I'd go see his shows. So, it was great getting back in touch with him and spending time recording this. It's definitely one of those things where it's a good excuse to get together." 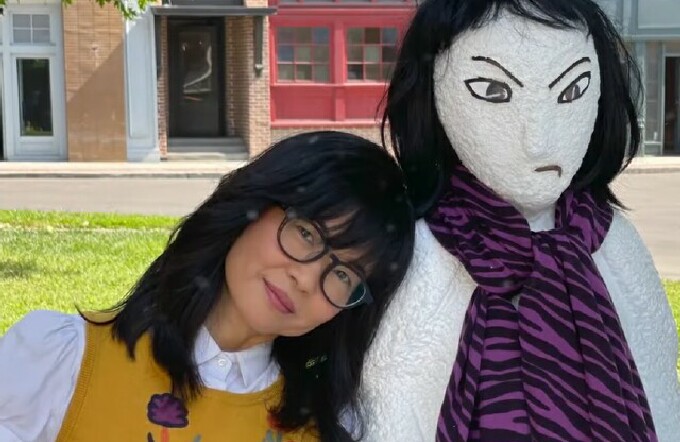 This year marked the show's 21st anniversary, and all these years later Agena is still taken aback by the fandom that surrounds the series to this day. "At the time we were on a smaller network," she shared. "I found a lot of people were more familiar with the show when it appeared on Netflix. Some had watched it [originally], but I think a lot of people found it after the fact. Certainly, that whole binge-able aspect happened with Netflix, and now with UPtv you get a different kind of experience because viewers can binge at the same time with people of the same community."

As a part of the GilMORE festivities this year Agena, along with Lowe, got to revisit some familiar territory that still resides on the Warner Bros. backlot. "Ah, the Stars Hollow-ed ground," she laughed, referring to the fictional Connecticut town in which the show is set. "I've been back to Warner Bros. since the show ended, but this was the first time I'd been back with prop pieces that were similar to what we had when we were filming. Just going back and having that little Luke's sign next to the coffee shop … that was really fun and so great. I mean, we spent seven years there, so we got to know that little corner of Warner's pretty well. Like stepping onto the gazebo again, it feels the same, which is really, really, cool."

Part of the fun Agena may try to avoid is the "watch and win trivia questions," While she was thrilled to have participated, trivia is just not her forte. "I'm terrible at it," she admitted. "I won't be giving clues, hints or answers to anything. I'm pretty bad. But we have some great fans in the Gilmore Girls universe who know a lot of detail. Also, there's a lot of episodes, so there's a lot of trivia."

Agena really appreciated the opportunity to revisit the four A Year in the Life movies she filmed in 2016. "That was a really great time," she recalled. "It had been so long since the show ended, and there was a real freshness in reuniting and a real sweetness in the fact that we could revisit these people at a different point in their lives. That whole experience was one where I got to spend a lot of time in gratitude for the whole thing. I think that was a similar vibe on the set for everyone. No one in the cast thought a reunion would happen. After it ended, every so often people would ask if we thought a reunion would happen? The answer was always 'no' because there was nothing in place for it. So, the fact it did happen was unexpected. A lot of that had to do with how passionate the fans are. If we didn't have the fans we have, it wouldn't have happened. That was really a testament to them."

When it comes to more Gilmore Girls, Agena says, "Never say never." However, her proudest part of being a member of the cast is something she still holds dear when approached about the series. "A lot of people come up to me and say that it was wonderful to see an Asian American girl on television," she shared in closing. "That I was one of the first people they saw on television who represented them and that's always a special thing to hear."