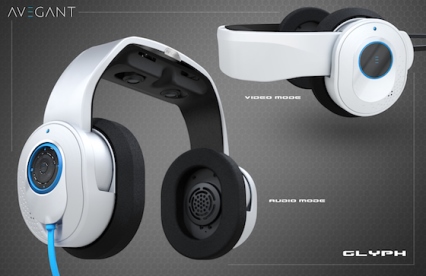 Wearable devices that offer audio and video have had one issue holding them back so far: traditional screens that are close to the eyes have resolution that ranges from mediocre to bad. But, Ann Arbor-based Avegant (www.avegant.com), the creator of Glyph, a new personal theater device, has solved the problem in a surprising way: they modeled their display on the workings of the human eye.

The display works by projecting images directly onto the wearer's retina. Each eye piece contains 1 million micro-mirrors and a low-power LED. The result is an extremely sharp image. The light is similar to natural light, so it does not cause eye strain in wearers.

The headset also features an innovative design: it can be worn as headphones, delivering high-fidelity audio. When the wearer wants to incorporate video, she simply pulls down the headband so that it covers her eyes. The headphones feature advanced noise cancelation, allowing the wearer to enjoy a distraction-free viewing experience. (See our earlier reports on Google Glass and Oculus Rift. Send your member's site password request here.)

The project, as more and more cutting-edge technologies are, is being funded through Kickstarter. Supporters who give $499 or more will receive a Glyph headset of their own in blue, black or white. The project is proving extremely popular. It took a mere four hours for the project to meet its $250,000 goal. As of this writing pledges have passed $1.2 million with two more weeks in the campaign. Among supporters, 1,860 have selected support levels that entitle them to the revolutionary headsets. You can watch the video and order your Glyph, due to be delivered in December, at http://kck.st/M4Zw9f 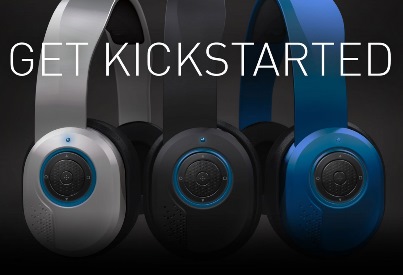 The project has been in the works for over two years. The first prototype was a coffee table-sized device you had to stick your head in in order to view images. The current physical alpha model is a wearable size. They are using the Kickstarter funds to create a beta that will be lighter and slimmer. The Glyph beta is expected to weight 16 ounces and provide WXGA video at a 120 Hz refresh rate.

Outside of the immersive experience, the Glyph has a number of advantages over current mobile video devices. The screen uses far less power than the one on a tablet or smart phone. Avegant CEO Edward Tang told International Business Times that the device will allow users to watch three hours of video without recharging. Plus, while digital screens on smart phones can be hard to see in bright light, the Glyph blocks out ambient light so that it can be used indoors or outdoors, no matter how bright or dark the environment.

The device is powered through a micro-USB and receives video through a standard HDMI cable. Wearers can stream movies from subscription services like Amazon Prime Video or Netflix through laptops, tablets or iPhones, or, watch videos that they already own. The device is also intended to create a fully immersive video gaming experience.

The creators have exciting ideas for the future of the Glyph, as well. They expect that film directors can use the device to create 360 degree immersive film experiences. In future models, they hope to incorporate chips that allow you to make phone calls directly from the headset and cameras so that you can film what is around you.

All of these, and the Glyph beta itself, are still in the future. While the Glyph, in its first incarnation, will not offer all of the utility of a device like Google Glass, its innovative display technology still makes this a device to watch.

If you are receiving this report, you are a registered member to MyersBizNet or are receiving it as part of a registered corporate membership. As a member, Jack responds personally to your e-mails, requests and comments. He is available to speak at your company events. In addition to Jack Myers Media Business Reports, your membership underwrites MediaBizBloggers.com, Women in Media Mentoring Initiative,Jack Myers Wall St. Report, Jack Myers Video Media Report, plus our exclusive industry economic forecasts, trend forecasts and corporate performance research. Re-distribution in any form, except among approved individuals within your company, is prohibited. As a member you have full access to all archives and reports at www.jackmyers.com. If you require your ID and password, contact maryann@jackmyers.com