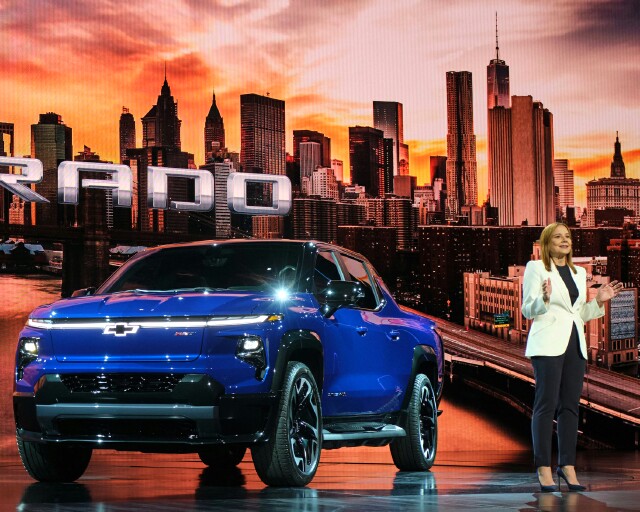 General Motors has transformed itself. From a company that once played it safe, GM is now at the head of the line when it comes to electrification, speed to the marketplace and technological innovation. And for the second year in a row, GM had one of the most compelling presentations at the Consumer Electronics Show.

Once again the presenter was Mary Barra (pictured at top), the first female head of a major auto company. Barra’s stage was in Detroit, not Las Vegas. GM joined many of the bigger tech companies in deciding to be virtual this year. But the offerings were no less compelling.

The big GM news at CES was the launch of its Chevrolet Silverado electric truck, which has been teased for the last year. We knew it would have a 400-mile range, but that’s about it. GM might have been blindsided by Ford’s announcement of a $40,000 F-150 Lightning, and so the price of its cheapest Silverado matches that exactly -- $39,990.

Actually, that version of the truck won’t have 400-mile range. The first one customers can actually buy is $105,000 and it’s a loaded First Edition with 400 miles, four-wheel steering, 17-inch diagonal infotainment, 10.2 kilowatts of power for workplaces, and other amenities. The upmarket RST version will (like the Hummer EVs) have a Wide Open Watts Mode that jumps power up to 664 horsepower and 780 pound-feet of torque -- good for zero-to-60 times of less than 4.5 seconds. There will also be Work Truck and Trail Boss versions we don’t know much about yet.

About the speed to market thing. At CES in 2021, GM announced a new division, BrightDrop, that would make “last-mile” electric delivery vans. It’s a compelling business proposition for the company, as major companies such as FedEx, Amazon and UPS green their operations -- and save money at the same time.

Initially, it appeared that the EV truck business would go to start-ups -- Ford bought a share of newcomer Rivian and Amazon placed a big order. Another startup, Bollinger, jumped into the fray.

But BrightDrop challenged the upstarts with its own truck, the EV600, and this year Barra was able to announce that FedEx had taken delivery of the first five (of 500). It’s a start, since FedEx Express operates 87,000 vehicles, but FedEx’s Richard Smith said that it will buy only electric after 2025, and 100 percent of the company’s deliveries will be electric by 2040. Smith also said that GM can meet two thirds of its delivery truck needs.

Walmart is also now a customer, said Doug McMillon, President and CEO of the big box retailer. Walmart plans to use the EV600 for its at-home delivery service, which is scheduled to expand from six to 30 million households. The EV600 goes 250 miles on a charge and can haul 2,200 pounds. (Stellantis, which will turn Chrysler into an all-electric brand by 2028, also is making electric delivery trucks, and Amazon is buying its Ram ProMasters. The deal was touted by Stelllantis CEO Carlos Tavares at CES, but no numbers were given.)

GM is plugging in as fast as it can. The company will spend $35 billion on electric and autonomous technology by 2035 and go carbon neutral by 2040. It also plans to deliver electric heavy-duty pickups by 2025 and is rolling out EV versions of the popular Blazer and Equinox SUVs (the latter priced at $30,000). Cadillac will get the Lyriq and Celestiq EVs. “Automaker to platform innovator” was one message that flashed behind Barra as she spoke.

Ultium batteries and EV platforms are GM’s way forward and will underpin the company as it aspires to be all electric by 2035. Complementing that is another frontier for GM -- what it calls the Ultifi platform. According to GM’s Scott Miller, vice president of the software-defined vehicle, it will allow owners to perform quick software upgrades, download apps, change the theme of their car based on mood, and have the windows roll up automatically if it rains.

Most of the industry is stalled on autonomy, finding it difficult to get past Level II (hands-free on the highway only). But Barra said at CES that the Celestiq would offer the UltraCruise autonomous system, enabling self-driving in 95 percent of scenarios. The system is said to have “the processing capability of several hundred personal computers,” but is the size of only two. Two big caveats right now are finding enough chips and the onboard electric power to run them. The current system, SuperCruise, will be on 22 GM models by 2023.

The luxurious Celestiq is supposed to come out this year as a 2023 model. That would imply that UltraCruise is past the test stage. But the system might be a late addition to the options list.

GM’s EV rollout hasn’t been seamless. It has had problems with battery fires in its Chevrolet Bolts, and it has had to recall 2017 to 2022 Bolts. But GM is still going full speed ahead on electrification and those Ultium battery platforms.