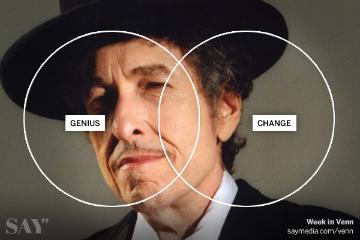 Online publishing, for all the technology it relies on, has been unusually slow to innovate when it comes to advertising. But, like Dylan said, the times they are a-changing. After years of being locked into publishing platforms that could only cope with Interactive Advertising Bureau (IAB) standards, new technology means publishers are starting to explore new formats. It's not been an easy ride. Developments like click-word models were very difficult to sell to publishers who faced vehement opposition from editorial staff. But if we go for another Bob reference, you'veGotta Serve Somebody nicely encapsulates the feeling that advertising serves advertisers and viewers, not editors.

Love them or loathe them, click-words are an interesting example of how (some) publishers are willing to take risks. Ad formats that are new to the user come with added curiosity value, and with curiosity comes investigation. Ironically, online advertising needs to work on its own advertising. When I speak to publishers, I don't talk about an expandable unit, I just show them Say Media's ad units, and demonstrate how cool they actually are.

Different forms of advertising that are more unusual are being embraced by publishers a lot more than they were in the past. Viewers like to see different, more visually exciting elements on a web page - which is hardly surprising given that they've largely been clicking on 68 by 468 pixel banners for the past 20 years. Ad units that don't fit the traditional models do really well.

Bringing It All Back Home
But innovative advertising is only as good as the viewers who can see it, and that's where audiences are key. A group that can benefit from this are local media publishers - they're the ones with strong community audiences. Larger national newspaper titles have spent the past five years struggling with paywalls - an issue that just doesn't exist in the local news landscape.

Paul Hood is Digital Director at Archant, one of the UK's largest independent media businesses, active in the fields of regional news, magazines and websites. He knows better than anyone that competition in the news media space that Archant operates in is particularly fierce. Using London as an example, there are at least five prominent news media brands dedicated to delivering news and sport information to a London-centric audience.

"Across the London region, Archant publishes 16 newspaper titles, each with its own website," he explains. "The question we asked ourselves was, 'How can we leverage our high-quality local coverage of London's biggest news and sport stories and bring them to a wider pan-London audience?' Our answer was to create a new, digital-only news media brand and focus on addressing the gap in the market."

"The result was London24.com: a London-centric news media proposition produced exclusively by knowledgeable, local, London-based journalists. Local freesheets do a great job of catering to the commuter – the top national and London news stories are well-packaged and presented to give a good overview. But there was no news media brand covering London from the local angle."

Slow Train Coming
In February 2011, London24.com was launched. Eighteen months later, it is No. 2 in the market and is on track to be profitable by 2013.

Local community based titles like London24.com represent the ultimate examples of how powerful the combination can be when you have engaging advertising built around relevant, compelling content. Engagement rates on regional UK press are close to 2.5 times the average.

What becomes obvious from this stat? Community and special interest sites are hotbeds of engagement, which is strong incentive for media owners in this space to focus on their core audiences and avoid the temptation to dilute their audience as they attempt to increase it with more middle-of-the-road content. An engaged community equals more passion – like the counterculture that originally embraced Dylan. At Say Media we call this Point-Of-View Publishing, and believe it's the key to success for the media companies of the future. It's important to keep up too, because like Dylan sang in '78, there's " No Time To Think".