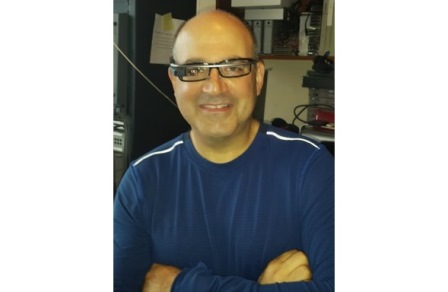 When I wear Google Glass, people tell me I look like one of the Borg -- a fictional alien collective, from the Star Trek franchise, comprised of cybernetically enhanced humanoid drones of multiple species that share a hive mind. Of course, I don't feel like a cybernetically enhanced humanoid drone, I feel like a regular human being who is lucky enough to get a sneak peek of the future of humanity and what the world will look like when it is inhabited by exo-digitally (or cybernetically) enhanced humans. Google Glass is more than just the ancestral DNA of convergence of wearable computing, life in a wireless cloud, and augmented reality tools... it is a way to think about what is possible as we evolve in our connected world.

Our smartphones are our go to devices for so many things... we've outsourced our memory to the apps that provide access to the body of knowledge of mankind such as Google, Wikipedia, IMDb, etc. We've outsourced our way-finding to maps and navigation systems. We've pushed just about everything we do to our phones. I've seen couples out to intimate dinners where both of them have their noses buried in their smartphones and not even looking at each other. It's not very romantic, but it is a fact of modern connected living.

Google Glass: The Future of Us

With a single tap, Glass can navigate me home. When I showed Glass off on Good Day Wake Up this week, Glass knew I was 11 minutes from my home and gave me step-by-step or turn-by-turn directions. A parlor trick or a paradigm shift? A parlor trick to be sure, but a great one!

If you've used Google Now, Google's personal assistant app available on Android, iOS and PC, you'll know how easy it is to find anything you need through speech. Glass takes that to the next level (and, for the record, so do the Motorola Droid handsets running Android 4.3 -- the new version of Android, 4.4 KitKat empowers this feature on any Android device). Glass is always listening, so saying, "OK Glass" gives me access to anything and everything the device can do immediately. Awesome!

If you prefer the tactile route, you can also cycle through Glass's functions by tapping. Tapping Glass shows me my latest e-mail. Another tap lets me take a picture. Unlike the Galaxy Gear smartwatch, Glass doesn't make a sound when you take a picture, making it somewhat creepy. Not only can I take a picture any time I want, but I can also take a ten-second video anytime I want. Glass lets you upload these pictures and videos to Facebook or Google Plus. This is going to inspire all kinds of conversations about when it's OK to record an image of someone. As you are probably aware, privacy is already a concern. Certain politicians have already weighed in, most without actually having used the product.

More Than Just a Heads-Up Display

Although Glass has an earbud, it also features a bone-inductive transducer that sits near your ear, which lets Glass talk to you silently. Even if you're standing next to the person wearing Glass, you won't hear what it is saying; the transducer vibrates the bones in the head, letting Glass read emails or text messages silently. Obviously, it has the sonic quality of a bonephone, so it's not my preferred method of experiencing sound, but it is very cool.

Wearing Glass isn't a low-key fashion statement by any means. But the way Glass acts is the complete opposite – from visuals to audio, everything is meant for me and me alone. There's no smartphone screen to bother fellow moviegoers at a theater. There's no speaker to annoy people sitting next to you. I get access to everything I want, but with a new set of social issues. People walking around in the real world wearing Google Glass are referred to as "Glassholes," probably for good reason.

It's Not Mainstream Yet…

Google recently launched its second generation of Google Glass. This generation is better than the previous one, just as the next will eclipse this one. But... the technology doesn't come without a steep price – it costs a minimum of $1,500 plus sales tax to own Glass and become a Google Glass Explorer.

When will it become commercially available? Certainly before the end of next year, perhaps even earlier. Is it commercially viable? Glass, in its current form, probably isn't a consumer product. However, the way it is improving, and the speed at which these kinds of tools are coming to market – you can bet Glass and things like it are going to be absolutely everywhere within two to three years.

Get ready – before you know it, these features will be in your prescription eyeglasses and fashion sunglasses and then, implanted into your eyes. Science fiction, no -- science fact. You may think I'm just some "glasshole" having a SciFi fantasy moment... maybe... but one thing I know for sure -- soon you will be too!