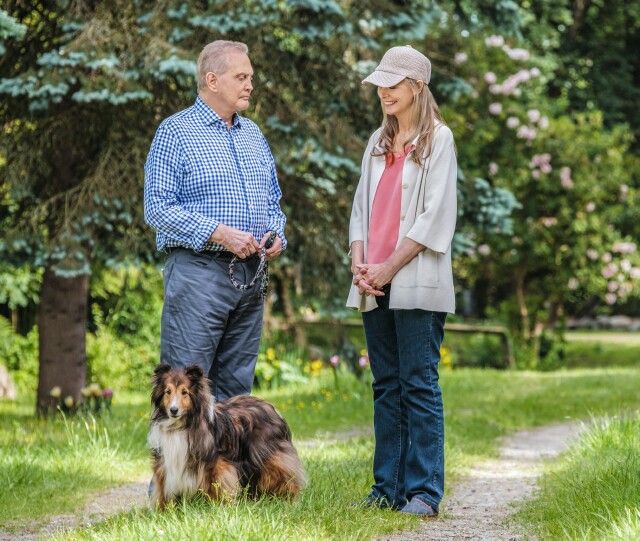 It will be a reunion of bionic proportions Saturday night when Hallmark Channel reunites the Bionic Woman, Lindsay Wagner, and the Six Million Dollar Man, Lee Majors, for the first time in 23 years with the premiere of the original movie Eat, Play, Love.  For Wagner, who spent three years (1975-78) playing cyborg Jaime Sommers, first as a guest star on Majors’ The Six Million Dollar Man (1974-78) and then on her own spin-off The Bionic Woman (1976-78) it was a role she couldn’t resist.  The casting, she told me, was cleverly choreographed.  “Lee and I share the same agent,” she explained.  “They approached us both at the same time, so it was a plan.  It was like, ‘Can we get these two together?’  It wasn’t an accident.  I laughed [when I heard].  Finally someone was putting us together!  It’s kind of a no-brainer for marketing and we were both kind of surprised it hadn’t happened before this.”

Although Max the Bionic Dog does not make a guest appearance, dogs do play an important part in the movie, in which Wagner and Majors play bionics-free widowed people looking to adopt the same dog.  “Yeah, there are some fun things in this movie,” Wagner laughed.  “And dogs and more dogs.  It’s a love story, and in the course of the film the young lead characters (Jen Lilley, Jason Cermak) play cupid to widowers played by Lee and myself.  So there are a lot of people getting together around animals that open everyone’s hearts.  It does send a message of hope and it’s sweet.”

Even more astounding is the fact 41 years have passed since Wagner’s Bionic Woman was spun-off from Majors’ immensely popular The Six Million Dollar Man into her own, now iconic, adventures.  And it is 40 years since she won the Emmy Award for Outstanding Lead Actress in a Drama Series, making her the first and only woman   “I know, it’s crazy!” Wagner said with a giggle.  “But there is no such thing as time.”

Wagner said there are many reasons why both characters are so revered to this day, the most important being the poignant time in history in which the shows first were telecast.  “Both technologically and culturally they were working on artificial limbs as something more than place-holders for visual purposes versus something that was revolutionary and might be a part of the body,” she recalled.  “Bionics were in research, so it wasn’t a total fantasy and that was fascinating to everyone as opposed to a robot or someone from another planet or the kinds of things that inspired humans to think of themselves beyond a limited impression of one’s self.

“In this case it was a person enhanced,” she added.  “So that was an attraction Lee’s character had.  Then to bring in a woman, which at this time was the beginning of the woman’s movement, for me it was more about a broader concept which we tried to bring into The Bionic Woman -- and from the feedback we’ve gotten over the years, we succeeded.”

According to Wagner that concept, while still trying to be entertaining, was to introduce feminine culture and feminine aspects while allowing her character to maintain strength and [a little] masculinity.  “Jaime was the first human woman in a family oriented show [who was] in a man’s position on an action show and that was shocking,” she explained.  “She was able to be powerful [opposite] the men that she met.  That was very much a breakthrough subject in those days and wouldn’t have happened in previous decades.

“Whenever possible I really wanted Jaime to not use her bionics to harm anyone, but rather to enhance her intelligence and [help her] think her way out of things,” she continued.  “An example would be, Jaime would push down a tree to stop a car chasing her, rather than chasing and bashing the guys, so they would end up hurting themselves with their own aggression.”

Despite not sharing a screen in over two decades, Wagner told me she and Majors have remained close and are still actively a part of each other’s lives. “We’ve done public appearances together, so it wasn’t like I hadn’t seen Lee for 20 years,” she said.  “Our families have all been together in different countries promoting DVD releases of the shows.  And sadly, yes, people often still think we are a couple.”