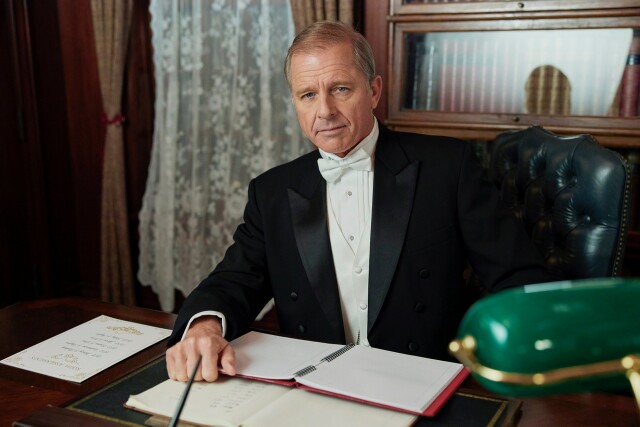 As Miles Colby, the rebellious son of Sable (Stephanie Beacham) and Jason Colby (Charlton Heston) in the 1985 ABC Dynasty spin-off The Colbys, actor Maxwell Caulfield was no stranger to having butlers or  the age-old art of buttling. For his latest project (and his first for Hallmark Channel), Butlers in Love, Caulfield lifts the cloche on the distinguished profession playing Charles Willoughby, a seasoned major-domo running his own prestigious butler academy, now imparting his invaluable experience to fledgling up-and-commers. However, Caulfield's introduction to the subject dates back to his formative years living in England. "I never had a butler," he laughed during an exclusive interview with MediaVillage. "But I watched Upstairs Downstairs (1971) when I was growing up there. It was very much [like] Downton Abbey.

"Scottish actor Gordon Jackson played the head butler on that show," he continued. "He was sort of the conduit between the upstairs and the staff downstairs. So, you got that kind of indoctrination growing up in England of the class system, and the whole business of deportment. There's an art to buttling. A butler has to fit into situations and look the part. You can't look like one of the guests, but you also have to look very much as though you belong there.

"The evening rises or falls on how well you conduct the proceedings," he added. "So, it was fun playing sort of a professor, for lack of a better term, and the real veteran experienced butler. The reason you're in this [acting] business is to play all walks of life. I've heard butlers described as gentlemen. The requirements for being a true butler are discretion, stoicism and ultimately a sense of pride derived from executing the task at hand expertly and willingly!"

While he wasn't too versed in the profession of buttling beforehand, Caulfield was familiar with Hallmark, largely because of his wife Juliet Mills. "I know the channel is wildly popular, particularly as a lot of my wife's friends and their daughters watch it," he shared. "They get a lot of pleasure from the stories, particularly over the last couple of years when everyone's felt so stressed, and the world's been stood on its head. It was nice to go back to some heartwarming romance."

While he wasn't specifically seeking a Hallmark project, he credits his time as a Colby for having the opportunity. "I have to give enormous credit to our producer Maura Dunbar," he said. "She had quite a hand in the whole evolution of Hallmark Channel. Her broadcast career dates back to ABC when she oversaw production of the 1991 Dynastyreunion. It blended the cast of Dynasty with some of The Colbys. I was lucky enough to be drafted for this all-star team. Heather Locklear had just done Don't Sweat the Small Stuff for Maura, who is a very loyal producer.

"Why I invoked Downton Abbey is because one of the things that qualified me to play this part, with which Maura very kindly gifted me, was she knew the fit was right," he added. "It wasn't just loyalty. She's a smart cookie, and it was pretty good casting, even if I say so myself. Playing a sort of pompous marionette, I still look decent in a tuxedo, and in my career, I've been lucky to be cast as a Richie Rich on occasion, so I get to wear the best clothes." 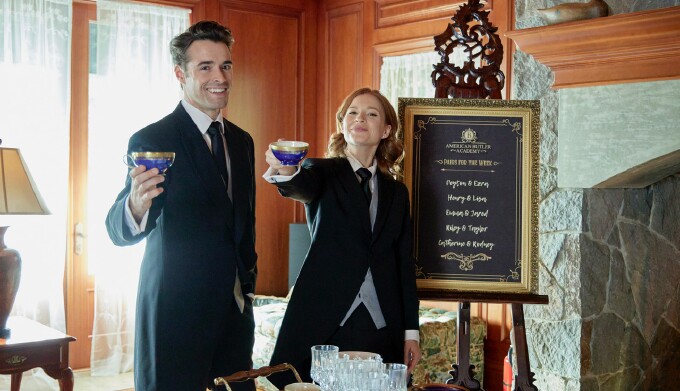 Caulfield admits to being thrilled by the "warm welcome" he received from Hallmark and to being impressed by his co-stars Corey Cott (above left) and Stacey Farber (above right), who portray Henry and Emma, the actual butlers in love. "Stacey started as a child actor," he said. "She could run circles around me and kept me on my toes. Then you have Corey just sort of gliding through it. He's wonderful, and I hope wonderful things are in store for him. They were both so funny."

Largely known for his roles as an American, it was also refreshing for the actor to use his real British accent -- something he hasn't done on screen since his role as Michael Carrington (no connection to the Dynasty family) in 1982's Grease 2. "That was very liberating," he laughed. "The only time I get to play Brits is on the stage. But even in the U.K. they think I'm an American, and I'm usually asked to play American bigshots."

Pondering his career, Caulfield reflects fondly on the projects that helped cement him as a fixture in Hollywood, and globally on the stage. "I recognize I've been very lucky in many regards," he said. "My wife and I recently celebrated our ruby anniversary, and this year marks the 40th anniversary of Grease 2. That was fun! I went from an English public school to living this American high school rock and roll fantasy opposite Michelle Pfeiffer, probably the most beautiful and luminous woman in Hollywood at the time.

"Then came The Colbys," he added. "You'll never get that caliber of a cast together again. I mean, Charlton Heston, Barbara Stanwyck, Katharine Ross, Stephanie Beacham, Ricardo Montalban … it was amazing. And then the person who sets the benchmark is Dame Joan Collins. Nobody has more zeal for the business. She's kind of a marvel. I'm lucky I got to meet an awful lot of people, either through my wife Juliet and her family, or just being lucky."

As for more Hallmark, Caulfield is all-in. "I did receive a very lovely note from production thanking me for my contribution to Butlers in Love," he shared in closing. "That made my day! I hope some of the best roles are still ahead and if I end up doing Hallmark movies for the rest of my life, I'll be a happy camper."

Butlers in Love will be telecast Saturday, January 29 at 8 p.m. on Hallmark Channel as part of its New Year New Movies programming event.