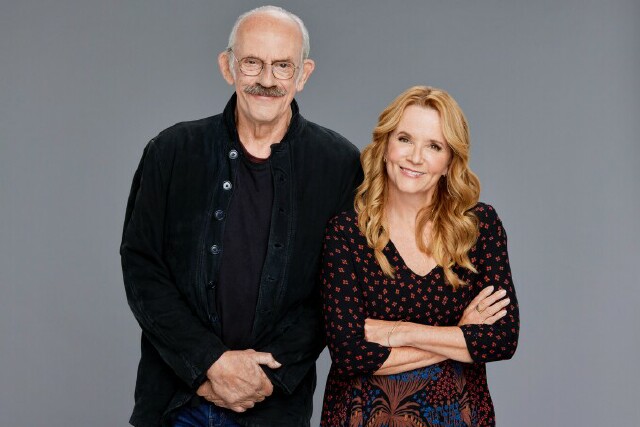 After a long absence, actress Lea Thompson returns to the Hallmark family this weekend in the premiere of Next Stop, Christmas, a part of Hallmark Channel's Countdown to Christmas programming event. Thompson's last Christmas outing for Hallmark was back in 2003 with Stealing Christmas (opposite Tony Danza and Betty White). She then experienced a long relationship with Hallmark Movies & Mysteries via her nine Jane Doe mystery movies from 2005-2008. Her absence from a yuletide project was something she needed to remedy. "I haven't done a Christmas movie in a very long time," she explained during an exclusive chat with MediaVillage. "So, it was time! I love the holidays, plus I have so many friends who love [these movies] and just live on them this time of the year. I thought, 'I better do one so they can see me,' because with everything, they haven't seen me in a while."

Next Stop, Christmas doesn't only reunite Thompson with Hallmark, it also sees her return to a film genre she is well versed in -- time traveling. The fact she's sharing the fun with her Back to the Future co-star Christopher Lloyd (Dr. Emmett "Doc" Brown) was no accident. "I think they were like, 'Oh, we got Chris Lloyd, let's get Lea Thompson'," she joked of the casting. "It seemed kind of like a shoo in, but I was happy to do it. I love the Hallmark family and I feel really grateful to them. I mostly make my living as a director, and [Hallmark] was the first to give me a directing job, so I'm very grateful for all the work I've been able to do on the Hallmark Channel.

"But with this one, it's such a strange thing," she continued. "This is the seventh movie I've done with Chris and maybe we've [said] one line to each other in all seven films. Of those movies, four took six months to shoot, so it's not like I was in and out. We've worked together probably a total of two-and-a-half years without [having] any lines together! But we did get to hang on this one and got some pictures together. I also get to see him at Comic Cons and the conventions we do together quite a bit, so I'm very close with him. It's always so nice to see him as I just love and adore him. He's a great actor and he's great in this part." 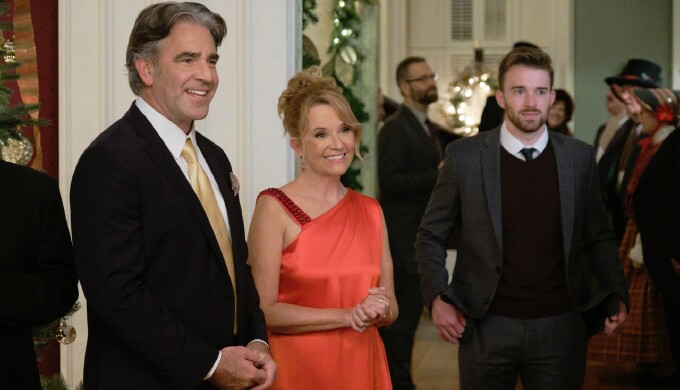 Lloyd plays a mystical ticket agent/train conductor who sells Angie (Lyndsy Fonseca) a ticket to board a train home for the holidays and possibly change her past. After waking up from a nap, Angie finds herself ten years in the past. Completely disoriented, she questions choices she made ten years ago -- the biggest, turning down her former fiancé's proposal. Adding to that is the fact she knows that ten years from now her parents Evelyn (Thompson) and Marty (Matt Walton) have split up, and if there is anything she can do to alter that outcome she's all in. Oh, and she also has to figure out how to get back to the present.

"I think [time travel] is fascinating," Thompson said of the film's theme. "We all wonder what it would be like. When I go home to Minnesota, I often wish I could snap my fingers, see what it looked like when I was a kid again, then snap my fingers and be back. I think that's why people love This Is Us so much -- because they go back and forward in time. I also just adored Lyndsy. I feel so lucky to have had so many wonderful people play my daughters. I have wonderful daughters, but I became a huge fan of hers doing this. It was also fun to play my character as a woman who has separated, then watching her relationship dissolve.

"Hallmark makes a lot of Christmas movies and I've read a lot of them," she added. "I thought this was one of the more superior scripts I'd read. It's funny, cute and heartfelt. It's also interesting as it deals with fertility issues and adoption, then parents dealing with whether you fall out of love after you've been together so long, and how do you fall back in love? That's an interesting story. I believe there's a lot of levels [here] for people of all ages."

Given her long association with cinematic time travel, the idea of changing the past given the chance is something Thompson's often asked about. "I'm of the school that everything happens for a reason," she shared. "I feel I've learned from all of my mistakes, and they've made me the person I am. Maybe if my career had been [different] I would've had less time with my kids. I might have broken up with my husband. That's why I think time travel and changing the past is always such an interesting idea."

One thing Thompson seems to have captured is the secret of eternal youth. While she laughingly attributes it to not changing her hairstyle, her advice for staying youthful is easy. "I try to hang around young people or different kinds of people and try to keep my mind open to new things and try new scary things," she said. "The other day I'd just finished directing an episode of Resident Alien, then flew home for a movie premiere, and sang and danced at a Cancer Coalition fundraiser.

"My microphone didn't work," she laughed in closing. "It was scary, I was tired, but it was for breast cancer, and important, and I did it! They raised over $1,000,000, so it's one of those things where even when I'm tired, I try new things and try to give back. I think that keeps you young."

Next Stop, Christmas will be telecast Saturday, November 6 at 8 p.m. on Hallmark Channel as part of their annual Countdown to Christmas programming event.