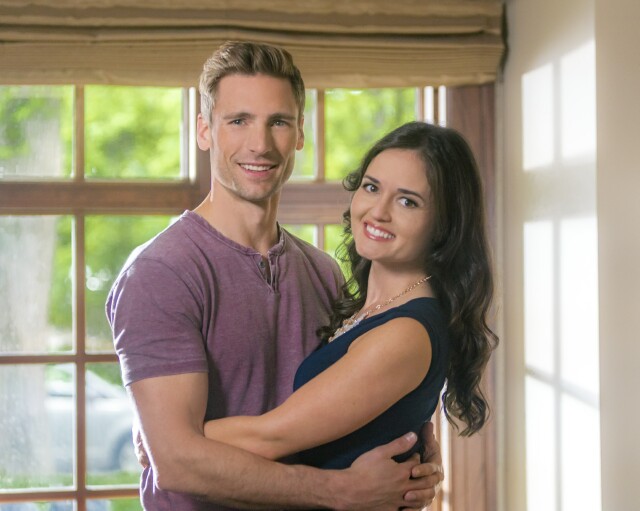 When Hallmark Channel favorite Andrew W. Walker teamed with the family friendly network it proved a win-win.  After starring in an array of projects for both Hallmark Channel and Hallmark Movies and Mysteries, beginning with 2012’s A Bride for Christmas, he credits Hallmark as the reason he continues to follow his passion -- acting.  Like many in Hallmark’s growing stable of talent, he’s also been afforded the opportunity to develop movies.  His first (based on his original idea), Love in Design, co-starring Danica McKellar, premieres this weekend.

Combining DIY and romance proved a perfect Hallmark fit. “I'm a huge fan of DIY shows," Walker revealed in an exclusive interview with MediaVillage.  "A friend of mine and I came up with the idea for this movie about two years ago.  He brought it to my attention and said, ‘How about a home and garden television concept?’  I was immediately intrigued.  We developed it some more, and here we are today!”

Walker stars as Jeff Winslow, a straight-laced architect appointed to oversee the renovation of one of his hometown’s historic buildings.  Enter Hannah McElroy, the bubbly host of Love in Design, a home renovation show assigned to modernize Lewisburg Manor into a B&B.  However, the building isn't the only thing with a history; Hannah and Jeff once dated and haven’t seen each other in three years.  With her "shiny, new, open spaces" view of things and Jeff’s love of “walls” the two are soon at loggerheads.  Following a visit from the head of the network, the decision is made that the show itself also needs a makeover.  Further, the former couple is the new show!

For Walker, it wasn’t just having his original idea developed that made Love in Design so special -- having McKellar by his side was the icing on the cake.  “I'm a huge fan of hers,” he revealed.  “The Wonder Years was a staple show for me growing up, so working with Winnie Cooper was like the greatest thing in the world.

“To be honest, she wasn't even on my radar as a possibility for the role,” he added.  “When I found out she was interested I immediately said, ‘This would be incredible!’  It's a pretty labor-intensive role for whoever was taking it because of the home and garden TV personality, then the real-life personality.  So, having someone that could really balance the two was so important.”

According to the actor, getting to know his new co-star was also easy. “Fortunately, Hallmark has a no a-hole policy so I'm usually working with great leads,” he joked.  “Danica was a special case.  I flew into Winnipeg from Vancouver on a Saturday after finishing Wedding March.  I texted Danica the next day to ask if she wanted to meet up and she invited me over to her hotel. I've had a lot of friends work with her, like my buddy Paul Green, so I'd heard how lovely and professional she is.

“After arriving she asked if I wanted to do a little exercise using face recognition,” he continued.  “I agreed, and we basically just stared at each other for 20 minutes and talked about the things we liked about each other and the things we were insecure about.  It was a great acting exercise and immediately broke down all the walls.  That Sunday was really important to us and after about four hours of reading scenes, by the end of the day we were really in stride.  It was such a great start to the project.”

In addition to his continued Hallmark star status, Walker and his wife Cassandra run Clover, a cold-pressed juice company based in Los Angeles.  According to the actor, had Hallmark not offered him A Bride for Christmas, Clover may have been his primary focus.  “We started the business around 2012 -- around the time I also got a call with an offer from Hallmark Channel,” he recalled.  “At that point I wasn't getting a lot of offers to do things.  I never thought of myself as an actor who was getting straight offers.”

Though he was unfamiliar with the network, Walker took a chance -- and the rest is history.  “It was a great experience and everything you could ever want in a film,” he shared.  “I didn't know if anything would come from it.  Clover had opened and I was prepared to take six months off from acting and focus on that.  But I kept getting these offers for Hallmark projects; to be really honest I don't know if I would still be acting if Hallmark hadn’t given me the opportunity.”

Walker hopes to be doing another project with Hallmark in the near future.  In the meantime, he can be seen on the big screen in God Bless the Broken Road.  “It's an amazing story and helps raise money for Blessavet -- an organization that sends veterans out to a movie and a dinner, allowing them to have an experience,” he revealed.  “It’s a beautiful movie.”

Love in Designwill be telecast Saturday, September 15 at 9 p.m. on Hallmark Channel.