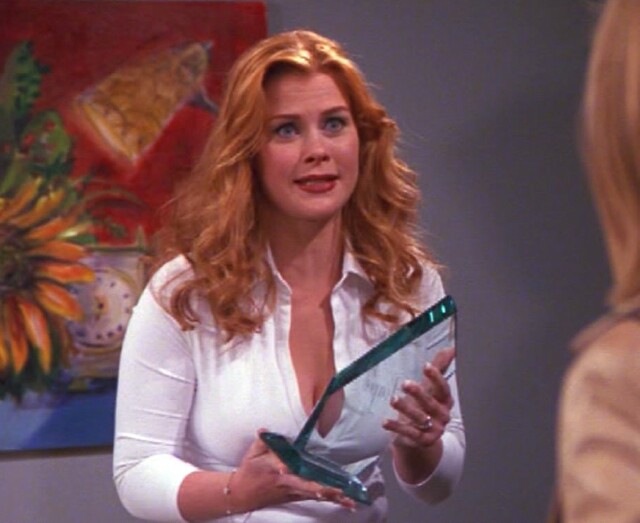 Hallmark Movies and Mysteries star Alison Sweeney (The Chronicle Mysteries) was already a household name, thanks to her day job on Days of Our Lives as Sami Brady, when in 2001 she added a being a Friend of Friends to her resume.  In season seven’s tenth episode (The One with Joey’s Award ), Sweeney appeared as fictional Days star Jessica Ashley, who was nominated for a Soapy Award but was unable to attend the gala ceremony.  She won the award for Best Supporting Actress and her then Days co-star Joey (Matt LeBlanc) gladly accepted the award on her behalf.  However, when Joey and Rachel (Jennifer Aniston) attempted to give it to Jessica, the daytime diva discarded it instead of placing it on her trophy shelf, choosing instead to save the space for “real awards.”  Thinking back on the experience during an exclusive interview with MediaVillage, Sweeney exclaimed, "That was super fun!  I can't believe it's been 15 years since Friends ended, and it’s insane that it’s 25 years since it began!  At the time I did it, the show was huge, and they were already syndicated.

“I’d been at Days for many years by that point,” she continued.  “We [at Days] were so excited when Joey got the storyline that he was on the show.  It was just so fun for us and we'd always watch [Friends] speculating what they’d do next.  They actually wrote some stuff that was parallel to what some of our actors were doing.  There was a Jim Reilly reference in there.  He wrote Days of Our Lives for many years, so we always loved the idea.”

According to Sweeny, her audition was easy.  “Well, it was basically me being me,” she laughed.  But getting the call to be a part of one of the biggest sitcoms at the time was another story.  “It really was just an honor to be included and be a part of something so huge in our popular culture -- then and now,” she said.  “To get that call to do the show and play a soap opera diva was so fun … and what an opportunity!  It was really exciting and completely different from anything I had done.  You kind of get used to what you do, so I walked onto that set thinking it was all versions of the same thing, but it wasn't at all.  I'd done some sitcom work when I was very young, but it was a quick wake-up call to how things were done and how particular they were about every single word.  I vividly remember the script supervisor prompting me on every detail.  I realized very quickly that comedy hinges on every single beat.” 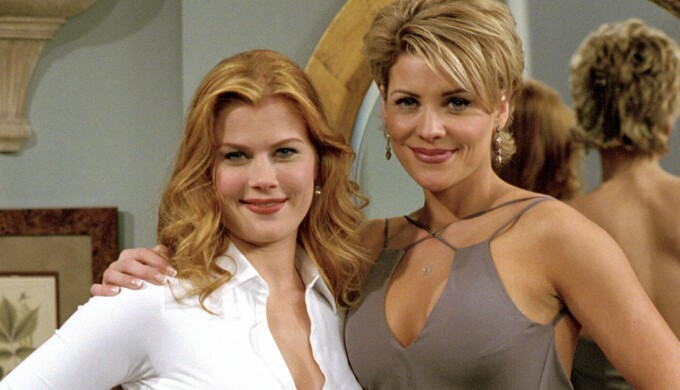 Sweeney also told me that being able to sit on the set and watch the writers try out jokes and make people laugh during rehearsals is one of her favorite memories of the experience.  “Just how precise and good they were at their jobs, at being funny and making those jokes work, the whole medium fascinated me,” she said.  (Sweeney is pictured above, left, with McKenzie Westmore, who appeared in the episode as a presenter at the Soapy Awards.  Westmore would later host Syfy's long-running Face Off.)

Before officially becoming a friend of Friends, Sweeney already had a connection to the beloved sitcom via her Days co-star John Aniston, who plays ruthless businessman Victor Kiriakis.  “I did have a connection to Jennifer, knowing her dad,” she shared.  “Jen and I talked about that a little bit.  Her dad is such a lovely guy, and a fun person to work with, with such a dry sense of humor.  That was another fun thing about doing Friends, making that connection.”

For the actress, Jessica Ashley is a role she’s happy to be reminded of with every rerun. "People tweet me all the time whenever the rerun is on or they’re watching it on Netflix,” she laughed.  "I do get that a lot.  It's hilarious because people are always like, ‘Wait a second, why was your hair red for that role?’

“The interesting thing about being on a show like Days for many years is you go through all of those young adult moments like wanting to change your hair,” she recalled.  “So those things get reflected on television and for sure you see yourself growing up.  Yes, I was a redhead for about two years, and I loved it, but it was just hard to keep the red hair up.”

Sweeney has her personal favorite Friends episode, the one with Susan Sarandon as Days star Jessica Lockhart (The One with Joey’s New Brain), and if you were wondering whatever happened to that Soapy Award, she can answer that, too.  “I did not get to keep the award after all that,” she laughed.  “That was a heartbreaker, but the memories of it were worth it.  It was just fun, and very much a wonderful learning experience, and I'm now forever a friend of Friends.”